Driving into the Future

A look at product liability, cyber risk, and the tipping point for insurance premiums on autonomous autos.
By Jack Sullivan Posted on October 28, 2020 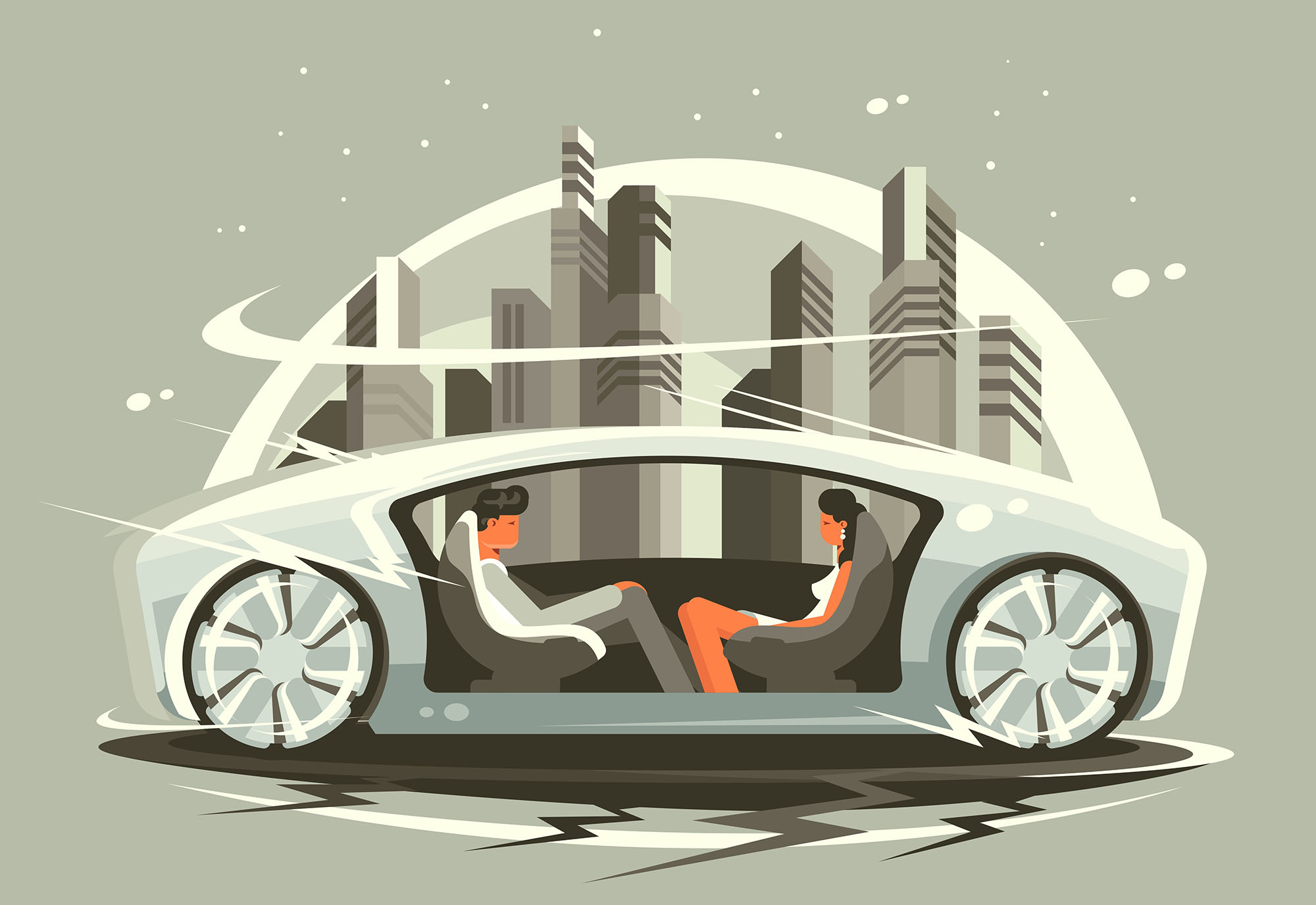 Autonomous vehicles (AVs) are often cited as a leading market disruptor, part of the constantly evolving internet of things that continues to cement a greater role in daily life.

Significant changes could potentially take place in questions of liability, as the line of causation between driver and vehicle is blurred. But according to some experts, that is just one piece of the coverage conversation. Areas such as theft and cyber, for example, take on new aspects of risk in an interconnected vehicular world.

Coming to a Highway Near You

And while autonomous vehicles will disrupt and transform the transportation value chain and human mobility, assuming they will be accompanied by a full shift to product liability ignores the messy and complex days of transition ahead.

“Product liability is not an effective way to compensate for the vast majority of accidents, as product liability lawsuits are onerous, time-consuming, and expensive,” says Pete Sexton, associate group general counsel at Travelers.

Leading personal injury attorney Ken Harrell of the Joye Law Firm agrees, citing that product liability cases are only brought in severe cases of death or catastrophic injury because the payout must be, at a bare minimum, commensurate to the cost of the case itself. These high costs make it so “you have to win,” says Harrell, and winning against a manufacturer is no small task.

That said, nuclear verdicts and social inflation continue to be in the conversation, including in the commercial auto space, with some citing rising litigation costs and dangerously distracted drivers as factors in rising premiums. Consider the case of a corporation being brought to court over the perceived failure of their technology to provide safety, with the result a tragic injury or death. Harrell, while remaining cautious anyone would like to admit fault to their new golden-goose product, still believes that “manufacturers have largely learned tough lessons brought from skipping corners in safety.”

In discussing the path to a liability transition, Harrell says, “We’re all going to be learning from scratch to resolve these issues,” while emphasizing the need for state-model legislation to help pave the way for product safety and regulation.

However, with new risk comes new opportunity. The potential is there for new products related to autonomous vehicles and suppliers and manufacturers’ need to further insulate themselves from heightened product liability.

Vehicles, autonomous or not, will still require types of coverage that have become mainstays in auto insurance coverage, such as issues related to weather and theft, Sexton notes. But even those require new considerations of risk. When your car is plugged in, theft takes on a whole new meaning.

As of March 2020, only 12% of U.S. drivers would trust riding in a fully autonomous vehicle, as reported in a survey from the American Auto Association. That’s just riding in it. When you own one and it’s hacked, trust takes on a whole new meaning.

Kate Jensen, senior associate in Steptoe & Johnson’s Government Affairs & Public Policy practice and a regular Leader’s Edge contributor, is no stranger to the complexities of autonomous vehicle ownership. When her own Tesla was hacked and then stolen, she realized the difficulty in attaining strong levels of trust around the sophisticated and oftentimes proprietary software in these vehicles. And once the vehicle’s cybersecurity is compromised in any way, regaining this trust is all the more difficult.

Theft by hacking is not as easy as recovering the vehicle and replacing the key. As thieves forego crowbars for laptops, the implications of theft are felt for longer periods of time as software damage reaches beyond tangible damage like broken windows or looted gloveboxes. With such complexities, trust remains far more difficult to gain, and more importantly, keep.

And as 5G grows into U.S. infrastructure, these personal cyber risks will increase, with autonomous vehicles becoming rolling mediums of personal identity information like addresses, voice recordings, call records, and even bill payments.

This is where, Sexton notes, “auto insurance is also able to adapt to new risks.” He cites the potential for folding personal cyber protection into auto policies.

Cyber issues in AVs may also bring the government into the risk management conversation. As noted during AON’s recent Data and Cybersecurity virtual conference, the rise of cyber related risks for autonomous vehicle owners will also expose government-level transportation infrastructure vulnerabilities, made increasingly bare due to the advanced nature of the technologies, which remain relatively vulnerable. The introduction and eventual implementation of 5G networks will heighten these vulnerabilities. Experts from AON’s panel agree that a public-private partnership will remain crucial to safeguarding the mass wealth of consumer data and information these technologies will collect.

So while much of the technology necessary is already there, as evident in Waymo’s level 4 autonomous vehicles, strong headwinds exist to gain consumer trust, protect personal information via the mitigation of cyber risk, and the implementation of state-model government regulation.

At the present, premiums on autonomous vehicles are strikingly higher than traditional autos, at least partially due to the cost of repair. For example, most Tesla exteriors are made out of aluminum, a comparatively expensive metal. Additionally, sensors and cameras are included in accident-prone areas of the car, thus making fender bender repairs strikingly more expensive.

That said, AVs are positioned to make roads substantially safer as lane assist, braking, and autopilot steering retract human error. To what extent remains undeterminable as “it is too early to say when or by how much, even with Advanced Driver Assist Systems (ADAS),” notes Sexton.

While many are hesitant to pin down a specific timeframe for a tipping point in auto premiums as it relates to the impact of AVs, Accenture estimates premiums will begin decreasing by 2035 due to the eventual decrease in individual policies and increased safety of autonomous vehicles. They likewise predict these premium decreases will be offset by new lines of coverage related specifically to AVs. However, at some point, these premium decreases will become greater than the offsets, which Accenture pins to begin in 2033.

An example of a lesser known new line of coverage that is likely to emerge is public infrastructure insurance that protects the state or federal government from accidents or damage caused by potholes, a low-profile hazard autonomous vehicles struggle to detect.

To understand the current landscape, consider the following chart, which highlights the five stages of vehicle automation. Currently, most new vehicles are classified as level 2, or semi-autonomous.

Once you take some human elements out of the driving experience, roads become safer, but more causation falls back on products that are in control of the vehicle. And while experts find it unlikely product liability will become the standard for the entire value chain, it does remain likely that Original Equipment Manufacturers (OEMs) as well as tier 1 and tier 2 suppliers will seek greater insulation from these risks.

Experts also agree it is unlikely that irrebutable presumption of human control—which would make the entire vehicle the human owner’s liability—will be adopted, as these complex technological machines pose too many factors largely unrelated to human performance. However, there could be grounds for negligence if one were to fail to download the latest software for their vehicle, causing a failure in the sensors. This is precisely the reason Britain’s Automated and Electric Vehicles Act 2018 excludes insurers from liability when the owner of the car fails to keep the vehicle’s software updated.

That said, states could increasingly adopt no-fault standards that set a minimum threshold that damages must meet before a claim can be brought against the party.

There is no shortage of legal hypotheticals surrounding autonomous vehicles, but consider an especially interesting one put forward by RAND Corporation’s white paper, Autonomous Vehicle Technology, which succeeds in capturing the complexity and uncertainty of future litigation:

“As more cars with this feature come to be on the road, pedestrians may expect that cars will stop, in the same way that people stick their limbs in elevator doors confident that the door will automatically reopen. The general level of pedestrian care may decline as people become accustomed to this common safety feature. But if there were a few models of cars that did not stop in the same way, a new category of crashes could emerge.”

Autonomous vehicles propose innumerable changes to the future of transportation, and while the whole value chain may not be flipped on its head for the insurance industry, effects on regulation, litigation, and safety will undoubtedly affect the way in which auto insurance is approached.