M&A is everywhere. What are your clients’ insurance risks when they get in the game?
By Adrian Leonard Posted on March 28, 2019 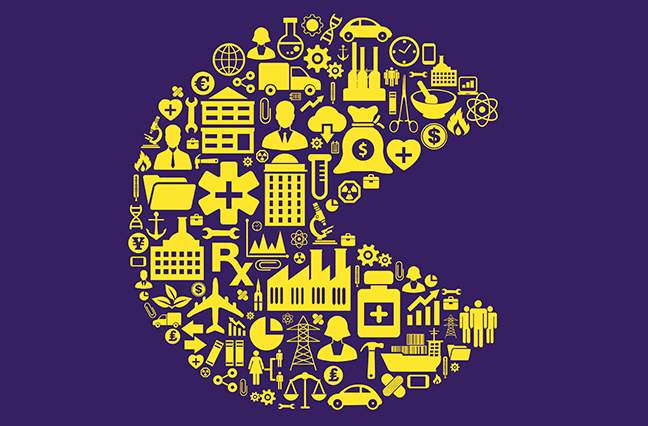 The world is merging.

Global M&A activity reached a new high in the first nine months of 2018, with deals worth nearly $3.3 trillion, fueled by high share prices and consumer confidence on one side and low interest rates and deal fees on the other.

The technology, pharmaceuticals and energy sectors led with mega-mergers, but few industries have been untouched by the urge to merge. Giants rule some sectors: for example, 60 of the world’s 100 largest shipping lines have disappeared since 1999. Industry and sector convergence are major themes. Valuations are higher than ever.

The ultimate goal of most mergers and acquisitions is the coveted notion of “synergy,” which, in practice, often serves as code for “cost savings.” Reduced expenses may be achieved through bulk buying, staff trimming, location consolidation—in general, by reducing the duplication of services within an enlarged corporation. According to Boston Consulting Group, which has tracked M&A deals since 1990, merged companies’ estimates of synergy savings have been on the rise since 2013. They exceeded the 10-year average of 1.6% of combined sales every year and peaked at 2.1% in 2017. Research by Deloitte has found that synergies are working: 88% of executives surveyed said their M&A deals are achieving expected returns on investment.

Risk management and insurance spending is one of many areas where post-merger savings may be possible. But when the integration is vertical and clients shift their activities up or down their commercial food chain, combining divergent insurance programs is usually much more difficult than it may at first seem. Value in incumbent programs may be lost, new exposure may unsettle existing underwriters, and dramatic changes in risk profile may change a deal’s economics.

Increasingly, they are performing some of the hands-on work, including even assembly. They now visit job sites, which changes and extends their risk profile. If the completed construction project is flawed, the newly cast design-build architects may be responsible for rectification costs. Their E&O cover will require a very different scope, since the evolved architectural specialists are now potentially liable for much more. Their insurance must have the wherewithal to put it right, and their broker the foresight to identify the exposures.

Because such strategic acquisitions are often executed without thorough due diligence, the buyer may find out too late that it has gained unanticipated and unfamiliar risk exposures.

The integration can go the other way, too, as a strategic rather than a competitive play. Suppliers within a manufacturing value chain may be (or may look) financially unsound. To secure their lines of supply, customers may simply buy them in an act of strategic vertical integration. That changes each firm’s risk profile, often dramatically for the acquirer.

Take, for example, a manufacturer of component parts for the automobile industry that finds itself in financial difficulty. The chief financial officer of a much larger car manufacturer may decide the most prudent course is to acquire its supplier in order to secure the flow of critical components. Because such strategic acquisitions are often executed without thorough due diligence, the buyer may find out too late that it has gained unanticipated and unfamiliar risk exposures.

In this case, the carmaker may have adopted a subsidiary that manufactures medical components. For the carmaker’s chief risk officer, product recall and liability risk in the medical sector will present a serious exposure and a new insurance challenge. A much larger company with far deeper pockets is also a greater target for compensation. The firm will have to present a very different liability profile and exposure to its underwriters. The CRO must now go to his specialist auto-sector insurance brokerage and ask it to solve a medical manufacturing exposure problem. Is that brokerage agile enough to keep that account?

Companies frequently acquire specialty exposures through the M&A process. Perhaps an acquired company comes with two corporate aircraft. The buyer now needs aviation insurance. Maybe it has overseas offices, and the buyer’s broker doesn’t do overseas. The enlarged company now needs to purchase and manage an international insurance program. Perhaps the incumbent carrier cannot support international risk, so this new subsidiary cannot simply be tacked on to the existing program. Meanwhile, the executives transported abroad to manage the new operation will need international travel and personal accident insurance and maybe even kidnap and ransom cover.

In this example, the broker must either construct a separate program and placement for the international risk or put the whole program out to tender to find another, probably larger brokerage, that can handle it. A European company acquiring a U.S. subsidiary will need a broker who can cope with U.S. workers comp risk and many other lines of business. The incumbent broker may need to find a partner to guide him through the local regulations and requirements, wherever that may be, or one that can tap into an international network. Even then, servicing issues will remain, alongside requirements for locally admitted policies. In the United Kingdom, employers liability, motor and some engineering coverages must be purchased locally. Britain also runs a national, mutual pool for terrorism cover that brings its own complications. All of these M&A ripple effects have financial implications. It also costs, in terms of management time, a difficult-to-quantify expense that is often overlooked.

If a business is purchased and rolled into an existing placement without extreme care, specialty coverage that underpins the business model of the acquired could be lost. Often the most mature insurance program, one placed with just one or two particular carrier partners, will be superior based on the length of the relationships and the incremental improvements made over the years to the coverage it provides. It can sometimes be critical, for example, to the saleability of an acquired company’s underlying products. Full due diligence is therefore essential, since ignoring special insurance arrangements can have far-reaching implications.

Sometimes a merger is known to be heading toward the ultimate spin-off of at least three separate companies following their initial integration. For a period after the acquisition, they will work together under a single corporate umbrella. Risk managers and programs for the individual companies may remain in place up until the ultimate reorganization and division. This approach is particularly common for venture capital and private equity acquirers.

But in this situation the client and broker face choices. Carrying multiple programs, even for a short time, may mean forgoing synergies. One option is to maintain existing policies and programs and make the effort to persuade the relevant carriers that, despite the corporate changes, they should extend their coverage. Another is to create, structure and place a new, overarching program that sweeps in the new subsidiaries and achieves cost savings, knowing that down the road they will be swung out again. But that approach proves a challenge, since it may be difficult to find carriers willing to assume long-tail liabilities in exchange for a one-off premium payment in the absence of a certain opportunity to recoup potential losses. The broker must walk a tightrope. A collaborative approach between brokers, clients and markets is most likely to achieve the best result for all interested parties, including shareholders.

If a business is purchased and rolled into an existing placement without extreme care, specialty coverage that underpins the business model of the acquired could be lost.

The presence of multiple captive insurers can make large corporate mergers even more complicated. Should the disparate captives be merged? Should the new parent assume the risk? Perhaps one or more of the captives should be shuttered, but legacy issues will remain. The easiest approach is to leave everything as it is and resolve issues through an accounting exercise. But if a new company is spun off and takes a legacy captive with it under a new management, despite having been formed for a different company and launched with different objectives, a new set of challenges may arise.

All of these hypothetical examples are in fact real and fall within the experience of John Eltham, head of North American business at Miller Insurance, the London-based specialist brokerage. The challenges will only multiply going forward, Eltham believes, and that requires brokers to be careful and informed. “We will see more M&A,” he says. “Japan’s economy is all about diversification. China, directly or indirectly through state influence, is looking to secure supply and influence. The Chinese sphere of influence is huge in Asia, and India will not sit back.”

One thing is sure: already brokers are feeling the effect of the huge consolidation trend sweeping industries worldwide and across borders. Larger, better-resourced brokerages may benefit, and the complex, sometimes labyrinthine insurance arrangements may be critical to the success of the underlying transaction.