Fear of the Unknown

There are five fears that may be driving the M&A marketplace.
By Phil Trem Posted on November 1, 2021 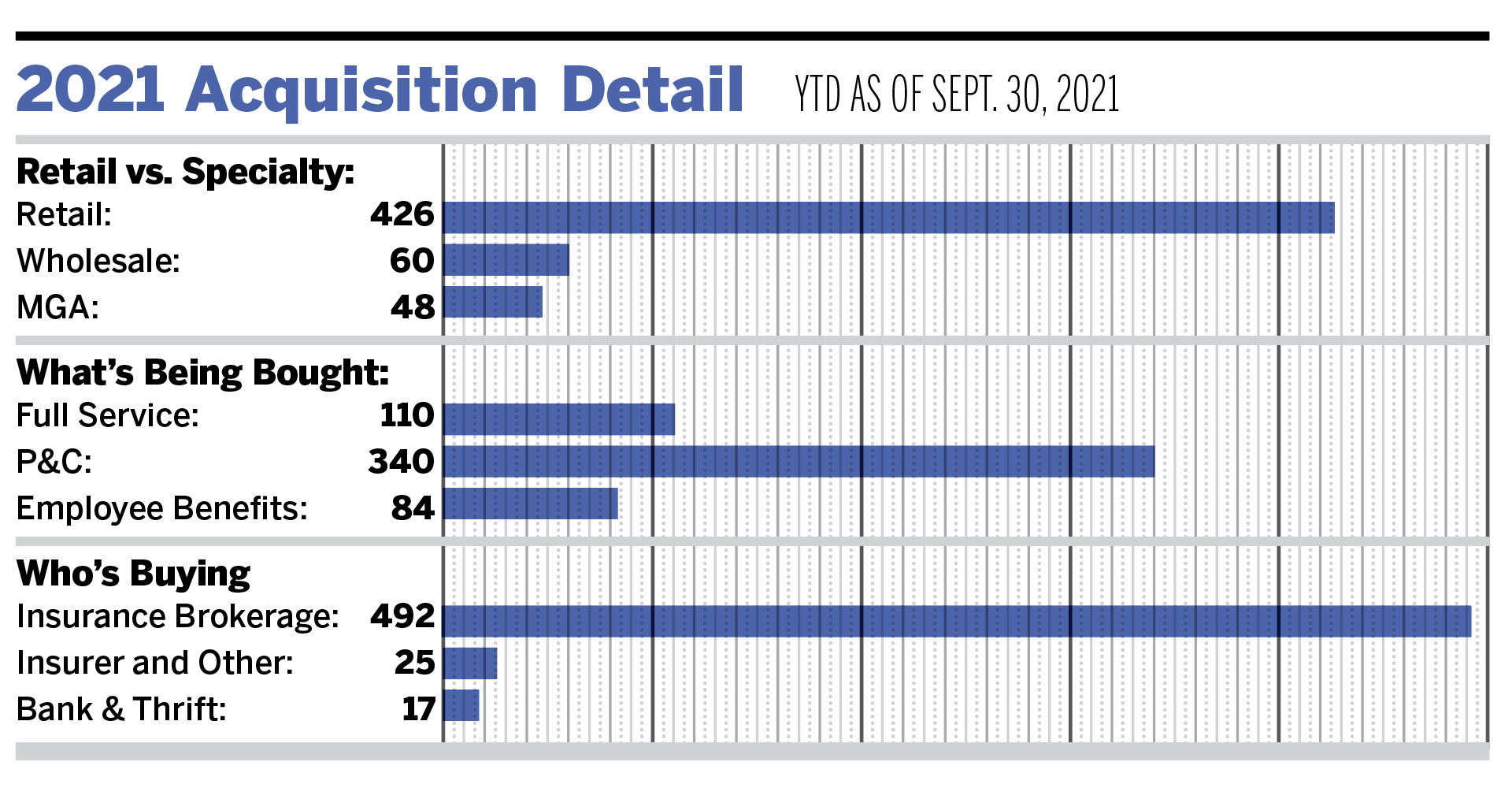 We are working through the last few months of what will undoubtedly be the craziest merger and acquisition year on record within the insurance distribution space.

Through September, there were 534 publicly announced transactions in the United States. That represents a 22.5% increase from the same time last year, which was the highest year on record with 711 announced deals. The question remaining is not if we will exceed that number in 2021 but, rather, how high the new watermark will be.

There are multiple drivers that explain why the year has been so active, but all can be tracked back to a consistent undercurrent across all parties. It may not be overwhelming, but there is a hint of fear running through the industry that is worth exploring.

Fear of Another Rough Patch: Since the Great Recession in 2008-2009, the U.S. economy had been growing at a fairly steady pace until the global pandemic began in early 2020. Insurance brokerages were enjoying consistent organic growth around 6%-7% for most of that pre-pandemic period. For firms that were leaning in and controlling their growth through constant reinvestment in people and value-added resources, their role as consultants and strategic advisors to their clients only grew. However, for those firms that were enjoying the fruits of the growing economy and hardening rate environment without doing much to evolve their business, the onset of the pandemic was like running into a brick wall. And it hurt.

Firms had to pivot to work remotely, work through premium payment extensions from carriers that threatened a once very consistent cash flow, face challenging questions and expectations from clients, and ultimately recognize that the business model they grew very comfortable with is quickly changing. The pandemic challenged us all, and many did not like it. The fear of having to go through that again has been enough to drive many firms to sell their business and ensure that their future is more secure being a part of a larger organization.

Fear of Investment:It is pretty clear that client expectations of their broker/advisor have become more demanding since the beginning of 2020. The industry was already moving to a more consultative approach, but clients seemed to get there much more quickly as a result of the pandemic. Firms are now faced with a question of whether to build out niche expertise, loss control and claims resources, and actuarial and captive capabilities or to build up their technology investment in order to compete within an increasingly competitive marketplace. Making the investment could shrink their bottom line or force them to consider addressing compensation questions internally to help cover the expense. It becomes a true build-versus-join question. Firms must be confident that, if they make the investments, they will be able to compete and grow through the investment. Without that confidence, many firms are choosing to join a larger organization that has already made the investment, allowing them to plug into a more robust platform.

Fear of Higher Taxes: It seems a foregone conclusion that the federal government will increase taxes somewhere to pay for the spending bill(s) being floated around Congress. The corporate rate could go up, pass-through entities are potentially going to be affected, individual rates might rise, and capital gains are likely going to increase. The thought of paying higher federal taxes has brought some to the table sooner than they may have anticipated. A number of firms that believe they might sell in the next three to five years are considering a transaction this year to be sure they capture the lowest federal capital gains rates that we will likely see for a long time.

Fear of Inflation: Whether real or not, there is a perception that inflation across the U.S. economy could result in a significant economic downturn. As costs rise, especially salary costs, at a greater rate than revenue growth, it could trigger a reduction in insurance exposure. If prices and wages rise and exposure bases are reduced, this could force a significant downturn in the sustained cashflows many firms have come to rely on.

Fear of Missing Out: FOMO is real—just ask anyone you know under the age of 30. With the continuously increasing levels of activity and multiples in the M&A marketplace, buyers and sellers are seeing transactions being completed and in many cases worrying that they are missing out. We are seeing a number of independent firms using arbitrage tactics—buying firms to roll up and achieve a higher valuation in order to then sell themselves. We are also watching private capital firms (family offices, private equity firms, etc.) pushing hard to enter the space as the competition for sponsor deals has heated up to levels we have never seen before. Minority investments by private capital firms are seeing little to no discount to a majority transaction, which is very rare but highlights the very attractive nature of the insurance distribution marketplace.

While most firms act out of a position of strength, this has been a very strange cycle in our lives. The world faced a traumatic global event that has shaken the broader business community. Some in the insurance community were prepared, but others were not.

While the pandemic and potential tax changes are driving high activity in 2021, there is not likely to be a famine of deals into 2022. The broader industry continues to evolve, and insurance brokerages are at an inflection point. The need to advance the brokerage business model will continue to keep M&A activity strong—before, during and after potential tax legislation. As you step back to think about your concerns, what are you afraid of? And more importantly, what are you going to do about it?

Disclosure: All deal count metrics are inclusive of completed deals with U.S. targets only. Scorecard year-to-date totals may change from month to month should an acquirer notify MarshBerry or the public of a prior acquisition. 2021 statistics are preliminary and may change in future publications.