As we approach producer licensing nirvana, the NAIC’s National Insurance Producer Registry is ready in the wings.
By Russ Banham Posted on October 30, 2015 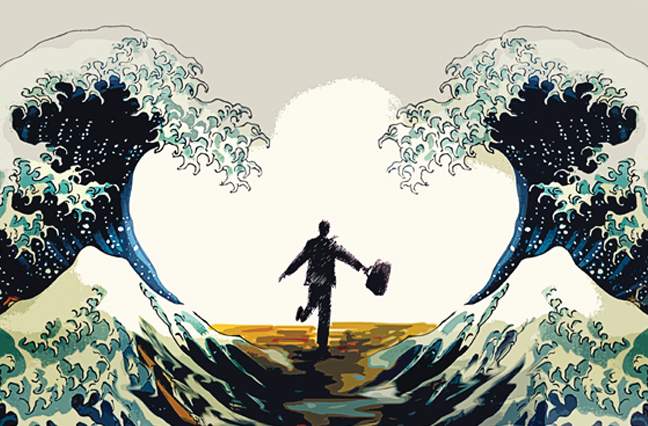 It has long been the bane of insurance brokers with business beyond their state borders—the costly and inefficient requirements imposed to obtain a non-resident producer license.

Over the past 15 years, state regulators have made limited strides to streamline this process. A particular leap was the development of voluntary reciprocal state licensing laws. The only drawback? A big one: Some states refused to participate.

Today the industry is at the threshold of finally putting this protracted problem to rest. The National Association of Registered Agents and Brokers Reform Act of 2015—NARAB II for short—mandates the development of a central producer licensing clearinghouse. An insurance producer licensed in his resident state will be able to obtain NARAB membership—essentially a license authorizing the producer to sell, solicit or negotiate in every other state where his clients conduct business.

Good stuff, but don’t pop the champagne corks just yet.

There remain a couple of NARAB II outstanding items that have yet to be ironed out. First is the composition of its 13-member governing board, appointed by President Obama and confirmed by the Senate. The board, yet to be named, is to be composed of eight current or former state insurance commissioners and five insurance industry representatives.

Another remaining issue is the actual mechanism to be used for licensure in non-resident insurance markets. It is highly likely, but not definitive, that the licensing process will be automated to ensure simplicity, low cost and ease of use. But the exact nature of applications and filings for licensure won’t be determined until the new NARAB board is appointed and makes the final decision.

A lot of people are looking at the National Insurance Producer Registry (NIPR), a nonprofit affiliate of the NAIC, as the natural choice. NIPR operates the Producer Database, an electronic database integrating participating state licensing systems into a single repository. Everything needed to make good on the intent of NARAB II is in place—except the go-ahead to use NIPR.

The idea has substantial support in the industry, but as Karen Stakem Hornig, NIPR’s executive director, acknowledges, “We can’t count our chickens before they hatch. It’s not a done deal. We can’t act like we have the job, even though lots of people think we should.”

Among those people is Albert “Skip” Counselman, chairman and CEO of insurance brokerage Riggs, Counselman, Michaels & Downes. “Having a single national database for non-resident licensing would be wonderfully efficient,” Counselman says. “And NIPR already has such a database in place.”

Others industry players agree. “Why reinvent the wheel?” says John Fielding, of counsel at law firm Steptoe & Johnson and NIPR’s vice president (Fielding represents The Council on the board). “Many people already are very familiar with NIPR because they and their staff use it every day. So do state regulators. I’m probably biased, but NIPR seems like the logical choice.”

The word on Capitol Hill is that various NARAB II board nominees have been selected and are undergoing FBI background checks. So it’s premature to predict if NIPR will be selected.

“It’s the board’s responsibility to make the decision about how NARAB will carry out its mission and the requirements of the legislation,” Hornig says. “My job is to have NIPR ready to present a vision for what we think NARAB could look like to the board when it is formed. We believe that NARAB fits perfectly well with NIPR’s mission, which is to make the [licensing] process more cost-effective, streamlined and uniform, benefitting both regulators and the industry.”

But nothing is certain, especially if a board member is a former regulator from a state that resisted streamlined non-resident licensure rules. Even industry members of the board may push back. More than three quarters of agencies have only a resident state producer license, and 17% have less than a handful of producer licenses. For them, non-resident licensing is not much of an issue.

“Despite broad industry consensus around NARAB II, there are definitely pockets of resistance,” confirms Joel Wood, The Council’s senior vice president of government affairs. Still, it is unlikely President Obama and the Senate would select a director from the industry or regulatory ranks whose opinions on the subject are divisive.
Another possible fly in the ointment is that NIPR may have competition for the task. There are several third-party software vendors capable of doing the job—from agency management system vendors, such as Vertafore, to providers of online continuing insurance education programs, like Kaplan. Even a provider of online licensing in another industry, like securities brokerage, could toss its hat in the ring.
There’s also the possibility the NARAB II board will decide to create its own licensing system. Fielding contends it’s not out of the question. “It’s up to the board to decide how to do what they are required by law to do,” he says. “They could build it from scratch or even set up a paper system. It’s completely up to them. The selection of NIPR is not a fait accompli.”

All of this explains why Hornig is not counting chickens—well, not yet. As she puts it, “I imagine we will provide services to NARAB II, offering the ability for producers to come to a NARAB website and apply for membership authorizing them to conduct business in non-resident states. We would then provide the software services that would process all the transactions and store this data.”

To turn these imaginings into reality, NIPR is drawing up the blueprints for what it would all look like. It’s a pretty bold vision, given the simplicity and straightforwardness Hornig has in mind. “The big picture is producers would still get their resident licenses from the states where they are domiciled,” she says. “But for non-resident licenses, the NARAB entity would be where you get the equivalent of a single license that authorizes you to sell insurance in all non-resident states where you are currently conducting business.”

This entity would be extremely lean—“a completely virtual, 21st-century operation,” she explains.

In other words, NARAB II would have its governing board and no other personnel or bricks and mortar. NIPR’s technology would be the gateway through which NARAB’s mission is realized.

“Software developers call this a ‘happy path,’ where code is written to get you from one point to another point, seamlessly and fast,” Hornig says. “We’re in an excellent position to do this because this is what we already do, providing transactional services for producer licensing, appointments and terminations through our producer database, which contains more than six million producer records. We are already this ‘happy path.’”

The Sooner the Better

The need for a uniform, consistent approach to non-resident licensing has never been in question. More than two million people and more than 500,000 businesses are licensed to provide insurance services in the United States. This number is sure to increase as commercial clients extend their wings geographically to other states and the brokerage industry continues to consolidate. Consequently, the 75% of agencies with just a single resident license are not likely to remain that way.

States enacting reciprocal producer licensing laws was a step to thwart the original NARAB approved by Congress as part of the Gramm-Leach-Bliley Act of 1999—now referred to as NARAB I. The act called for the creation of a national producer licensing organization (NARAB) but produced an escape route for the state insurance regulators. If a majority of states enacted reciprocal laws permitting an agent or broker licensed in good standing in his home state, he could be licensed in all other reciprocal states. This would be done simply by demonstrating proof of licensure and submitting the requisite licensing fee. At that point, NARAB would bite the dust. The states met that reciprocity requirement more than 10 years ago.

Yet even with the reciprocal laws, problems continued.

“We’ve got 200 people licensed here, and more than half are writing business in more than their resident state,” Counselman says. “Imagine if you had to get a driver’s license for every state you drive through and then maintain these licenses each and every year? We’ve had to employ a full-time person on staff here whose job is to help them get their non-resident licenses.”

On occasion a broker will learn that he had failed to acquire a non-resident license in a state where a commercial client, unbeknownst to him, is now doing business. “Most states are forgiving and give you time to put things in order,” Counselman says. “But, multiply this possibility by thousands of clients growing their businesses in the recovering economy. It’s a complicated mess.”

“I’ve heard nonstop for 23 years here at The Council about the astonishing hassles, administrative complexities and dollars needlessly being spent to remain compliant with 50 different sets of licensing rules and regulations,” Wood says.

NIPR already links state regulators with the insurance entities they regulate to facilitate electronic licensing and exchange of producer information. NARAB II would take that a huge step further. NIPR has no axe to grind, governed by a 13-member board that includes six NAIC members and six industry trade association representatives, of which three are producer trade groups (number 13 is the NAIC’s CEO, acting as an ex-officio voting board member).

Hornig also is well respected across state regulatory agencies and the industry. “Utilizing the architecture of NIPR under Karen’s dynamic leadership, NARAB should be highly successful,” Wood says. “NIPR already is processing more than 22 million licenses each year. NARAB will create the velocity for NIPR to become a clearinghouse, with NIPR given preemptory authority to issue licenses.”

A done deal? Like everything in politics and government, not by a long shot