What are the ESG impacts for companies that buy and sell Bitcoin?
By Zach Ewell Posted on October 8, 2022 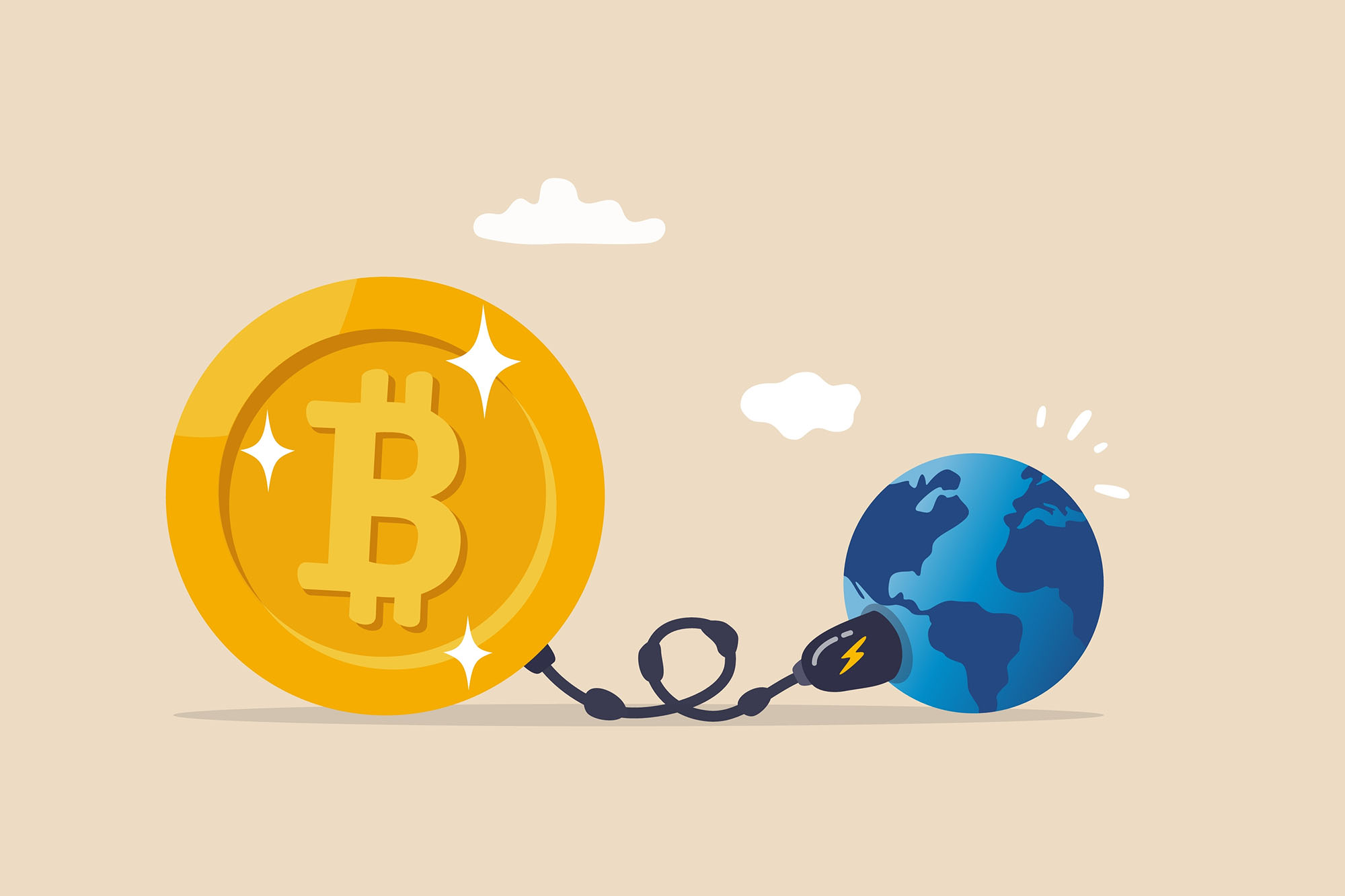 Companies and investors dipping their toes into decentralized finance (DeFi) face many risks that come with buying and selling cryptocurrency.

Fraud, D&O liability, and storage security are some of the most prevalent crypto hazards. However, a less apparent risk is the impact that their use of cryptocurrency has on the environment. Integrating cryptocurrencies such as Bitcoin into an organization’s business model can be a hidden, direct conflict with a company’s its ESG goals and sustainability practices.

The problem arises with the mining of the cryptocurrency. Bitcoin’s network, just like other cryptocurrencies, is classified as a digital asset and relies on a decentralized system made up of millions of computers around the world racing to mint and approve transactions. Because cryptocurrency lives on computers, it is highly energy dependent.

When a single computer manages to complete a task for the network, the owner of the computer is rewarded with a yield as compensation for the time and energy spent. Due to this decentralized nature and the demand, many Bitcoin mining facilities have been popping up all over the world. The problem is these facilities often consist of giant warehouses where thousands of computers run on power, nonstop. The higher the demand, the more power is needed to run the networks. While some of this power is generated through renewable energy sources, much of it is derived from burning coal. While there is no direct way to calculate how much energy is used for Bitcoin and cryptocurrency mining, according to the University of Cambridge, Bitcoin mining generates upwards of 88.8 terawatt hours per year, meaning it uses more energy than some entire countries.

Caught In The Crypto Crossfire

Companies pursuing ESG commitments are not the only ones caught in this crypto crossfire. According to a survey from the asset management firm Betterment, retail investors who consciously make an effort to invest in ESG assets are also very likely to purchase cryptocurrency. For ESG investors surveyed, 80% disclosed they also held crypto investments. What’s more, 96% of those same ESG investors also reported being aware of crypto’s environmental impact on the world.

One of the largest companies most publicly struggling between using cryptocurrencies and pursuing environmental sustainability is the popular electric car company Tesla. A few months after accepting Bitcoin as a payment method, Tesla suddenly halted all cryptocurrency transactions. The company explained it would continue to use cryptocurrency only when the mining of it proved more sustainable. “We are concerned about the rapidly increasing use of fossil fuels for Bitcoin mining and transactions, especially coal, which has the worst emissions of any fuel,” Tesla CEO Elon Musk said on Twitter. “Cryptocurrency is a good idea on many levels and we believe it has a promising future, but this cannot come at great cost to the environment.”

Leader’s Edge has previously written about the trends in ESG reporting, specifically on the Task Force on Climate-Related Financial Disclosures (TCFD) Framework. Following pushes from the Securities and Exchange Commission (SEC) and the Federal Deposit Insurance Corporation (FDIC) to expand company disclosures of climate-related information, cryptocurrencies—and specifically Bitcoin—could be a gray area for companies when reporting. The latest SEC proposed rule quantifies greenhouse gas emissions into three categories, the last of which requires organizations to report greenhouse gas emissions resulting from their supply chain.

If a company’s commerce relies heavily on cryptocurrency, would it have to disclose and quantify the heavy environmental impacts that come with buying and selling Bitcoin? Perhaps. But how? This question cascades into another dilemma when quantifying energy usage on a decentralized network: where do corporations go to find statistics to accurately report the environmental impact that their Bitcoin transactions have had? As most cryptocurrencies run on a decentralized network, there is often no central and certified figure or institution to accurately report the energy consumption and sources that digital assets rely on.

While there is no direct way to calculate how much energy is used for Bitcoin and cryptocurrency mining, according to the University of Cambridge, Bitcoin mining generates upwards of 88.8 terawatt hours per year, meaning it uses more energy than some entire countries.

This crypto ESG dilemma felt by both retail investors and corporations alike has bred new innovation. In an effort to stay decentralized and to take into account the environmental impacts of cryptocurrency, new eco-friendly coins have started to pop up. Although severely less prevalent in the decentralized finance market, eco-friendly cryptocurrencies have built-in qualities within their decentralized networks. Eco-friendly cryptocurrencies such as IOTA do not require miners to run their network. Another eco-friendly digital currency is Chia, which doesn’t require large computer processors to mine, thus allowing anyone with storage on their computer the ability to mine. One more major development within the ESG and DeFi space is the recent change to the world’s second most popular crypto, Ethereum. By implementing a new proof-of-stake system on its blockchain last September, the crypto provider claims it has reduced its energy use by 99.95%.

Another route ESG investors and corporations could pursue to make their investments more sustainable is by addressing mining facilities themselves. Last year the publicly traded, clean-energy, Bitcoin mining company Bit Digital announced a partnership with an independent ESG firm to provide transparency to its investors. The hope is that Bit Digital’s ESG rating will allow it to improve the impact the mining company has on the environment.

By centering cryptocurrencies on renewable energy, decentralized networks and mining facilities would face less of an environmental burden. This marriage of green energy and decentralization could allow companies and retailers to rest at ease instead of having to choose between sound ESG practices or using cryptocurrency as a business tool. Only time will tell.