What are NFTs and how might a market develop?
By Zach Ewell Posted on November 19, 2021 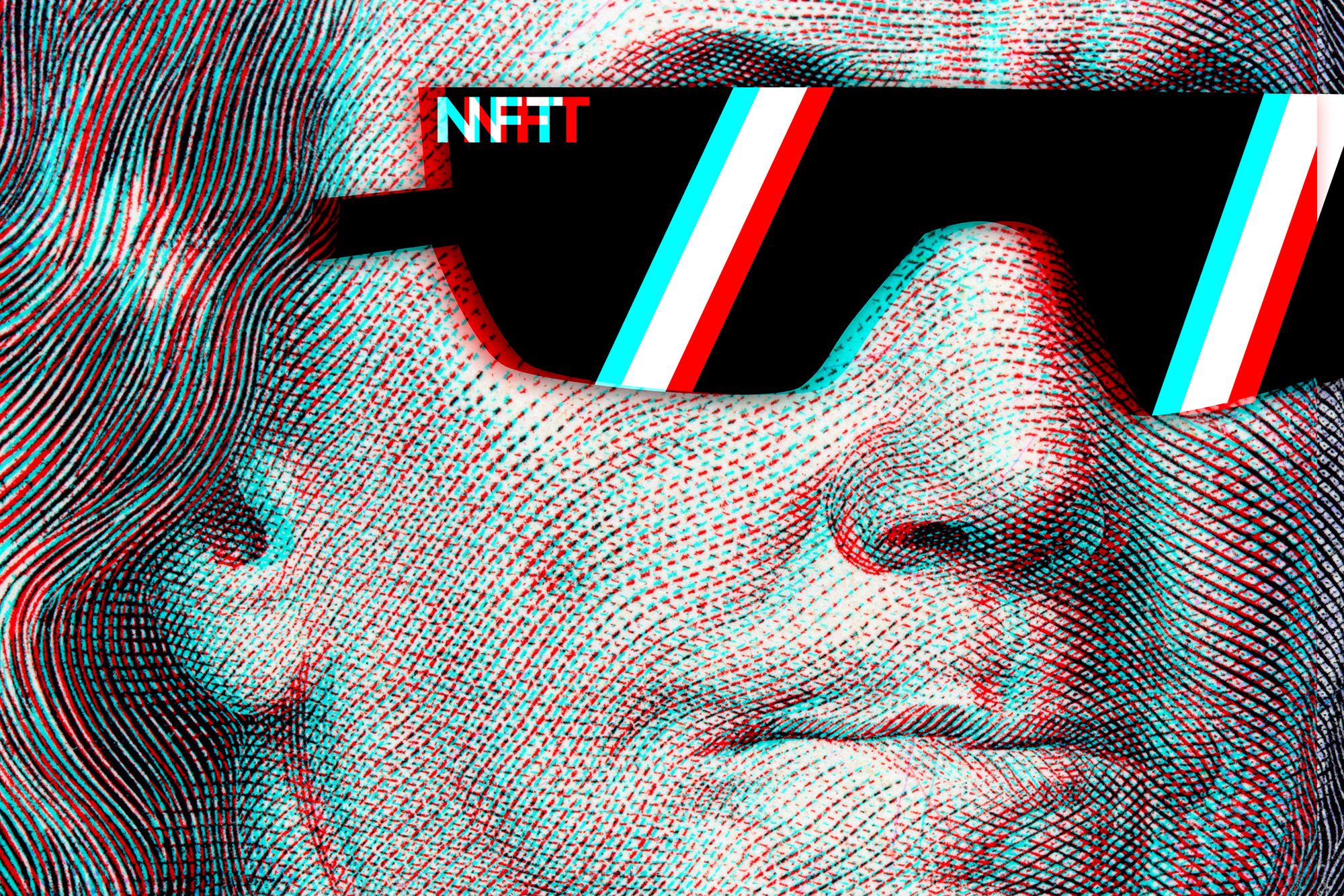 Right after the GameStop short squeeze of last January and before the cryptocurrency market tanked and rebounded again this past summer, Non-Fungible Tokens (NFTs) became the next big investment craze for new and young investors.

During the first quarter of 2021, NFTs generated $2 billion in sales, according to CNBC. Nearly a month later, the average price for an NFT would fall almost 70% according to Bloomberg. Despite the prices of NFTs bursting, they have started to gain momentum again. According to DappRadar, NFT sales volume hit a record high in the third quarter of 2021, generating $10.67 billion, a 704% increase from the previous quarter. Last August, Visa also purchased an NFT for $150,000. With many eyeing the rewards that NFTs could bring them, what do companies and investors need to know about their risks before they buy?

According to Coinbase, NFTs are a kind of cryptoasset in which each token is unique—as opposed to “fungible” assets like Bitcoin and paper money, which are all worth exactly the same amount. Because every NFT is unique, they can be used to authenticate ownership of digital assets like artworks, recordings and virtual real estate.

“Ultimately an NFT is like a smart contract,” says Honor Palmer-Tomkinson, fine art account handler at Howden Broking Group. “It’s a way of showing authenticity and original ownership. So, although NFT’s are widely understood as related to the art market, and to the art world, they can be applied to anything. An NFT is a digital stamp. It’s separate to the artwork.”

When it comes to calculating the risk involved with protecting NFTs, Palmer-Tomkinson says the question of valuation becomes a huge issue for insurers. “How do you base valuation for digital artwork?” she asks. “If I’ve got a painting by Picasso, there’s so many things to that painting that build and contribute to its value. How good is its condition? How rare is it? How many are there in the world? All these little elements add up to the value of that painting, whereas an NFT has none of that. I could go online and download ‘The First 8000 days’ and put it up on my wall. And I have access to that image. But then, on contrasting views, that would be the same for the Picasso. I (can) print that out and put it on my wall, and it would look exactly the same as the classic print signed by Picasso. Yet the Picasso print signed by the Picasso is the original. I think there’s that push and pull with NFT’s as to valuation.”

When bitcoin first came out you could buy them for something like five pounds. And then all of a sudden there was a massive boom. People were selling their Kensington townhouses for a few bitcoins. It went up and down and then it leveled out. And this is the same thing for NFTs. I think people need to be educated about it.
Phoebe Kirk-Fraiser, bid major at Howden Broking Group Limited

NFTs do have potential beyond art. Benjamin Peach, associate director of digital assets at Aon, says NFTs could be used as reward programs or even coupons. “Let’s say if you shop more with British Airways or with a specific supermarket, you could in turn receive bonuses, royalties or rewards that you could use in store or for purchase,” Peach explains. “From a company’s perspective, the enticement for the average consumer to purchase goods or services with these businesses becomes a little bit more interesting, because then you have a viable marketplace to actually exchange these NFTs for real money or other cryptos.”

Currently well-known brands and musical artists have begun to cash in on the NFT market. The National Basketball Association recently created its own NFT collection called Top Shot where fans can buy, collect and trade videos of the NBA’s most celebrated moments and plays. Meanwhile, well-known rock band Kings of Leon sold its latest album When You See Yourself as an NFT last March which gave fans future live show perks, such as front row seats for life and exclusive art.

NFTs don’t have to just be used for profit. Conferences such as HLTH: Create Health’s Future, auctioned off digital trading cards to raise money for its foundation as well.

Very similar to how Bitcoin, Ethereum and other cryptocurrencies are stored, NFTs are primarily kept in a digital wallet by a vendor or online space that can act as a marketplace and mediator between people both issuing and purchasing digital assets. OpenSea, Nifty Gateway and MakersPlace are just a few of many online marketplaces were NFTs are bid on, sold and stored.

For businesses that store NFTs, cold storage is one of the most secure ways of collecting digital pieces of artwork. Similarly used with cryptocurrency wallets, cold storage refers to storing NFTs offline.

Digital wallets that store NFTs can either be custodial or non-custodial. Similar to a bank, a custodial wallet allows easy access to an NFT, which can be held on a marketplace’s website. A non-custodial wallet, which resembles more of a personal vault than a bank, is a more personalized system where owners of digital art are tasked with the responsibility of knowing and holding their own digital keys; data that will allow them to access their NFTs without the worry of relying on others to store their digital assets.

Because cryptocurrencies and NFTs can both be stored on digital wallets their risk exposures are very similar. According to Howden’s Palmer-Tomkinson, the London specie insurance market holds a capacity between $800 million to over $1 billion for covering crypto and NFTs in cold storage custodian wallets. “The underwriters that I work with would write a policy in exactly the same way (as cryptocurrencies) to cover NFTs stored on a private key in cold storage,” says Palmer-Tomkinson. “But in order to write a policy the custodian needs to prove that they have a Russian doll level of security with several different people needed to decrypt the device that holds the key on it.”

For a marketplace or issuer of NFTs, the devil is in the detail. An NFT typically is tied to its own blockchain. However, what if the blockchain smart contract is faulty? What coverage should a token issuer be taking out to protect themselves from the legal ramifications? “This is what we call professional indemnity slash technology, error and omissions,” Peach said. “This policy slightly differs from the cyber policy. Let’s say you’ve created an NFT, and there’s an error in the code or a bug within the smart contract, which basically means the NFT can be replicated 100 million times. And then, people are exchanging that, while you essentially were meant to have one finite original NFT. Taking out that policy will protect you against third party legal action for building the smart contracts and building the crypto tokens wrong.”

Just like the cryptocurrency market, the NFT space has its growing pains. One unique issue to the NFT market is that anyone can create NFTs on these online marketplaces. “These platforms are just allowing any artist to issue their own NFTs and then remove them as and when they please,” says Peach. “Insurers will be very skeptical about coming into this industry and insuring it until these platforms actually have some proper oversight.”

In addition to NFT platforms, allowing just about anyone the ability to issue a piece of digital art, marketplaces themselves have had problems with insider trading. Last September, the NFT marketplace OpenSea admitted to one of its employees trading NFTs for profit on its platform, according to CNBC.

Right now, NFTs are still fairly new to the blockchain space and the financial world. Through trial and error and federal guidance, the NFT market has the potential to blossom in the future. “When bitcoin first came out you could buy them for something like five pounds,” says Phoebe Kirk-Fraiser, bid major at Howden Broking Group Limited. “And then all of a sudden there was a massive boom. People were selling their Kensington townhouses for a few bitcoins. It went up and down and then it leveled out. And this is the same thing for NFTs. I think people need to be educated about it.”