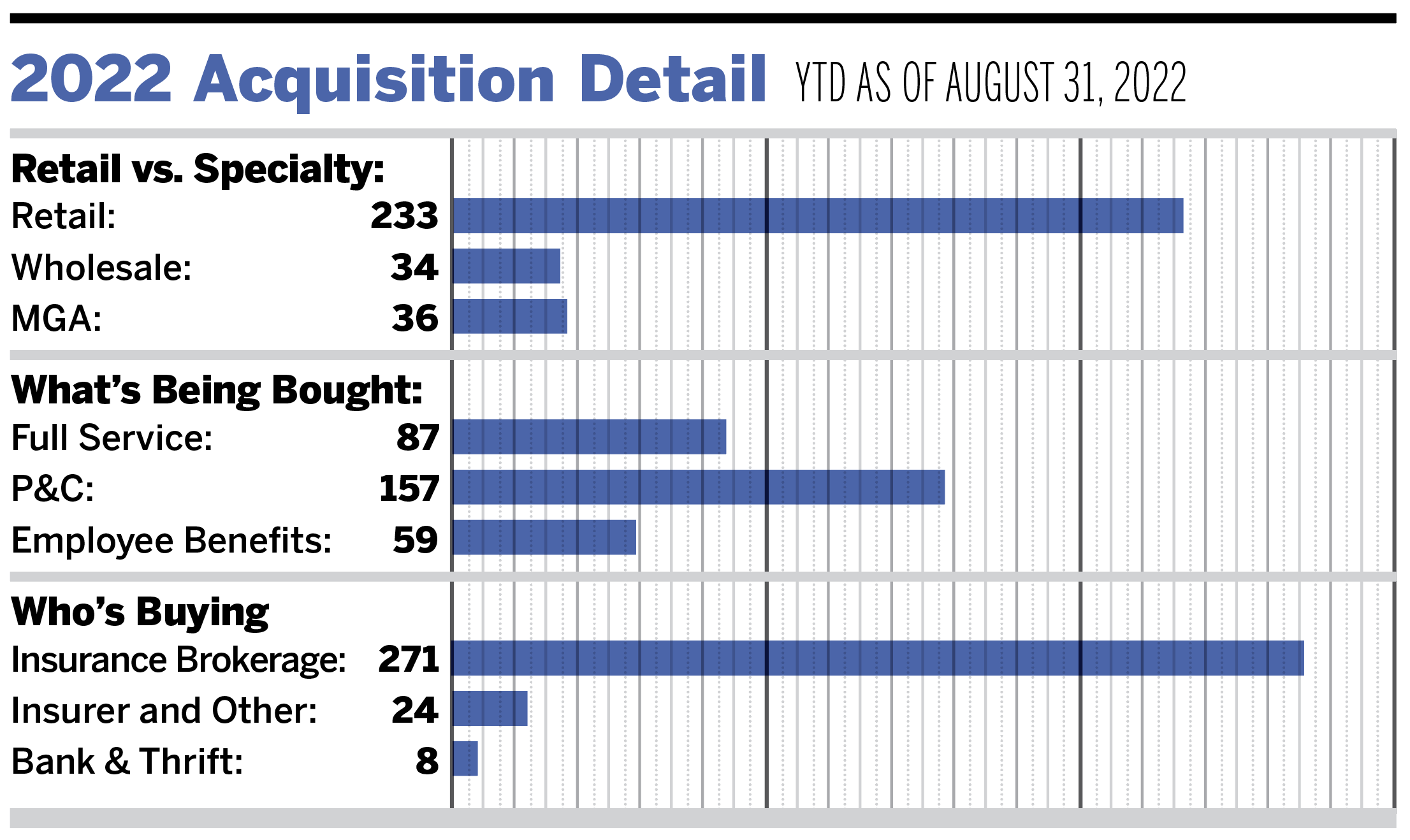 Despite continued concerns about the U.S. and global economies, rising interest rates to combat inflation, and volatility in the stock market, merger and acquisition activity is still robust, with 40 transactions announced in August.

While still behind in the year-to-date total compared to 2021, it’s a bit unrealistic to compare 2022 to the record-breaking total of the year prior.

It didn’t help that the 2022 deal count got off to a sluggish start following the year-end blitz of 2021. The rush, which was based on tax concerns, drove many deals to close in fourth quarter 2021 instead of first quarter 2022. However, the rolling 12-month average for transactions is still roughly 60 per month if you include the record-high 183 deals in December 2021.

Even with rising interest rates, buyers still appear poised for aggressive dealmaking as they look to deploy dry powder into attractive investments. But if interest rates continue to rise and market conditions deteriorate further, it could impact the availability of debt and, thus, the pace of transactions.

As of Aug. 31, 2022, there have been 303 announced M&A transactions in the United States. The current volume of deal announcements represents a 28.7% decrease compared to this time last year. However, the number of announced transactions is expected to increase as year-end approaches.

Even with rising interest rates, buyers still appear poised for aggressive dealmaking as they look to deploy dry powder into attractive investments.

Private-capital backed buyers accounted for 224 of the 303 transactions (73.9%) through August, remaining atop the various buyer classes. This trend is expected to remain consistent throughout the rest of 2022. Public brokerages have remained consistent with last year in terms of total deal count, making up 6.9% of total announced transactions.

Another trend that continues is the increase in specialty transactions as a percentage of the total number of announced transactions as traditional retail brokerages expand into the wholesale and delegated authority space. Specialty firms have been attracting a much broader crowd of buyers. Along with retail firms that are interested in specialty, there are private equity firms, carriers and other specialty brokerages looking to make deals for specialty distributors. Deals involving specialty distributors as targets currently account for 22.8% of the total 303 deals year to date.

Strong deal activity from the marketplace’s most active acquirers remains constant through August. Ten buyers accounted for 54.1% of all announced transactions observed, while the top three (Hub International, BroadStreet Partners, and Acrisure) account for 22.8% of the 303 total transactions.

Aug. 8: Truist Insurance Holdings announced it had signed a definitive agreement to acquire BenefitMall. BenefitMall is the nation’s largest benefits wholesale general agency and provides group benefits to small and midsize businesses throughout the country. The transaction will add approximately $150 million of annual revenue to Truist’s wholesale division and is expected to close in the third quarter of 2022.