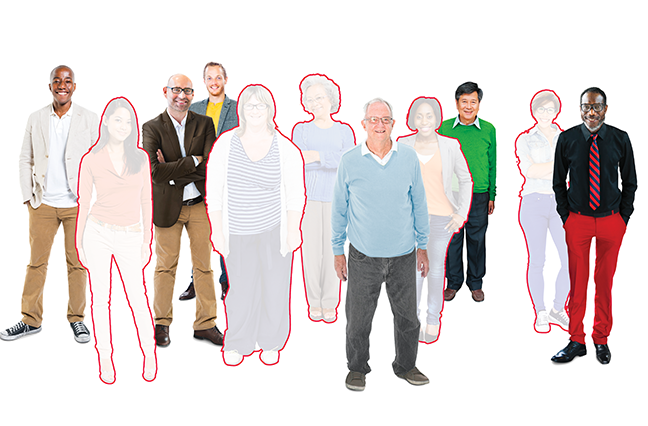 Traditional long-term care insurance has been plagued by a series of increased premiums, reduced benefits and consumers leaving the market altogether. Yet every day 10,000 baby boomers turn 60, and most will require long-term care during their lifetime.

The problem is a double-edged sword for women, who traditionally have become unpaid caregivers when a family member or loved one suffers a long-term care event. Compounding the problem, statistics show, women outlive men, make less money than men and are more likely to need long-term care than men.

Consider the impact of long-term care events on women:

To top it off, some complain insurance brokers and other financial advisors don’t even know how to discuss the topic with women. Pat Foley, OneAmerica’s president of individual insurance and retirement insurance, says financial services professionals have yet to learn how to approach this giant potential market.

“Women tend to be the caretakers in the family, but many times, the financial services community isn’t talking to the women about the insurance solutions that are available,” Foley says. “They tend to talk to the men about the financial situations the family needs…more than they talk directly to women.”

This is important because, according to Wendy Boglioli, a certified long-term care agent and healthy-aging advocate, women are the most likely to need care themselves. “Women take care of everybody else because we are the primary caregivers in this country,” Boglioli says. “We are also the primary recipients who are going to need healthcare in this country. We are going to live, on average, 19 years without our spouse, either through death or divorce. Women have to pay attention.”

Boglioli can’t understand why more professionals don’t recognize the financial opportunity women represent. “The women’s market is not a niche market,” she says. “We are the market. “Women over 50 years old control more than $19 trillion. They own more than three quarters of the nation’s wealth. This is a huge segment that has more spending clout than anyone else, and those are baby boomer women.”

It’s Not Just a Woman Thing

But the shortage of coverage extends far beyond just women. The U.S. Department of Health and Human Services estimates 70% of Americans older than 65 will require at least some type of long-term care. In 2015, there were 47.8 million people age 65 and older, accounting for 14.9% of the U.S. population, according to the U.S. Census Bureau. The 65-and-older population is expected to jump to 74.1 million by 2030 and 88 million by 2050. Yet only 4.8 million people were covered by long-term care insurance in 2014, according to the Life Insurance and Market Research Association.

The traditional long-term care market was primarily based on a policyholder’s health and several pricing assumptions that have turned out to be wrong. As a result, many of the original policies have experienced hefty premium increases and decreased coverage. Many insurance carriers have also left the market.

Into the vacuum a new type of product has emerged. So-called asset-based policies (also called hybrid policies) are offered on a typical life insurance or annuity chassis with riders attached to allow the policyholder to access the death benefit early for use on long-term care.

“It’s a little bit different than stand-alone because there is a death benefit,” says Dennis Martin, OneAmerica senior vice president for product and business development. “It’s not a use it or lose it. It’s more of a value-driven sale than it is a price-driven sale. People don’t want to pay money for something they think they might not need.”

That “use it or lose it” philosophy contributes to the downfall of the traditional long-term care policy. Dean Harder, an agent focused on retirement at the OYRI Group, likens the growth in asset-based long-term care sales to more consumers becoming educated to alternative approaches to long-term care. “If we go back 15 years ago, long-term care insurance was a very hot topic,” Harder says. “But what happened is that solution was filled with all kinds of fail points, and those fail points have come to fruition.

“Until it was proven that the world was round, it fell on deaf ears. Once it became clear the Earth is not flat, it took nothing for everybody to get on that side. What’s happening is the only story people really know is the health-based or traditional-based long-term care insurance. People don’t know the round world, which is the asset-based. It’s becoming more and more popular.”

The emerging popularity of hybrid policies comes at a good time, says Jesse Slome, executive director of the American Association for Long-Term Care Insurance, but it may not be enough to head off a coming crisis.

Michelle Prather, OneAmerica national accounts vice president for the bank and credit union channels, says a product known as Care Solutions—a variety of long-term care offerings that can be life insurance- or annuity-based—appeals to men and women. “The asset-based options we offer, where you get something whether you live on it or die and you leave it to someone, make a lot of sense to both males and females,” Prather says. “Males are, ‘Hey, I’m a built guy. I’m not going to need this.’ Well, that’s great. You have lived your life, and you pass on a contract to someone else so you haven’t wasted that investment. But ladies also have the peace of mind knowing that they have something there to take care of them when or if their spouse dies. They know they are not going to be a burden on anybody else and have all the power to make decisions about how they want to be cared for. We provide a lifetime source of income to pay for that care so that they have choices and dignity in how they are being taken care of.”

A recent white paper from Wade Pfau, a professor of retirement income at the American College of Financial Services, and Michael Finke, the dean and chief academic offer at the college, shows the advantages an asset-based policy has over traditional policies as well as self-funding a long-term care event.

The two compared asset-based policies with traditional policies and self-funding to see how a hypothetical long-term care event would affect each approach. What they found was that both comparable health-based and asset-based long-term care policies reduce the net costs of long-term care when a qualifying event has taken place. But the death benefit and the fundamentally high-deductible nature of the asset-based policy allow similar protection at a noticeably lower cost in the event that no qualifying long-term care event takes place. In both cases, knowing there is insurance available to cover major costs may free more assets to be truly liquid rather than serving as unnecessary contingency funds.

“Of course, both end up reducing costs dramatically for an expensive event versus funding for that on your own,” Pfau says. “I guess in some sense I was surprised at how much more effective the hybrid policy can be, especially on the two extremes. With no qualifying long-term care event, you get a death benefit that helps offset some of the cost. But then, with an expensive event, the hybrid policy also helps to reduce costs relative to a traditional policy.

“It’s going to be this new approach of developing hybrid policies that can really move the needle. With more and more Americans reaching the age of needing long-term care and fewer working-age people to provide that care, anyone who can afford to might feel better off if they can pay for private care versus going into an increasingly strained Medicaid facility.”

Finke says the hybrid policies, particularly the OneAmerica unlimited benefits option, provide financial protection in the event of a long-term care event that lasts for years.

“Compared to traditional long-term care that doesn’t incorporate any life insurance element, it is a comparatively efficient way to fund long-term care expenses,” Finke says. “Particularly if you choose the option to have unlimited coverage; it covers a significant amount of expenses for those who experience a prolonged care event.

“It’ll cover a good chunk of your overall long-term care exposure, and you can often cover the rest with Social Security and other forms of guaranteed income, and it prevents you from having to deplete your nest egg.

For a relatively modest amount of money, it’s a good way to hedge against that risk of a severe long-term care event while still providing a death benefit if the insurance is not needed.”

“Approaching women directly about financial topics is not something that has historically been done,” Foley says. “I think that’s changing as we get more women in financial services roles, but I think we’re leaving a lot of the marketplace untapped because of the demographics of the financial services community.”

Chris Coudret, OneAmerica vice president and chief distribution officer for Care Solutions, agrees. “Some of the professionals have a stereotype of long-term care,” Coudret says. “They view it as nursing home insurance and that the other people who sell that type of insurance aren’t as sophisticated. But today, it is a financial product that is for those who are middle- to upper-income, who have income.”

Boglioli says there is a need for more female financial professionals. “It’s a great opening for financial professionals and for women coming into that career because it is so needed,” Boglioli says. “Women listen differently. They prepare for their client meeting differently. It goes back to education. A lot of advisors too often look at it as a sale and the sale didn’t work out. Women don’t make up their minds like that. We take our time.”

Tracey Edgar, vice president of national accounts and head of the brokerage channel, says women may be better than men at selling long-term care.

“I think the long-term-care product itself, because it is a heart product and not so much a logic product, is going to be better sold by women in the long run,” she says. “I think women have a unique way of talking about long-term care. I would say that many men are going into the discussion talking about the financial implications, where I think a woman is going to talk more about the impact to a family member. There’s a big need for this message to have more women in financial services.”

Brokerage Ops You Should Know Me Better by Now
Take the first steps to building a customer-centric insurance experience.
Brokerage Ops Strong Start to 2021
The insurance M&A market appears resilient to economic drag.

Brokerage Ops Curiosity Killed the Cat. Or Did It?
Organizations that encourage continuous learning will reap the benefits.

Brokerage Ops The Risk of Being the Bearer of Bad News
“Shooting the messenger” is more than a metaphor; it’s...

Brokerage Ops Pandemic Sparks Service Model Creativity
COVID-19 pushed the work-from-home model forward at breaknec...
Sponsored By Patra
The insurance industry broadly is not known for leaning into innovation, nor is it overly diverse in representation. As such, the BrokerTech Ventures Innovation & Inclusion task force enlisted the help of Shelly Bell, founder and chief executive officer of Black Girl Ventures. BTV believes there is not only an opportunity but an obligation to elevate the understanding of inclusion for the future of the industry.
Brokerage Ops A Virtual Fireside Chat on Diversity, Inclusion & Innovation