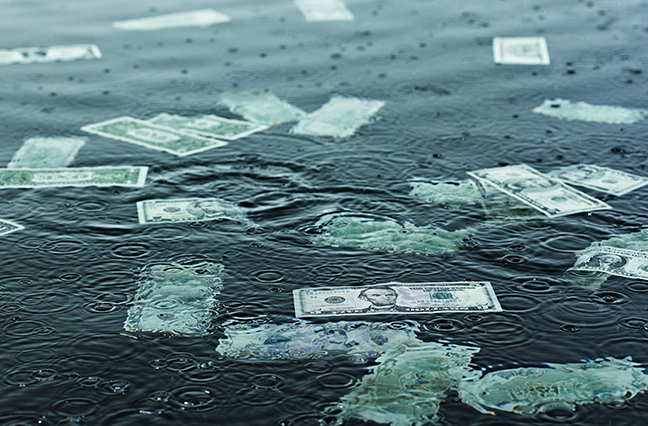 Arriving in such close proximity to each other, Harvey and Irma will likely be paired in the annals of hurricane history, much like the successive storms that hit the Gulf in 2005. But that doesn’t mean the damage they caused is the same.

In fact, they’re a bit of an odd couple in terms of the forces they packed and the territory they covered, and that means they will have different impacts on different types of insurers.

After Harvey made landfall in a relatively remote part of South Texas, largely sparing Corpus Christi, it quickly became a rainfall event. “We’re going to look back upon Harvey as a rainstorm that coincidentally had a hurricane associated with it—it was just a coincidence,” says Tom Larsen, principal of industry solutions at CoreLogic.

The storm system sat on the Texas coast, bringing with it “a significant amount of rainfall way beyond what you’d see with a typical storm…. The level of flooding in Houston was a surprise,” says Larsen. “Surprises are never good.” The record rainfall meant a lot of bayous overflowed, which added to the flooding.

“The very interesting thing about Harvey, which is very unusual, is the bulk of the private insured loss is commercial and industrial…because those are the properties that are likely to have private flood insurance,” says Karen Clark, president of Boston-based catastrophe modeler Karen Clark and Co. The next highest is auto. Residential is third.

We’re going to look back upon Harvey as a rainstorm that coincidentally had a hurricane associated with it-it was just a coincidence.
Tom Larsen, principal of industry solutions, CoreLogic

Irma moved faster than Harvey, Larsen says, and the levels of flood in Florida didn’t approach the surprise of Harvey. “The extreme flooding from Irma was up in the Jacksonville area,” he says. “It was geographically constrained.”

As far as auto claims, Clark says, Florida likely experienced less auto loss because autos are more susceptible to flooding. “Irma will be more typical for a wind event in terms of losses, with residential claims first, then commercial, then auto,” Clark says.

Mark Dwelle, an insurance analyst with RBC Capital Markets, says offshore losses caused by Irma comprised a sizable portion of the loss on top of the domestic loss.

“Given the structure of the Florida market, with so many monoline insurers, there will be a much higher reinsurance component to the overall loss,” Dwelle says. “Our sense is that commercial pricing could firm up a little, but in the loss-affected lines, mainly property and reinsurance rates will probably rise in the loss-impacted zones, Florida and Gulf. The hard part to gauge is whether that will be enough to move the needle globally for reinsurance rates. Definitely the comments coming out of the Monte Carlo Rendez-Vous were not overly bullish relative to what we’ve heard from other big events.”

The possibility of more significant hurricanes this season could portend a shift in market conditions after years of a soft market, says Evan Taylor, a risk consultant with NFP. “If you had a few really awful hurricanes, that would really do it,” he says. “If you stack several hurricanes and get a lot of property loss, it could definitely change the renewal cycle for the next several years.”