The Last Mile Begins Many Steps Ahead

In the wake of a catastrophe, it takes painstaking planning to be there for clients.
By Mark Hofmann Posted on October 27, 2017 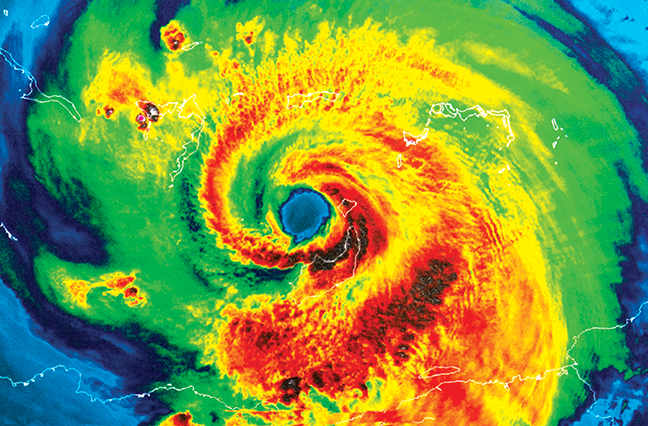 The morning following Hurricane Irma, Kathy Richichi surveyed the damage to the Marina Bay Club in Naples, Florida, where she is the community association manager. There was a floor-to-ceiling glass wall that had been sucked out and smashed all over the pool deck. The roof of the gazebo had blown off, and more than 500 roof tiles were damaged or ripped from the condo roof.

In the aftermath of disaster, people look for ways to help those who are suffering. There are many options, from on-the-ground aid to sending supplies. One of those behind-the-scenes efforts is being carried out by the Los Angeles-based Insurance Industry Charitable Foundation.

According to the IICF, by mid-September more than $410,000 was raised through the IICF Hurricane Harvey Disaster Relief Fund. By that time, the Harvey relief effort had received contributions from more than 1,000 individuals as well as insurers, agent and broker groups, and others.

The foundation also established the IICF Hurricane Irma Disaster Relief Fund in mid-September to respond to the needs of victims of that hurricane.

The foundation said $7.4 million in initial relief fund support for Hurricane Harvey had been committed by IICF board companies and supporters. The amount is expected to increase as giving and matching campaigns continue. Taking into account donations from companies not involved with IICF, the initial minimum collective insurance industry support exceeded $15 million.

“With Hurricane Irma following so closely behind Harvey, there is unprecedented need for support of the community at large, and those involved with the IICF have answered the call without hesitation,” said Bill Ross, CEO of the IICF.

She wasted no time calling Laura Ambrose, the Brown & Brown agent who handles her account. “She answered the phone, and she was right there for me,” Richichi says. “Ambrose is not just an insurance agent; she is a really caring, open person. It isn’t just about the job. There’s definitely a personal touch…. She’s just an easy person to talk to. She answers every question without hesitation.”

Richichi rode out the storm on the property, an experience she describes as tough and scary. In addition to enduring the hurricane, she brings to light the many difficulties that arise in the aftermath of a natural catastrophe. The lack of electrical power, for example, meant no relief from the heat of Florida in September. It also meant her neighbor was temporarily stranded in her ninth-floor apartment because there was no working elevator to transport her child, who has a disability and can’t walk down the nine flights.

Ambrose is part of the Brown & Brown team in Naples that powered up the day after the storm and worked with a skeleton crew to respond to clients such as Richichi. She and other agents working through natural catastrophes must be able to respond immediately after an event to help clients with claims issues, and their work often starts long before a storm makes landfall.

“I look at myself as partnering with them,” says Ambrose, who has many condo association clients. “I had reached out to Kathy before and let her know that I would be in touch with her after the storm.”

A storm that size, that effectively covered the entire state, every office from Coral Gables to Tallahassee was affected.
Chris Gardner, president, Hub Florida

Ambrose says there was no power but they communicated via cell phone. (All of her association clients have her cell number.) The storm hit in mid-afternoon and lasted several hours, closing some streets, Ambrose says. “She was sending me pictures and calling me. We’ve had a relationship for five years. I don’t mind going the extra mile.

“I reached out to her as I did with all my associations. I walked her through the process—what the association’s responsibilities are, what the owners’ are. I explained to her to mitigate the damages. Do everything you can to prevent that damage from getting worse.

“As an insurance agent, this is what I am trained for. Having the support of Brown & Brown and the head of the southwest Florida office, Jason Cloar, made it easy to get out and start helping clients faster. It freed me up and allowed me to get out into the field and assist people in need, which is where I was really needed.”

Insurance professionals, especially those in storm-prone areas like Florida, often take painstaking efforts to ensure they are ready to respond to an emergency. But even those plans don’t always go according to script. The sheer size of Irma, for example, was a differentiator.

“We have eight offices in Florida, and virtually all were affected,” says Chris Gardner, president of Hub Florida. “Normally, we’re relying on other offices in the state in the case of a catastrophe. In this case, it wasn’t really an option…. A storm that size, that effectively covered the entire state, every office from Coral Gables to Tallahassee was affected.”

But longer-term strategic thinking meant that Hub Florida had backup for its backup. The company’s hurricane crisis resource center in Chicago was there to help deal with the situation. Hub’s Risk Services Division worked with corporate communications to launch a preparedness and claims information support process out of the center for Hurricane Irma (as well as for Hurricanes Maria and Harvey). A national operations team, led by Todd Macumber, president and CEO of Hub’s Risk Services Division, mobilized to deliver daily storm-tracking analyses, preparedness and recovery resources, office closures, contact information, and claims resources and information.

This response, begun before the storm hit, carried on throughout the storm and for days after. The team used email and social media to ensure clients were fully aware of office openings and closings, claims resources, and information and support they would need.

“We began preparation calls with Risk Services. We were going through rehearsal and contingency plans four days out,” Gardner says. “Our troops on the ground were prepared to cope with the storm. Our team in Chicago did a great job.”

Brown & Brown of Southwest Florida was able to power up both its Naples and Fort Myers offices the day after the storm, though working slimly. “Those who could return to work did,” says Cloar. The company began proactively filing claims and sending agents out to properties as soon as clients could be reached. “Leading up to this event, there was a lot of anxiety,” Cloar says. “We wanted to make sure we were prepared as an organization.”

Every storm leaves in its wake a litany of questions, and these can become complicated because policies differ. Cloar cites the many questions about deductibles. Hurricane deductibles are a percentage of the total insured value, he notes. Answering such questions involves reminding people of what their percentage is, how deductibles ultimately work and how they might apply in their circumstances.

Another policy issue Irma raised was coverage for losses stemming from the actions of civil authorities, such as evacuation orders, says Natalie Dominguez, assistant vice president and claims manager at AmWINS Brokerage of Georgia, who handled Irma claims. “Does it take damage to trigger that coverage? Every policy is different, so you really can’t give a blanket answer.”

There are also questions about process. “We emphasize to people that they have the right to make the necessary repairs to their property to preserve the property prior to an adjuster showing up,” Cloar says. In addition, they have to take steps to document the damages, such as taking pictures of the damaged areas.

Cloar says Brown & Brown representatives have also attended condo association board meetings to answer questions about association responsibility versus unit owner responsibilities and have gone into the field with adjusters. Although southwestern Florida did not sustain the catastrophic damage suffered in parts of the Florida Keys, the storm ripped off roofs, flooded the ground floors of some buildings and caused power outages.

The Tally So Far

As far as actual claims go, Gardner says intake has been surprisingly low for what it could have been. “We’re probably about 35% to 40% of what had been expected,” he says. “Folks are really focused on business-interruption claims and off-premises power interruption.” He says they also have questions about flood sublimits and windstorm deductibles.

Leading up to this event, there was a lot of anxiety. We wanted to make sure we were prepared as an organization.
Jason Cloar, EVP, Brown & Brown of Southwest Florida

Hurricane Maria, which devastated Puerto Rico as well as other smaller Caribbean islands, will only swell that total.

But despite the destructiveness of Harvey, Irma and Maria, 2017 doesn’t appear likely to overtake 2005 as the costliest in terms of insured property damage. That year saw three of the 10 costliest hurricanes in history. In fact, the most destructive—Hurricane Katrina—caused an estimated $49.79 billion in insured damage in 2016 dollars. Hurricane Wilma, sixth on the list, caused an estimated $12.48 billion in 2016 dollars while Hurricane Rita, ninth on the list, caused an estimated $6.82 billion. That, of course, could all change when the insured damages of Hurricane Maria, which plunged Puerto Rico into a darkness that could last months, are tallied. Estimates of Maria’s damages are only beginning to emerge, but a preliminary projection from AIR puts them as high as $80 billion.

Speaking in late September, before damages from Hurricane Maria were tallied, Eric Uhlhorn, principal scientist at AIR, said the numbers still lag behind 2005 figures. But at the same time that year, Uhlhorn said, “we were dealing with Hurricane Rita, an ‘R’ storm, and we’re just on the ‘N’ storm right now. The indications are that the activity in terms of hurricane development should remain elevated into the second half of the season. Things should start tailing off, but by no means are we done yet.”