Trillion-Dollar Trend or a Monetary Moment?

Decentralized, digital and disruptive, cryptocurrency takes its place on the world stage.
By Zach Ewell Posted on June 1, 2021 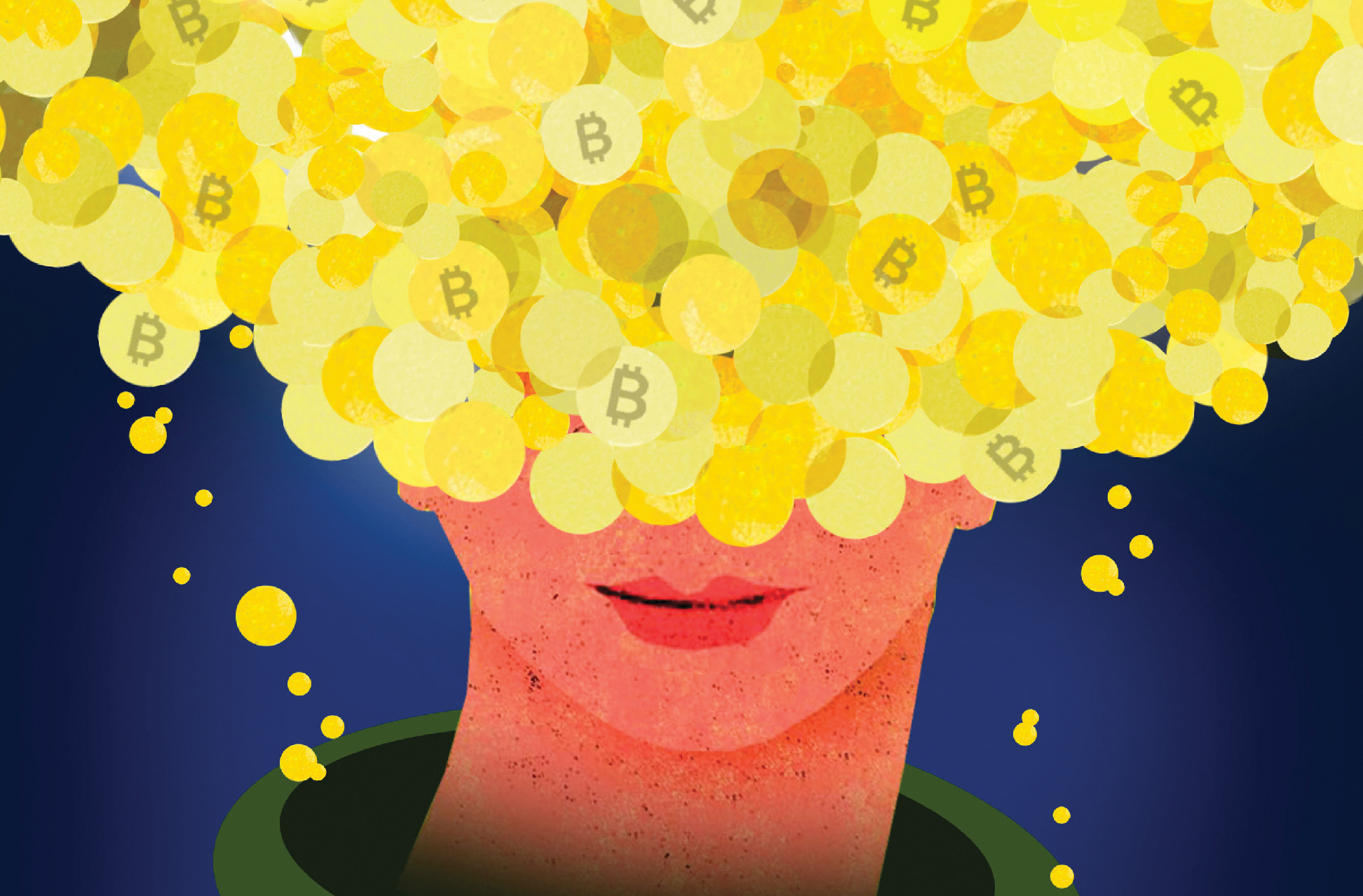 Cryptocurrencies have been gaining momentum for the past decade and are now taking the digital world by storm. Ethereum, Litecoin, XRP and the most popular, Bitcoin, are just a handful of the thousands of digital currencies that are being used to buy and sell goods—legally and illegally—as alternatives to cash and credit cards.

What started out as a hobby for those who were skeptical of government and financial institution oversight has blossomed into a trillion-dollar market, with many companies around the world working to integrate cryptocurrencies into their business models to keep pace with consumer behavior.

Cryptocurrency is becoming more mainstream for companies and markets to utilize, but there are untold risks to business models and the environment.

Public acceptance and adoption of cryptocurrency will take time, and the risks to businesses will continue to evolve.

Cryptocurrencies have created wealth for some and litigation for others.

As the COVID-19 pandemic wreaked havoc on the global economy, the popularity and value of cryptocurrency skyrocketed. It is estimated that the top 20 cryptocurrencies make up nearly 99% of the total market. More people than ever are using digital wallets and forms of payment and investing in different options.

Tesla and its high-profile CEO, Elon Musk, made headlines when it announced in February it had bought $1.5 billion worth of “digital assets” as an investment, hinting at additional investments in cryptocurrency more broadly in the future. The electric car manufacturer also said at the time it would soon begin to accept bitcoins as payment for its products. That day, the price of bitcoins surged from $39,000 to $46,000 per unit. Just over a week later, the price of one bitcoin nearly exceeded $58,000. In its April earnings call, Tesla revealed that it sold 10% of its Bitcoin holdings, generating $101 million in income from the sale, according to its first-quarter report. The move, Musk wrote on Twitter, was “to prove liquidity of Bitcoin as an alternative to holding cash on [a] balance sheet.”

Editor’s note: After this story went to print, Tesla suspended vehicle purchases using Bitcoin and said it would only use cryptocurrency when the mining of it proves more sustainable. According to a May 12 announcement Musk made on Twitter, “We are concerned about rapidly increasing use of fossil fuels for Bitcoin mining and transactions, especially coal, which has the worst emissions of any fuel. Cryptocurrency is a good idea on many levels and we believe it has a promising future, but this cannot come at great cost to the environment.” Musk says Tesla will look at other cryptocurrencies that use <1% of Bitcoin’s energy/transaction. See our sidebar below, Bitcoin Emissions Prove Costly.

Bitcoin reached a peak of almost $65,000 per unit in mid-April and is up sevenfold in the past year, according to market analysts.

Other major retailers, including Crate and Barrel, Nordstrom, Coca-Cola, and Amazon-owned Whole Foods, began experimenting with cryptocurrencies in 2019, accepting bitcoins and other types of digital money from consumers through digital wallet apps. Customers simply hold their phone app up to a scanner to pay.

The first decentralized digital currency, known as Bitcoin, and the blockchain database in which it operates were developed after the financial crisis of 2008 by the presumed pseudonymous person or persons known as Satoshi Nakamoto. Nakamoto’s stated purpose in creating Bitcoin was to send digital currency between only two parties (i.e., “decentralized”), from sender to receiver on a peer-to-peer network without a central bank or third-party administrator monitoring the activity. Transactions are verified by network “nodes” and recorded in a public distributed ledger called a blockchain.

As regulations come down from the U.S. regulators as well as those abroad, they help provide some clarity or a framework within which companies need to operate, and that is something that the markets are looking for.
Jason Kyd, Divisional VP, Fidelity/Crime Specie, Great American

Supporters of cryptocurrencies say they make commerce practical and more efficient, with almost impenetrable security and unlimited storage. And while many companies today are recognizing and accepting payments through cryptocurrency, detractors warn of its susceptibility to criminals. Because transactions are conducted on the internet, skeptics say, hackers remain a threat, malware is ever-present, and bitcoins are very much liable to theft.

“Underwriting Bitcoin is really no different at the outset than underwriting a cyber risk,” says Tim Fletcher, managing director of Aon’s financial services group. “Because if you’re able to hack into it in a company, get through their security protocols, their cyber-secure protocols, then you can get in and steal things. You can steal data, you can steal Social Security numbers, healthcare information. You can steal assets. A bank stores money. So, if you were to hack into a company that’s storing cryptocurrency, you can steal what they store.”

After hackers steal login information, Fletcher says, they can transfer cryptocurrency into another account. “Where is the cryptocurrency being stored? That’s the number-one question,” Fletcher says. Using Tesla as an example of the risk involved in bitcoin transactions, Fletcher says, “They’re going to allow payments. Is it their platform? Are they storing it? Or are they using a third-party platform? I don’t know. That’s where insurers get blinded by it.”

Rachel Jenkins agrees. A customer success manager and executive vice president of Founder Shield, an insurance brokerage that provides coverage for cryptocurrency businesses and mining facilities, Jenkins warns businesses of threshold coverage considerations. “If the company is looking to just accept cryptocurrency, a simple update to add cryptocurrency as a covered money with fair market value under cyber or crime may be the only fix needed,” Jenkins says. “If the company is looking to operate in the industry, there may have to be an overhaul of all the coverages, particularly D&O, E&O, cyber and crime, as carriers have very limited appetite when it comes to cryptocurrency. A lot of D&O carriers no longer offer Side C coverage [which covers the entity’s own defense and indemnity costs] for crypto-related companies.”

According to Jenkins, carriers have a very limited appetite for covering cryptocurrency businesses due to their industry’s short history, high loss volatility and unregulated market. A policy overhaul would likely take place if a company were to switch its industry to cryptocurrency-based commerce as a whole. “It’s a material change in risk, which has to be communicated to the carrier,” Jenkins says. “It’s one thing to just accept cryptocurrency as a method of payment. But it’s a completely different ballgame to say that you’re going to operate as an exchange” (a cryptocurrency trading platform) “or as a wallet” (a secure company or service that holds digital money).

D&O is one of the most prominent risks associated with cryptocurrency, according to Kevin Guillet, U.S. crime product leader within Marsh’s financial and professional liability practice. “Consequently,” Guillet says, “the most common coverages that we see being purchased by cryptocurrency trading platforms include D&O coverage and crime or specie coverage.”

When it comes to housing cryptocurrency, there are several types of storage, typically known as hot, warm or cold. “Hot storage is deemed to be on a single-point device that is connected to the internet,” says Jason Kyd, divisional vice president for fidelity/crime specie at Great American Insurance Group. “It could be a digital wallet such as a Trezor,” Kyd says, referring to an advanced cryptocurrency hardware wallet that stores bitcoins, passwords, tokens and other keys, “or a computer. Warm storage is where the passcode is spread over two or three devices or companies. This could be a USB, Trezor or an exchange.”

Kyd says because a password is dependent upon multiple devices or companies, warm storage is safer than hot storage but more accessible than cold storage. Cold storage refers to storing cryptocurrency offline and spending without the private keys controlling them ever being online, such as offline wallets, Coldcard, or an air-gapped computer. These methods resist theft by hackers and malware. According to Frank Scheckton, divisional president of fidelity/crime at Great American, cold storage is often a necessary security precaution, especially dealing with large amounts of bitcoin.

The premiums for crime policies differ drastically depending on which storage types are used. “The riskiest is certainly the hot storage,” Fletcher says, “because that’s the currency stored online and it is most vulnerable to a potential hacking event. Whereas cold storage is much more secure and viewed as such by the insurance market. You’d have to have a very, very rare, sophisticated event in order to have a cold storage loss versus hot storage.”

For traditional financial banks, the laws have been around since the 1920s, 1930s. There’s a track record, whether it be banks, financial institutions, broker-dealers. That regulatory certainty gives them comfort when they’re underwriting. And the regulatory uncertainty when underwriting a digital asset gives them a bit of pause.
Tim Fletcher, Managing Director, Financial Services Group, Aon

Ethereum, the second-most-traded cryptocurrency, whose blockchain network was designed to be more secure than Bitcoin’s, has been vulnerable to hacking in the past. “It’s still a super-early technology and Ethereum adoption is still nowhere near where Bitcoin is, so it’s very hard to compare the exposure and risk in an apples-to-apples way,” Jenkins says. “With that being said, Ethereum has had its own issues, after a hacker exploited a vulnerability running on Ethereum’s software, getting $50 million worth of ether.”

The Need for Regulatory Certainty

A decade since the inception of decentralized cryptocurrency, enthusiasts and investors now trade it in the global market to the very same institutions that it was created to bypass. Bitcoin’s blockchain technology has changed multiple industries around the world and has even started to influence innovations by central banks. China, the European Union and the United States have all started to experiment with how their currencies could be converted into digital form.

According to CNBC, advocates of traditional cash being converted to digital currency say it could make cross-border money payments easier, promote financial inclusion and add to payment system stability. But the unregulated market is a challenge. According to Kyd, it’s not a question of what type of regulation is needed for insurers to become more confident in underwriting companies who utilize cryptocurrency but, rather, more regulatory certainty in general. “As regulations come down from the U.S. regulators as well as those abroad, they help provide some clarity or a framework within which companies need to operate, and that is something that the markets are looking for,” Kyd said.

Regulation has its advantages and drawbacks for those who use cryptocurrency. “If you apply some of the anti-money-laundering rules and regulations to Bitcoin, it may make it tougher to steal,” Scheckton says. But expanded regulation could also make bitcoins less attractive, he says, given that some prefer its unregulated autonomy.

As more regulation continues to outline the global cryptocurrency market, Fletcher says, the insurance industry could gain more comfort with the risk. In the United States, for example, Bitcoin is classified as an asset rather than a recognized currency. Despite its widening use, cryptocurrency remains a new financial concept that doesn’t have decades of trial and error to guide its use. “For traditional financial banks, the laws have been around since the 1920s, 1930s,” Fletcher says. “There’s a track record, whether it be banks, financial institutions, broker-dealers. That regulatory certainty gives them comfort when they’re underwriting. And the regulatory uncertainty when underwriting a digital asset gives them a bit of pause.”