I learned more from that than from any classroom. I learned about motivating people, building a budget and running a small business.
By Chris Hann Posted on October 27, 2014 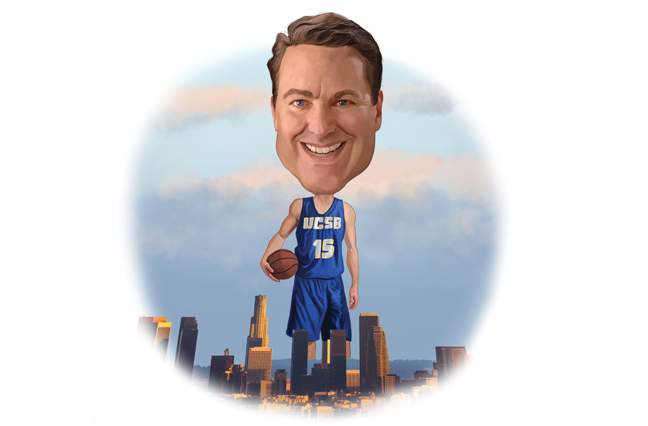 Q
First of all, congratulations on becoming The Council’s new chairman. What do you foresee as The Council’s priorities for the coming year?
A
It’s advocacy and making sure the decisions that are made in Washington and other parts of the country are not adverse to our business and the clients we serve. It’s providing education, information and creative ways to connect people and support each other. How do we do more of the same and do it better?

You’re a California native. Where did you grow up?
In a small, beautiful yet boring town, La Cañada Flintridge, adjacent to Pasadena and 10 minutes from downtown L.A. It’s the kind of town where, when you’re growing up, you’re trying to get the heck out of there. Then you spend the rest of your life trying to afford to go back.

And you played basketball at the University of California at Santa Barbara?
For a very short time. I played in high school. I got a scholarship to go play at UC Santa Barbara. I realized quickly there was no NBA in my future. I also realized I was in Santa Barbara, and I didn’t want to be in a gym five hours a day.

And you ended up president of your fraternity.
I always tell people I learned more from that than from any classroom. I learned about motivating people, building a budget and running a small business. Really it was probably the best experience I ended up getting out of college.

So what’s it like to be 6 feet, 10 inches tall?
Well, I very rarely see people at eye level. My dad is 6-foot-8. He said early on, “People are going to ask you a lot, How tall are you? You have to understand, it’s a compliment. People don’t ask short people how short they are.” I look at it as a huge advantage.

Tell me about Bolton.
When I joined in 1990, we had eight to ten million in annual revenue and probably about five or six producers. Today we’re about $30 million and have about 30 producers. One thing about the company I liked then and like now, it’s big enough that we have all the services, support and the carriers we need to compete with the biggest brokers, yet we’re a very flat organization. We’re small enough and nimble enough not to have to deal in a big bureaucracy.

Bolton is based in Pasadena. Do you have a favorite Pasadena restaurant?
The Old Town area probably has 50+ good restaurants. The Parkway Grill, in terms of food and service and ambiance, is California with flair. It’s a French bistro with California influence. They grow most of their own vegetables right there behind the restaurant.

You’re also a fan of downtown L.A.
The energy around downtown L.A. has come back. It’s amazing how many people are moving in. We also spend a lot of time going to concerts at the Hollywood Bowl or the Greek Theater. And I get to close to 10 Dodger games a year. My first date with my wife was at Dodger Stadium. That probably tells you something.

Did they win?
You know what? I have no idea. I was not paying attention to the game that night.

Who has been your most influential business mentor?
John Boyle. He’s just a fabulous man, a great insurance guy but also probably one of the nicest, most ethical people I’ve met. I worked closely with him for about seven years before he retired. It was an invaluable opportunity.

How would the people you work with describe your management style?
Definitely collaborative. I am not a dictatorial-type ruler. I don’t have much of an ego. It’s about the team.

Are there lessons you learned as an athlete that you apply in the business world?
It’s just that there’s nothing you can’t accomplish. It’s the hard work. You don’t just show up and you’re good at something. You’ve got to put in the effort.

What have you learned that you pass on to others?
One thing I’ve always been able to do, when the situation gets tougher and more intense, I tend to get calmer. I can help people say, “Let’s sit back and look at this in a different way.” There’s nothing in our business that’s necessarily a split-second decision like firemen or policemen have to deal with. We have the time to be thoughtful and make sure that we get it right.

Last question: What gives you your leader’s edge in this industry?
This is a people business. No matter how smart you are or aren’t, or how hard you work or don’t, you have to have relationships. At the end of the day, it’s how you treat others. Do people want to do business with you and trust you?