Stay and Do > African Safaris

Four options for the adventurer-in-waiting
By Carrie Williamson Posted on July 12, 2019 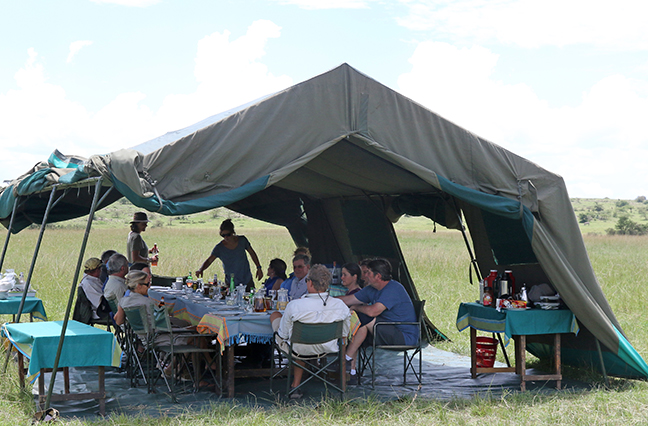 Founders Mel Fox, who was raised in East Africa, and her husband, Bayard, guided their first riding safari in the Masai Mara in 1979, taking guests from their Wyoming ranch. Equitours now operates in eight countries in Africa.
>> If you are an experienced rider, there really is no better safari you can take. Interacting with wild game and local tribesmen by horseback connects you to nature and the people in a way a vehicle cannot.
>> The mobile tented camps are far from the masses, offering the quintessential African safari experience. equitours.com

Wilderness Safaris operates in six countries in Africa but established its reputation in Botswana, where it has 21 eco-lodges.
>> From the windswept plains of the Kalahari to the marshes of Linyanti and the floodplains of the Okavango Delta, all of the camps are located in private concessions, so the game viewing experience is more intimate and there is less impact on the land and animals.
>> The newest camp, Qorokwe, overlooks a lagoon and is located on private land, so you can go off-road and do night drives.
>> Its flagship Mombo camp recently reopened in Moremi Game Reserve. Each tent has a bar cart, private plunge pool and views of the elephants, baboons and giraffes grazing on the savannah. wilderness-safaris.com

Nomad Tanzania, which started out with three private camps in remote corners of the north, west and south, now has 14.
>> The northern camps are home base for exploring Serengeti and Tarangire National Parks, sites of the greatest concentration of wild animals on the planet, and the iconic Ngorongoro Crater. Western camps offer a chance to see the chimps of the Mahale Mountains and the big game of Katavi National Park, one of the wildest places in Africa. Southern camps are great for bush walks, boating and sleeping under the stars in Selous Game Reserve and Ruaha National Park.
>> Camps vary—some have family tents, some have rooms open to private plunge pools, some have en-suite bathrooms, some have bucket showers and flush toilets. But each one, such as Greystoke Mahale, which is situated on a sandy beach with views of the hippos and chimpanzees, offers a sense of place. nomad-tanzania.com

If you are short on time and want to pair a wilderness safari with your wine-tasting tour, head to South Africa’s Greater Kruger National Park, where you are almost guaranteed to see the Big Five if you have just a few days.
>> To escape Kruger’s mass of tourists, make your home base at Tanda Tula Safari Camp in the Timbavati Private Nature Reserve, the first East African-styled luxury tented safari camp in South Africa.
>> On the banks of the Nhlaralumi River, Tanda Tula operates 12 secluded luxury tents, each with an en-suite bathroom, Victorian bathtub, outdoor shower, and deck overlooking the African bush. tandatula.com