Community health is a pretty important topic, the whole issue of health inequity.
By Chris Hann Posted on July 18, 2018 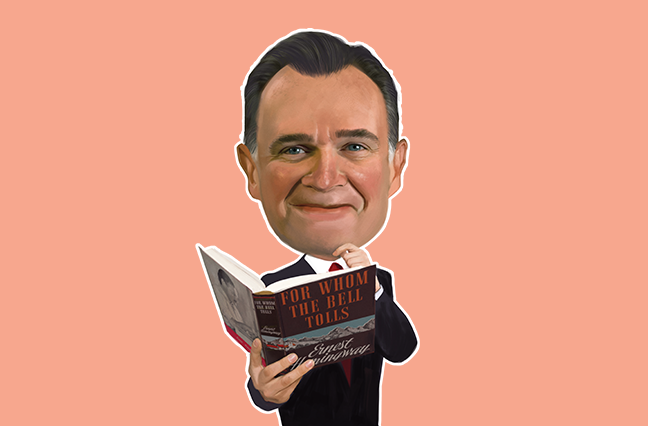 Q
You recently became chair of the CIAB’s Council of Employee Benefits Executives advisory committee. What has been the biggest benefit you’ve taken away from your time on CEBE?
A
Some of the smartest people in the industry make up the CEBE advisory committee. I’ve always been impressed with the depth of knowledge and the understanding of their clients and the market. That’s pretty important to have at a time of change and disruption.

You’ve lived near Chicago your whole life. Where did you grow up?
I was born in the hospital where Ernest Hemingway was born, in Oak Park, Illinois. Right now I’m re-reading For Whom the Bell Tolls. My father’s parents were the first generation of our family from Ireland. They worked on the canal that was part of the project to reverse the direction of the Chicago River. It used to flow into Lake Michigan. Now it flows from Lake Michigan.

OK, let’s get this out of the way—Cubs or White Sox?
I’m a huge Cubs fan and Blackhawks fan. One of my sons is a White Sox fan, like my father was.

How did that happen?
My younger son took to the relationship he had with my dad and just followed suit. Sometimes I mention that I dropped him on his head as a small child.

I guess that would explain it.
My father served in World War II. I have a letter he sent home to his parents while he was in France. The note starts: “Dear Mom and Dad, I’m doing ok. I understand the White Sox beat the Yankees in a doubleheader.”

As a Yankees fan, I can appreciate that.
I think my son was well into his teenage years before he realized Damn Yankees was actually two words.

Who have been your most influential mentors?
My father, Patrick. He came back from World War II and went to school on the GI Bill. He became legally blind in his late 30s from a rare eye disease, yet he worked and supported our family through various jobs. He found a way to hit fly balls to me based on feel. I’d say he’s probably my biggest influence. I also had a great debate coach in college, Dr. Jack Parker. I went to school on a scholarship for intercollegiate debate. I think many things—how I execute in business, how I drive processes in business—really can go back to Dr. Parker, who was just a really strong influence in my time in school.

I didn’t know there was such a thing as a scholarship for debating.
I went to a boarding school in Wisconsin. We took a class called Extemporaneous Speech. They give you a topic, and 15 or 20 minutes later you give a speech. My Irish gift of gab probably helped.

Have you used those debating skills in your business life?
I’d say the most significant thing is having a critical-thinking focus. You would walk through arguments from start to finish, and the most important work in business has involved step-by-step logical thinking. It also helps you build passion in others around the vision you have.

You’re the immediate past chair of Community Health Charities. Why have you been so committed to that group?
“Some element of my career from the start has involved healthcare, so it was a group I had an affinity for. They organize worksite giving campaigns for health charities, with both the federal government and private employers. Community health is a pretty important topic, the whole issue of heath inequity. Your zip code might be more of a determining factor of your health status than your genetic code.

How would your co-workers describe your management style?
Strategic. Collaborative. Process-oriented. Outcomes-driven.

If you could change one thing about the insurance industry, what would it be?
To be able to reach more people more fully. Folks like myself, who have been in the business for more than 30 years, have been providing coverage, advising retirement, etc. Yet some people still don’t have adequate coverage and are not prepared for retirement. There is more we can do.

Last question: What gives you your leader’s edge?
Demonstrating an obvious passion for my vision and relying on and supporting my team.

Favorite vacation spot: The Southwest (“Anywhere in the desert.”)

All-time favorite Cub: Don Kessinger. (“I was a shortstop as a kid.”)

Favorite place to watch a game at Wrigley Field: “There’s nothing better than a hot day in the bleachers.”

Favorite Hemingway book: For Whom the Bell Tolls

Favorite musician: Stone Temple Pilots (“But I enjoy any concert I can attend with my sons. Music has been and is a great point of connection for us ever since they were very young.”)