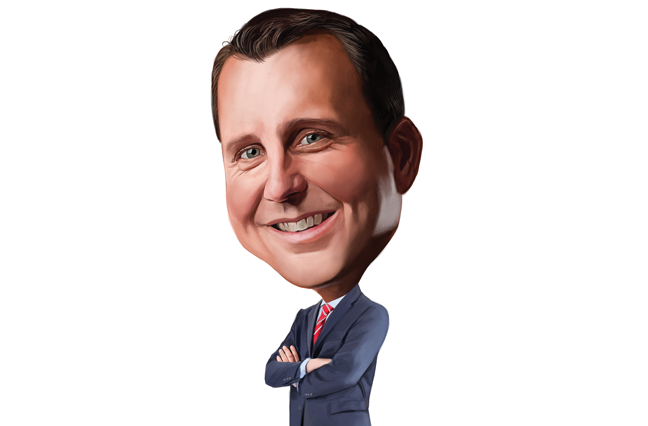 Q
What was it like growing up in Princeton, Indiana?
A
I like to tell people I went to school in Princeton, hoping they don’t ask the follow-up question. It’s a small town, a farm town. It’s industrial to a certain degree. Coal mines. It was a great place to grow up. My dad was the local high school football coach.

Did you play football for your dad?
I played one year, as a freshman. Then he went to coach at a school in Illinois, only 12 miles away.

How come he moved to another school?
Part of it was politics. It was time for him to move on. Part of it was our relationship, quite frankly. I was a quarterback. It took the pressure off the father-son relationship. In retrospect, I would have loved to play for him, but it was a blessing in disguise. You kind of have to make your own mark.

Who were your childhood heroes?
My grandfather, Noel Loftin, my dad’s dad. He was a five-sport athlete at Tulane. He played in the first Sugar Bowl in 1935. They beat Temple. The opposing coach was a guy by the name of Pop Warner. But that’s not why he’s my hero. He was a very decorated World War II veteran who retired from the Marine Corps as a colonel. He was married to my grandmother, Jeanne, for 61 years. They held hands everywhere they went. He fathered eight kids, and he was one of the kindest human beings to ever walk the planet.

What do you like to do when you’re not working?
I know you’re going to find this hard to believe, but sports is at the center of our lives. Both our daughters play competitive soccer.

You studied mathematics at Indiana University. Why math?
I initially was going to study physical therapy. I decided I didn’t want to do that. Math was something I liked and was good at. I passed the first two actuarial exams, but then I decided I was more of a people person than I thought I was.

What’s kept you in the business for 22 years?
The discovery of the entrepreneurial side of the business. It gives me a chance to deploy strategy every day.

Tell me a little about your business.
We have about 140 people. We were started in 1964 by Michael Bill when he was 27. He took a risk and built something. His fingerprints are all over this place.

You’re the highest-ranking person at MJ who is not in the Bill family. I would imagine that can get tricky.
I’m trying to figure out how to get into that family tree, but so far it’s not working out. It’s a tribute to the Bill family. They’re extraordinary people. They treat me like family. You would think family dynamics would get in the way, but they don’t. They want to put the right people in the right seats with the right skill sets.

Who was your most influential business mentor?
Michael Bill. We recently celebrated a 40-year employee who said he got his PhD in insurance after 4:30 every night by sitting down with Michael. I feel the same way. He has been extraordinarily influential to me.

What is the best advice you ever got?
That talent does not necessarily correlate to success. My dad always said that. He used to say attitude and work ethic are what you choose. Your talent for the most part is God-given.

How would your co-workers describe your management style?
Passionate. I think that would be the first thing they’d say. I hope the second thing would be open and fun. And I don’t take myself too seriously.

What is something your co-workers would be surprised to learn about you?
Nothing. I’m wide open, maybe sometimes to a fault.

If you could change one thing about the insurance industry, what would it be?
The negative stereotype that it has—both from the consumer and from young folks looking at this industry as a potential employer.

What gives you your leader’s edge?
I’m not a me-centric leader. That’s what gives MJ our edge. It’s 140 brains and 280 hands. I’m not one who thinks he knows everything. My drive and my curiosity—just a lifelong commitment to learning—have continued to bode well for me personally and for the firm.