A Grand Setting Meets a Good Time in Miami Beach

If Miami Beach is on your bucket list, be sure to soak in these Morris Lapidus landmarks.
By Carrie Williamson Posted on March 30, 2020 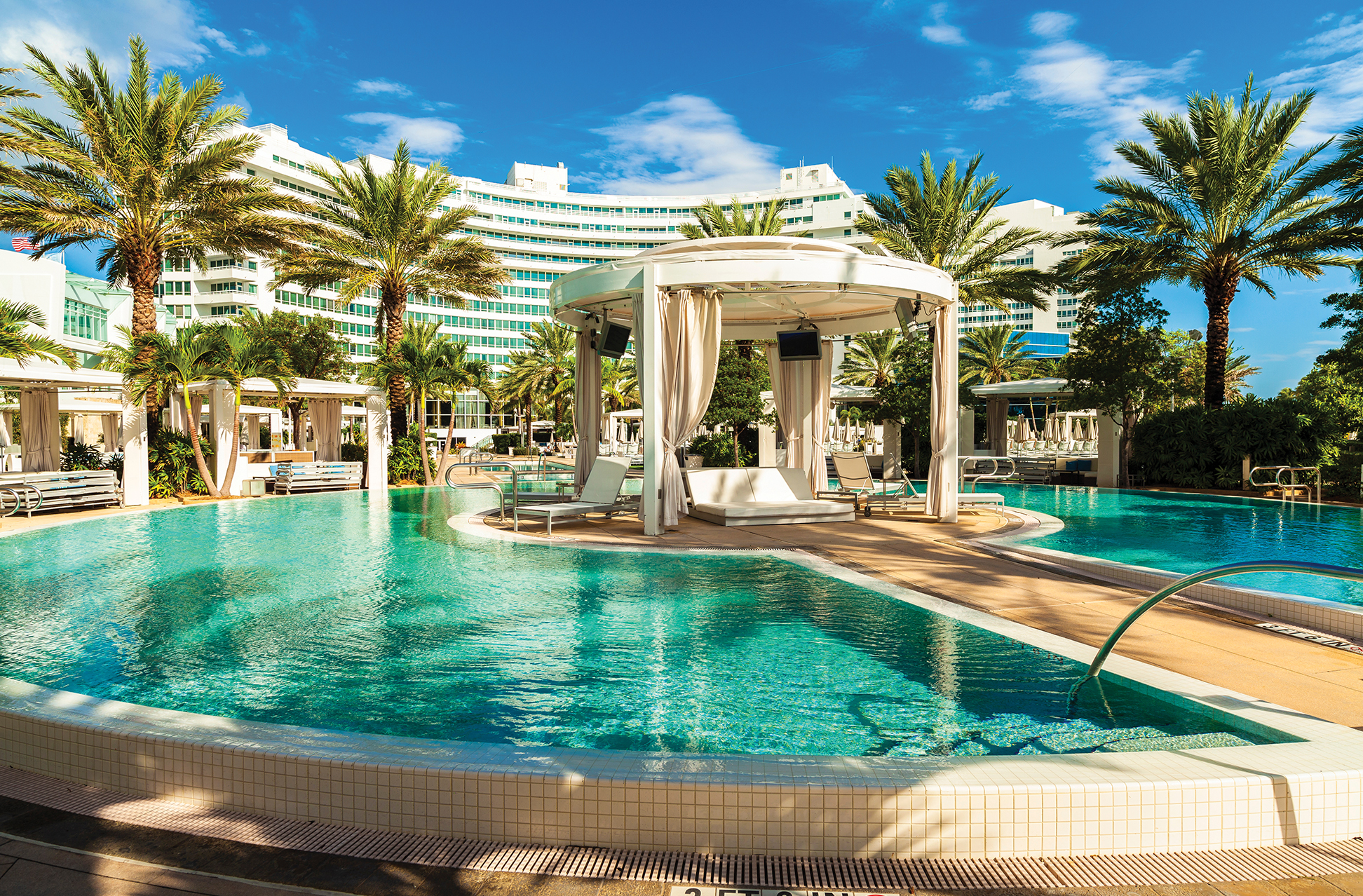 “If you create the stage setting and it is grand, everyone who enters will play their part.” — Morris Lapidus, architect

During a career that spanned more than five decades, architect Morris Lapidus designed more than 1,000 buildings. But it was his hundreds of hotels around the world that made him famous, most notably the five neo-baroque Miami Modern hotels constructed in the 1950s and ’60s. His use of curves, sweeping lines and fanciful elements leant glamour to his Miami Beach resorts, especially the Fontainebleau. Hollywood movies were the inspiration for its interiors—French antiques refinished in white and gold, statues posed on rosewood planters, brass chandeliers and candelabras—and Hollywood celebrities flocked there to play their part. Frank Sinatra and fellow Rat Packers were among the glitterati who stayed at the glitzy Fontainebleau. Scenes from the James Bond movie Goldfinger were even shot at the hotel.

Despite Lapidus’s commercial success, critics referred to his theatrical aesthetic as “gaudy kitsch,” anathema to the clean lines and minimalist sensibilities of the mid-century modern movement of the time. Lapidus had the last laugh. In 2000, the Cooper Hewitt, Smithsonian Design Museum honored him as an American Original for his lifetime of work.

As Lapidus said about his approach, “My whole success is I’ve always been designing for people, first because I wanted to sell them merchandise. Then when I got into hotels, I had to rethink, what am I selling now? You’re selling a good time.” Hoteliers have spent millions renovating his iconic resorts, which have been integral in Miami Beach’s renaissance and evolution. They are among the top places to stay not only because of his joyous architecture but also for the good time to be had. Lady Gaga and Cuba Gooding Jr. are among the stars that have partied at the LIV nightclub at the Fontainebleau. Next door, the swanky Eden Roc Miami Beach is a more laid-back choice for business travelers. In South Beach, the daybed pool scene and steamer trunk mini-bar at the Nautilus by Arlo is a favorite for those seeking a hip boutique beach hotel experience.

The big news is that The Ritz-Carlton South Beach, a Lapidus landmark since 1953, has reopened after a $90 million dollar renovation. Closed for two and a half years after Hurricane Irma, the art deco and Miami Modern architectural bones remain, including the back-lit “bubble wall” and original 1950s black terrazzo floor in the lobby. But nearly everything else—the public spaces, guest rooms, restaurants and spa—has a fresh-as-a-sea-breeze modern look inspired by the beachfront setting. Perfectly positioned at the intersection of Collins Avenue and Lincoln Road (another Lapidus design), this luxury resort is poised to reestablish itself as the place to stay for people who want to be in the beating heart of the South Beach shopping, dining and party scene.