To Function or Not to Function?

The Council’s government affairs team has a full plate on Capitol Hill in 2020.
By Joel Wood, Joel Kopperud, Blaire Bartlett Posted on January 21, 2020 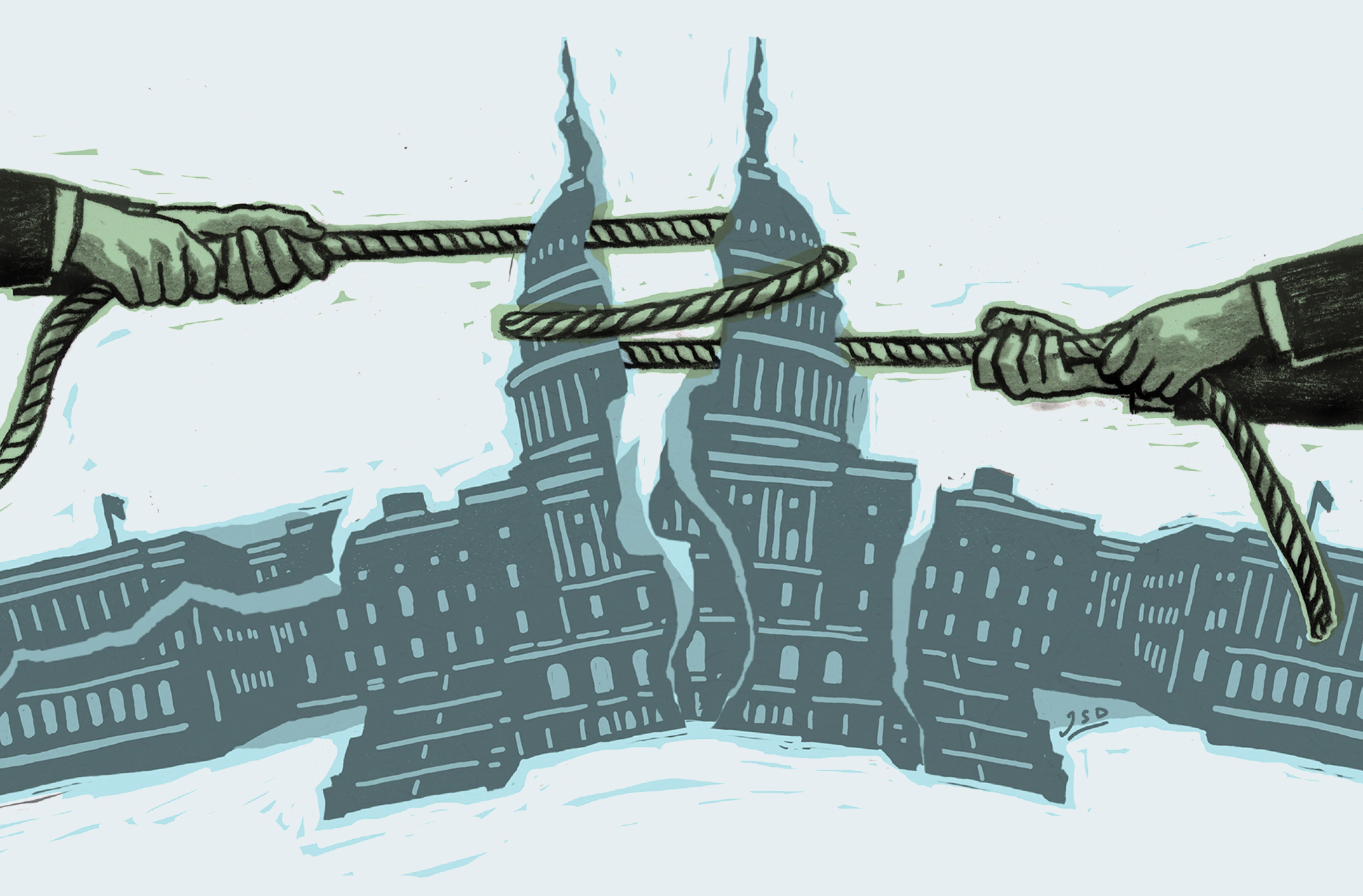 It takes a special kind of human to willingly (and enjoyably) walk the halls of Congress and attempt to get your message heard (which is, for the record, different than walking the halls of Congress and attempting to figure out what in the world is going on). In an embarrassment of riches, The Council has three such humans—Joel Wood, Joel Kopperud and Blaire Bartlett. In their now annual year-end “happy holidays to you, too” email debate, we bring you their individual assessments of 2019, their insights into what’s ahead, and a few friendly jabs along the way. —Editor

Wow. Here we are in 2020, and we had a really great year last year! TRIA reauthorization for seven years, Ex/Im with strong reinsurance provisions, NFIP reauthorization, and evening repeal of the Cadillac tax! I had dinner with Chuck Schumer in November and he said point blank that the Cadillac tax repeal would have to ride alongside repealing the Health Insurance Tax and the Medical Device Tax repeal—and he interestingly wondered aloud whether there were any real debt hawks left in the Senate, as they’d be our biggest threats. Frankly, I don’t care—we got it done!!! Looks like Congress CAN walk and chew gum at the same time.

Council members will face threats and opportunities in 2020, regardless of election results.

Public option health coverage and ACA stabilization will be highlighted in the next Congress.

Ha! It’s like the stars aligned and all the pigs were ready to fly.

However, just because we got the Christmas gift to end all Christmas gifts (I’m sure there’s a plot to a great Hallmark movie there), the work never ends—and just in time for our Legislative Summit too. I hope our member firms don’t think they can get out of coming to D.C. this February. Next to Christmas, it’s my favorite time of year! Lining up members of Congress to speak, having all of The Council’s working groups in one place, and letting our members loose on Capitol Hill—I love it!

You’re right, Joel, we got a lot done in that end-of-year funding bill, but there are issues we can still lobby on…and not just flood. I’m thinking we change it up and lobby on cannabis in the insurance industry. We’re so close on that one!

Here we are just after the holidays, having secured multiple legislative wins, and you two are so cynical. Joel K doesn’t give a flip about debt and fiscal sanity, and you, Blaire, congratulate our congressional allies with the analogy of them being pigs that flew. You can forgive our broker readers for thinking that we are classic swamp dwellers.

We have plenty on the plate, still, in threats and opportunities to our member firms in the coming months and post-2020 election, whatever the results.

But let me not yet leave the accomplishments achieved in the year-end budget deal. I’ve always noted that we’re not a parliamentary democracy—that the way Madison constructed things, it’s always much more difficult to pass something than to beat something. So rolling all of this into one package does look like a hat trick. But I will cite a voicemail we received from Council officer Bob Klonk, the irrepressible CEO of Oswald in Cleveland. “You gotta remind people that this stuff doesn’t just happen,” he said. “We spend a lot of money on you guys and engaging in the political process, and people need to know it matters.”

So I begin the new year with gratitude for working for the most devoted and generous and most successful brokerage executives on earth.

And before we get too full of ourselves, Klonk continued: “Guys, I don’t get a hug for doing my job. Get back to work.”

Yeah, Joel, I’m with you. It feels a little gluttonous—like we’re drunk and fat. I could start on my tirade of corporate taxes now at an average of 11% while we top trillion-dollar deficits and blow up the size of the military, border wall, and federal spending…but since we got so much in this bill, I can’t really get too crazy. It is impressive, though, how both the freedom caucus and blue dogs stood down to allow their parties to claim a “win” in this environment.

Ironically, surprise medical billing didn’t make it in! Not because of lack of momentum…I’m of the position that it didn’t make it in the package because of the “bad form” of the deal announced between the Senate and House health committees. They tried to roll the other committees of jurisdiction, namely Ways and Means, and Richie Neal, chair of W/M, wouldn’t have it. So he put a stop to it by suggesting his alternative. At issue is who bears the brunt of banning surprise bills, and it’s the insurers against the providers, with the providers favoring an arbitration model and insurers favoring benchmark payments. I’m actually optimistic that this gets done soon. We’ve seen several compromises floated—arbitration with guard rails—and this issue has been thoroughly vetted. So I bet this gets done in the next six months. And further to your point about work to be done at The Council’s Legislative Summit, this surprise billing issue is just the tip of the iceberg of the behemoth debate around a public option and ACA stabilization (or evisceration?) in 2021. They’re laying the groundwork now to move fast in the next Congress, and we’ve got a lot at stake. So I’m hoping none of our Council members feel like taking their foot off the gas right now.

The legislative “deal” that was brokered on surprise billing was only a deal to a few, and definitely not to the employers with self-insured plans who would have to spend money to lawyer up to go to arbitration. That certainly doesn’t help cut costs…clearly, I need to get off my soapbox and find some Christmas cookies.

I’m going to keep my fingers and toes crossed that impeachment doesn’t suck all the air out of the room and we are able to get things done…we have to, right?

I’m amazed that you, not JK, first raised the I-word, and 20 column inches in, no less (Joel more agitated to raise Council members’ taxes). The real enemies in surprise billing are the hedge funds that are vacuuming up specialty practices (emergency physicians, anesthesiology practices, air ambulances) that are at the heart of really sinister and abhorrent practices that are screwing patients and employers. They’re spending tens of millions of dollars targeting members [of Congress] only to muddy the waters.

Surprise billing should have been in the year-end package, but it’s been reported that Sen. Schumer wouldn’t agree because New York hospitals didn’t like the deal. Should I note that the hospitals are major political donors?

Just for the record, the tax cut as passed by the last Congress nearly resulted in a major tax increase for a lot of our pass-though members if we hadn’t scrambled to clean the mess up. Which we did. Just sayin’.

I’m sure whoever your party nominates will be all about protecting that tax cut for our member firms.

Whoa. I take a break to help my mom figure out how to charge her Apple Watch, and I think you both might still be chugging the egg nog…

I’d like to say that, because we’re backed by the strongest insurance PAC, we’re able to be in the room for all these discussions. And for that, I’m extremely grateful and proud.

I repeat it annoyingly, but it is so true that, if you’re not at the table, you’re on the menu. We all know interest groups whose ox was gored in that bill or who came away empty-handed.

Most remarkably, a bipartisan, bicameral funding bill for the entire government with hundreds of additional policy measures was adopted overwhelmingly, only two days removed from a similar bipartisan passage of the Mexico/Canada trade deal—and it barely made any national news. Doesn’t fit the script that Congress isn’t functioning.

So here’s to a happy, healthy new year, and hopefully we can continue to notch some wins that aren’t noticed in the national press!