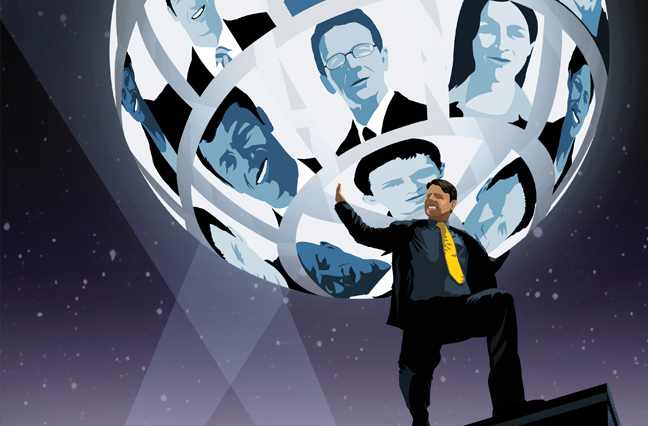 Governments around the world are reducing benefits under public health programs and increasingly shifting costs to employers and individuals in the private sector. Combine that trend with demographic shifts, more multinational companies competing for workers and evidence that the economy is slowly recovering, and the result is a new dynamic for employer-sponsored benefit programs worldwide.

“It’s an interesting business now that didn’t have a lot of attention before,” says Allen Koski, a vice president at Cigna Global Health Benefits. “There is a huge arms race in the agency world to try to figure this stuff out.”

“It’s an interesting business now that didn’t have a lot of attention before.”

Koski has been involved for more than two decades in developing and supporting international healthcare, global wellness, dental, disability and travel medical plans for multinational employers ranging from the Fortune 100 to emerging multinationals.

“When I started, I could name a handful of brokers who would even look at trying to come up with global solutions,” Koski says. “Nowadays, everybody at the big end is doing global benefits, but now I’m working with some of the regional producers that you would typically think of as domestic guys. They all realize you have to have something international. Their clients are saying, ‘Help me with this. I’ve got a factory opening in Portugal. What can I do about that?’ It’s become a big issue.”

It has the potential to become even bigger.

“It’s a big world out there,” Burns says. “Despite the size, power and prominence of our country, we’re still only 5% of the world’s population, and that world is changing dramatically.”

“It’s a big world out there. Despite the size, power and prominence of our country, we’re still only 5% of the world’s population, and that world is changing dramatically.”

How dramatically? Consider this: Separate projections from Deutsche Bank and Pricewaterhouse-Coopers predict that by the year 2050 China and India will have the world’s two largest economies, with the United States slipping to number three. Brazil, according to the projections, will overtake France and the United Kingdom to become the world’s fourth-largest economy, with Russia passing Germany to become number five.

In the meantime, the current economic situation has governments around the world struggling with deficits and requiring the private sector to assume more of the costs—and the risks—associated with healthcare.

“Today a great number of countries are struggling with the deficits that public healthcare systems are producing,” Willis’s Burns says. “As a result, at varying speeds, healthcare liabilities are being pushed out to the private sector, the employers.”

And with foreign markets outpacing U.S. markets as a source of future revenue for many multinationals, one in four companies plans to enter new markets in the next five years. The result is more multinationals operating in emerging markets.

The major benefits issue abroad is the same as in this country: mitigating healthcare costs. Recent studies indicate that annual healthcare costs are increasing an average of 10% globally and represent, on average, 10.5% of GDP in Organization for Economic Cooperation and Development nations (and 18% of GDP in the U.S.). The rising cost is so dramatic that it is becoming one of the biggest financial challenges for multinational companies while spurring rapid growth in employer-sponsored health programs.

“Recent surveys,” says Burns, “have demonstrated that gross medical inflation has grown to 10% on average in 2011, and it is expected to be the same in 2012. If you are a CEO or CFO of a multinational, what other cost item in your company grows by 10% per year? Clearly, 10% average inflation in healthcare per year is unsustainable.”

Ten percent inflation in healthcare globally… is untenable and unsustainable.

Burns identifies several trends as major drivers in the expanded role of global employee benefits. Chief among them is a significant change in the way companies operate as they expand around the world. As companies become more global, they also become less autonomous and more centralized, which can help reduce benefits costs.

“There has been a trend for multinationals to centralize procurement so that they can better utilize their bulk purchasing power as leverage to help reduce healthcare costs around the world. Global benefit consulting firms are assisting multinational firms in this process,” says Burns.

As employee benefits costs continue to increase around the world, finance, risk management and human resources are beginning to work together to develop more effective solutions to mitigate expenses and enhance financial efficiencies. But there is no one solution that works for all countries.

Alain Faignot, the international mobility director for the French insurance brokerage Verspieren, says that maintaining transparency while complying with different regulatory frameworks can be a challenge. Faignot says unions in France are particularly strong and that companies are reluctant to approve additional benefits beyond what is required for fear of not being able to scale back those additions if necessary.

“The unions are a part of every discussion,” he says. “You must deal with them. It means it is very difficult to go back.”

Burns and Koski say the one-size-fits-all approach won’t work. You can’t simply apply the benefits package you have in the U.S. to a foreign operation, because the laws and expectations are different in every country. The challenge is especially difficult for multinationals.

“How can we round out our customers but at the same time not get bogged down because it’s so complex?” asks Koski. “That’s kind of why they are going to a global healthcare platform. Because myself and the competitors in my industry have to make sure they’re legal in all these locations.”

“Global governance is becoming important,” says Burns. “If you are the head of HR in a global firm, there is tremendous pressure to gain transparency of benefits locally, make sure you are compliant, and utilize your bulk purchasing power to increase the efficiency of your benefit programs.”

Historically, the global trend has seen companies move from defined benefit to defined contribution pension plans. As this trend continues, the responsibility for retirement provisions is being shifted to the individual.

Both global and large domestic companies are competing for the best people as the war for talent begins to heat up around the world.

“Today,” says Burns, “unemployment is at relatively high levels around the world. Despite that, a war for talent is beginning to emerge. In the U.S., where we currently have a 7.8% unemployment rate, some employers in certain industries have positions open that they can’t fill due to a lack of education and training. That same phenomenon exists in many other countries. As a result, when employment begins to come back, the war for talent will once again become prominent.”

Largely unnoticed during the U.S. healthcare debate, wellness initiatives in the United States are exploding across health plans with encouraging results. Return on investment in the United States has been shown to be 3-to-1, and employers abroad are beginning to adopt their own wellness programs.

“Wellness is becoming a global issue.” Burns says. “It’s defined differently across the globe, but fundamentally it’s focused on reducing your healthcare costs by increasing the overall health of your employee population. Wellness is gaining traction globally, and it’s going to become a major global trend in the future. Although in its early days, initial results are showing as much as a four-to-one return on investment.

“As long as healthcare inflation continues to rise 10% per year, employers will remain highly focused on this issue and look for methods to mitigate costs,” says Burns.

Koski agrees. He says part of the growth is a direct result of public health programs being scaled back.

“Globally in the past, wellness has not been a big issue because why would you put a wellness program in when nationalized healthcare takes care of most medical costs?” Koski says. “Globally, employers are realizing, ‘I may not have a medical cost issue, but I have a presenteeism issue. I have productivity issues.’ I was talking to a benefit manager, and he said to me, ‘If one of my people gets the flu and chooses not to wash his hands and comes in when he is sick, I have half the factory out. That costs me tons of money.’”

“Globally in the past, wellness has not been a big issue because why would you put a wellness program in when nationalized healthcare takes care of most medical costs?”

Burns says it’s too early to tell how much money wellness programs can save globally, but he said it’s not unrealistic to expect the same 3-to-1 return on investment abroad as has been demonstrated in the United States.

“The problem is it’s really in its early days and it takes a couple of years before it becomes mature and a big part of the global scene for a multinational,” Burns says. “But I can say that some studies are showing that much, three to one, of an ROI in the initial stage of development.”

“Right now employers are staying away from being overly dramatic and draconian. It’s more like, ‘Let’s communicate, let’s do it pointedly in a focused way, and let’s develop programs that help people in each country according to what they need.’ However, as long as the 10% rate stays there each year, I think the draconian part will become paramount,” Burns says. “As this continues, employers will be more pointed, focused and more no-nonsense when it comes to these things.”

The challenge is to create programs specific to each country rather than apply the same program globally.

“When you have a company in four to six countries, people think, ‘Let’s put in a global wellness plan, and let’s roll this all out to everybody,’” Koski says. “But you can only pick a couple of countries at a given time because you have got to make sure that your rollout resonates culturally, linguistically. It has got to be a phased rollout over a period of years. You have to pick your low-hanging fruit.”

Industry Federal Tax Bill Breakdown
A conversation on Biden’s proposal, congressional response, and what it means ...
Industry Insurers’ Double Climate-Change Challenge
Quantifying the risk and addressing the realities of a no-carbon approach are da...

Industry Rethinking the Interview Process for Neurodiverse Talent
Altering hiring practices can help open the door to some of ...

Industry Insurance Industry Ripe for Analytical Talent
Neurodiverse candidates are ready to fill holes you might no...
As of Feb. 28, 2021, there have been 77 announced transactions in the United States. That’s a 26% decrease from this time in 2020.
Industry Resiliency Is Value