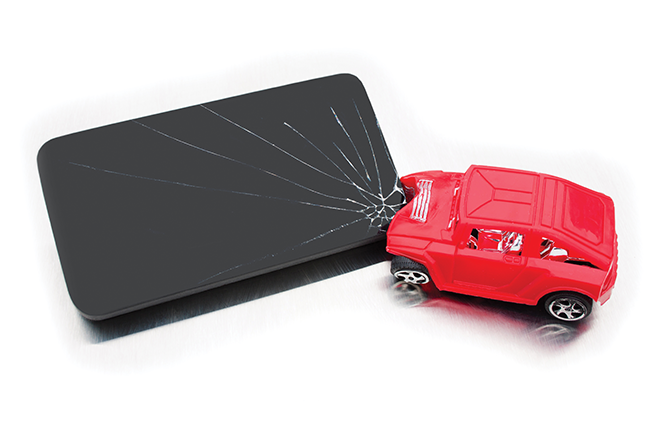 Texting and talking on mobile phones while driving has been blamed for a rise in accidents, but smart phones are also set to play a key role in the next generation of telematics tools that enable insurers to price risk based on actual driving behavior rather than other factors.

It turns out smart phones can tell insurers a lot more than current plug-in telematics devices.

To study how distracted driving and other behaviors can lead to auto collisions, consulting and actuarial firm Milliman teamed with driving analytics startup Zendrive to study more than 30 billion miles of driver data derived from smart phones to verify the behaviors that were strong indicators of collision frequency. The firm used the study data to create a driving risk score that it claims is up to six times more powerful than leading predictive models.

Smart phone apps provide some advantages over the plug-in devices that carriers offering usage-based auto insurance rely on. Those devices monitor things such as how fast the car is moving and cornering and how quickly it slows when the driver brakes. Mobile apps, however, provide data about a specific driver’s behavior rather than what the vehicle was doing.

“You can determine who the driver is,” says Sheri Scott, principal and consulting actuary at Milliman. “They will tell you if your phone isn’t in a hands-free mode and is being operated in a way that it probably shouldn’t be while you are driving.”

Mobile apps also make it easier and cheaper for insurers to get drivers involved in a telematics-driven usage-based insurance plan compared with plug-in devices.

“Plug-in telematics hardware is a huge barrier for entry for an insurance company,” Scott says. “If you have an app on your phone, it’s much more cost effective and instantaneous.”

Lowering that barrier to entry creates an opportunity for Arity, the telematics technology company founded by Allstate. Arity recently announced a deal to provide a mobile telematics app and services to National General Insurance.

“There definitely is a cost benefit from going to mobile,” says Arity chief data scientist Grady Irey. On top of that, mobile phones are ubiquitous today. “The opportunity to engage the end user in the experience of this telematics data is far larger with a mobile platform.”

Under the deal, Arity will help National General collect driver data using its mobile app as well as provide analytics capabilities for underwriting and pricing risk.

The deal marks Arity’s first with an insurer outside of Allstate, but the startup has been working with Allstate’s Esurance and Answer Financial. Arity has also launched a driver analytics product aimed at ride-share and shared mobility companies that uses predictive models to assess risk, driver behavior and other factors.

Going forward, telematics apps may help make driving safer, despite the distractions that smart phones can cause.

“There’s almost certainly a bit of self-selection in these [telematics] programs, but what we see is a clear sign that those who enter the programs do behave differently,” Irey says. “Some of this is being made aware of the relative risk of what your normal behavior represents.”