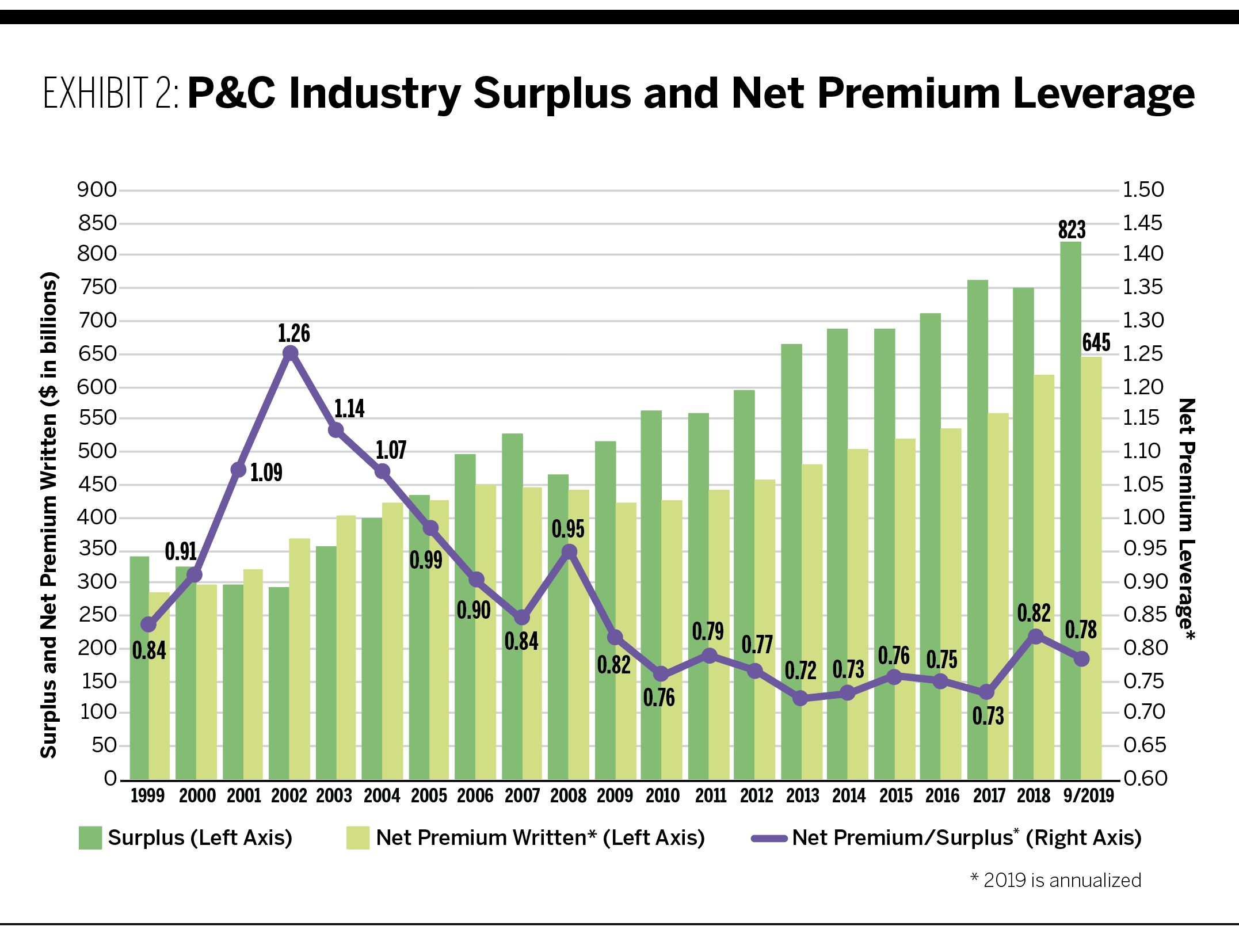 It seems that one cannot pick up an insurance trade journal nowadays without reading about an impending hard market.

References are made to a decades-long soft pricing environment, to social inflation and its impact on liability lines, to a correcting property reinsurance market, etc. In a recent article for Best’s Review, longtime industry leader and current chairman and CEO of Convex Insurance Stephen Catlin opined that the insurance industry is “facing a crisis of catastrophic proportions” tied to “vast shortfalls in loss reserves for casualty business, particularly U.S. risks underwriting over the past 10 years.” These reserve deficiencies, he wrote, could range anywhere from $100 billion to $200 billion. While perhaps hyperbolic, he expresses directionally what others are plainly anticipating: a classic “hard market.”

For the past 20 years, ALIRT has tracked rate adequacy in its quarterly macro industry reviews of the U.S. property/casualty industry. Given this ongoing research, we remain skeptical about whether the impending hard market theory will become a reality.

Exhibit 1 shows the quarterly commercial lines rate changes for the U.S. property/casualty industry over the past 20 years or so. The last true hard market was in the post 1997-2001 period, with rate changes in the 20%+ range for more than two years. Higher rates persisted through mid-2004, when rate changes turned negative. It is important to remember, however, that once insurance rates compound like this over a period of time, they likely overshoot “adequate” and become “excessive” (if partly to make up for losses in the past). For this reason, even when rates begin to decline, as in the period after mid-2004, they remained more than adequate for a period of time.

For this reason, it is very difficult to know the exact point of broad rate adequacy in any market cycle. What’s more, an aggregate rate adequate for one insurer might not be so for another, as companies have different return hurdles. To further complicate matters, insurers often have different mixes of business, both between personal and commercial lines (with the former much less prone to large price swings) and within the commercial sector, with each discrete line prone to its own mini-pricing cycle.

ALIRT does not disagree that we are currently in a firming rate environment for a number of commercial lines businesses. We are only questioning assumptions regarding the extent and severity of this pricing turn. There are substantial differences in the industry’s financial condition versus the last true market turn in 2001 that militate against the likelihood of a similar occurrence.

Taken as a pure supply-demand equation, industry surplus equals supply (or, in industry parlance, “capacity”) while premium written against that capacity reflects demand. The more this supply outstrips the demand placed on it, the less the likelihood of sustained higher pricing.

Exhibit 2 shows the relationship between industry surplus and net premium over time, indicating that for the last decade there has been substantial overcapacity in the U.S. property/casualty industry. This differs strikingly from the period between 1999 and 2002, when the industry’s surplus base was decimated by large operating losses and capacity was therefore greatly reduced, helping to drive the spike in rates.

Hard markets are closely associated with insurers’ need to repair balance sheets damaged by improperly priced business or, less frequently, large investment losses. Underwriting profitability is best expressed by the combined ratio, a metric which shows the amount of money made or lost on each dollar of premium earned (over 100% reflects an underwriting loss; under 100% indicates underwriting profits).

As shown in Exhibit 3, the reported combined ratio showed an underwriting loss of between six and 16 cents per dollar of premium in the period between 1998 and 2002. This was obviously not sustainable and resulted in enormous operating losses, declining surplus, and the subsequent failures of a number of large insurers. With fear abroad and the industry balance sheet in shambles, rates surged higher.

Contrast this environment with conditions today where the industry has reported underwriting gains (combined ratio <100) in five of the past seven years, surplus growth remains robust, and insolvencies are at historically low levels. What is more, the industry has released reserves in each of the last 14 years with much better underwriting tools at hand—not exactly a recipe for an imminent collapse in balance sheet adequacy.

Another way to measure the financial wellness of the industry—a key determinant as to whether a market is in need of substantial rate increases—is to look at ALIRT Scores, which represent a holistic synthesis of 45 key financial metrics. The higher the ALIRT Score, the stronger the relative financial position of an insurer or, in this case, composite (with 50 being the historical average).

As shown in Exhibit 4, beginning in 1999 the Commercial Lines Composite ALIRT Score began a multi-year free fall, reaching crisis levels in 2001. Contrast this with the results over the last decade, where ALIRT Scores have remained at or above the long-term average, including a rebound in the past two years. This, again, indicates the industry is not in a financial position that would warrant dramatic and sustained upward movement in rates.

Financial evidence suggests the U.S. property/casualty market remains on decent financial footing entering 2020. In addition, all of the four major rating agencies maintain a stable outlook on the U.S. commercial lines industry, and the price-to-book ratios of large U.S. commercial-lines predominant holding companies almost all stand at five-year highs. It is difficult to perceive the emergence of a true hard market in such a benign environment, and ALIRT would not be surprised if commercial lines rate increases crested within the coming year, resulting in another mini-hardening cycle such as experienced in 2011-2013.

See More: Carriers Insurance Rates Underwriting
1
Industry The ESG Storm Is upon Us
2
Industry Relentless Pursuit
3
Industry Who's to Blame?