Global warming affects everything from shipping lanes to fine art.
By Cheryl Arvidson Posted on October 1, 2013 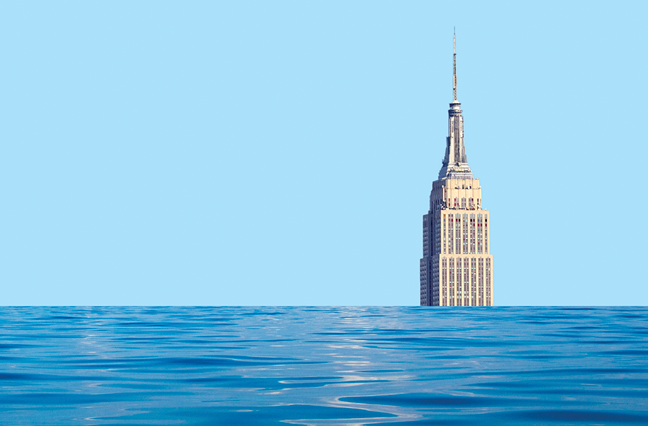 When two leading insurance underwriters for XL Group’s marine and fine arts specialty lines focus their eyes on the elements of future risk, one looks up and the other looks down.

For Rich DeSimone, the president of XL Group’s North America Marine business, the receding ice caps in the Northern Hemisphere and the potential for arctic sea lanes to be opened year-round are major considerations as he looks ahead to the changes—and new risks—that shipping will experience.

For Jennifer Schipf, the senior underwriter for XL Group’s Fine Art & Specie business, the flood damage wrought by Superstorm Sandy in the basements of art galleries and warehouses in and around New York City gives her pause.

Roland Murr, the vice president of research at XL Global Asset Protection Services, says climate change is affecting both marine and art underwriting and every other risk underwritten at XL that involves water in some form.

The earth’s temperature has been increasing since the 1850s, when scientific recording began, Murr says. But the increase has become greater in the last 30 to 40 years due to more carbon dioxide in the atmosphere from the burning of coal for heating and the burning of gasoline in automobiles. Even if average temperatures have increased minimally, Murr says, extreme weather conditions—long, cold winters and long, hot summers—have become more frequent.

“Then you have the other problem with overall global warming resulting in the meltdown of the Antarctic ice, which means eventually the sea levels increase,” he says. “And that poses two threats for people living on the coast: gradually growing sea levels, and, in the case of major storms, the protection systems like dams and other things that were installed 50 years ago are no longer adequate to protect the people.”

DeSimone says global warming has contributed to one of the biggest changes in maritime trade over the last several years—the effort, led by the Russians, to start moving ships across areas in the Arctic seas that had traditionally been ice-bound for nearly 12 months a year. These shipping lanes speed travel time between the Atlantic and Pacific oceans.

“With receding ice caps in the Northern Hemisphere, ships are moving through northern sea routes,” DeSimone says. “That saves about 20% in transit time because it is a much faster way, and it also saves in fuel-related expenses because you can deliver goods much more quickly. But it is an uncharted area because the area is not well transited, the knowledge of the area is not as well known, and there are not as many support services. It will take some time for an infrastructure to be established there with salvage ships in the case of an incident and the ability to service ships.”

If vessel owners and cargo owners have an opportunity to move goods faster, DeSimone says, “They will take whatever routes are the most beneficial to them, but the uncertainty of the new route falls squarely on the underwriters.”

“They will take whatever routes are the most beneficial to them, but the uncertainty of the new route falls squarely on the underwriters.”
Rich DeSimone, XL

So far, he says, there has been no market-wide decision on how to respond, with some underwriters willing to accept a change in the trading warranties, which specify where ships can operate, without charging higher premiums.

“Others recognize the need for higher premiums because shorter routes provide greater risk,” DeSimone says. “It poses new risks for the underwriters, and we as underwriters have to decide how we will deal with those new risks.”

Among other future risks and challenges that DeSimone says will figure in marine underwriting are:

“It is an increasingly sophisticated, complex risk, and the potential of an extremely large loss is growing every day,” DeSimone says. “It is an opportunity for underwriters to understand the new exposures that exist out there, decide what coverage is appropriate, what kind of limits they are willing to commit to a given risk and then how to price these kinds of risks.”

While DeSimone is concerned with goods moving through water, Schipf, the fine arts expert, is focused on water moving onto goods—specifically, valuable art owned by galleries, museums and individual collectors.

“Water damage is one of the two most common coverages of loss to fine art, the other being transit damage,” Schipf says.

Water damage can be caused by anything from a catastrophic event, such as Superstorm Sandy, to a more isolated instance in which art owned by a collector or a gallery is damaged by a waterline break, a leaking roof or other plumbing crisis in a home or business.

“The owners of the art and the custodians of the art don’t have control of what the tenants above them do,” Schipf says. “So if folks don’t own the entirety of the space in which they reside, they are at the mercy of their neighbors.”

For art owners and patrons, the common use of subterranean storage spaces by art galleries in the Chelsea neighborhood of Manhattan and in parts of Brooklyn and Queens exacerbated the damage caused by Superstorm Sandy, which struck most ferociously along the Jersey Shore and in New York City in October 2012.

“We had one Sandy claim where the gallery had done everything they could do to protect against flooding in the basement and had three sump pumps,” Schipf says. “But when Sandy struck, the electricity went out so the pumps didn’t work, and the amount of water was so great that it was not a reasonable amount to remove in time,” even after electrical power was restored.

Schipf says the flooding also resulted in losses in subterranean vaults storing currency, securities and gold bullion, but those losses did not compare to the damage to fine art. The market had been soft for so long that carriers were not writing huge flood deductibles prior to Sandy, compounding losses from the storm.

“That is not the case now,” she says. “Risks tend to be handled on a regional basis. But basically, where there are catastrophes, the entire market has to pay attention. It is rare that any company doesn’t change its view or revisit underwriting guidelines following a catastrophe.”

As a result of Sandy, Schipf says, XL and many other companies no longer cover fine art stored in basements, even if a customer is not in a flood zone.

“It has become increasingly apparent that putting art in basements is much riskier than putting art above ground.”
Jennifer Schipf, XL

“Underwriters are asking, ‘What do you plan to do the next time? What can you do better to demonstrate that you are still a good risk?’ Galleries are considering evacuation and relocation plans,” she says. “How do we get all the art off the ground floor and up to the second story? Or can we move to an offsite storage location that is not in a flood zone?”

In the future, Schipf says, underwriters might start regarding floods “as sort of a third catastrophic peril,” joining the historic natural catastrophes of earthquakes and hurricanes. As well as requiring higher deductibles, underwriters will be looking at flood sublimits on all-peril policies to better manage their portfolios and limit the maximum exposure, she says.

“Earthquake and wind are underwritten quite carefully and specifically,” she says. “I am saying flood will increasingly be considered in the same way.”

Murr, the water risk specialist, says underwriters are studying numerous models that can help predict both how often a certain area, or even a specific address, could be flooded, the height of the flood, and what type of flooding, such as river or storm surge, might be involved.

“That is one way we try to manage our risk from flooding,” he says. “The other one is looking at preventive features like dams and things like that. We decide if we want to write the risk and up to what amount we want to write in terms of location. It is equally important to monitor the sort of accumulation of risk—meaning how many locations in the same area are subject to the same flood event.”