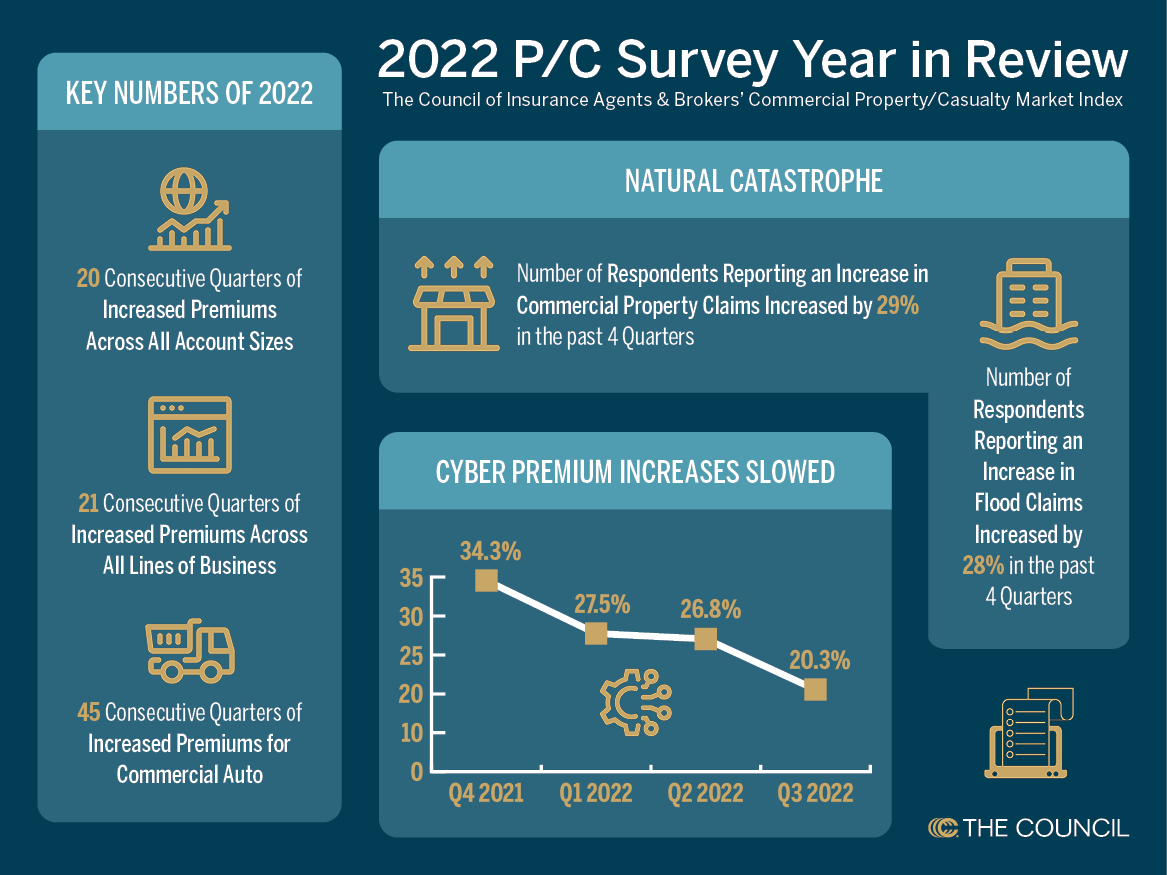 20: number of consecutive quarters of increased premiums for all account sizes

21: number of consecutive quarters of increased premiums for all lines of business

95%: number of respondents who agreed inflation influenced premium pricing in 2022

Premium pricing stabilized slightly in 2022, with slower increases for most lines compared to 2020 and 2021. The majority of lines recorded lower average increases at the end of 2022 compared to the beginning of the year.

Workers compensation was the only line that saw a decrease in 2022, with premiums, ending the year at -0.7%.

Despite the slowing of increases, respondents were clear that market conditions were still challenging in 2022, pointing to tight underwriting, increased scrutiny, and decreased carrier appetite.

The Cyber Line of Business

After hitting a record high premium increase of 34.3% in Q4 2021, cyber premium prices showed some signs of stability during 2022. The rate at which premiums increased slowed over the course of the year, down to 20.3% in Q3 2022. But problems with the line still remained.

Respondents described continued carrier efforts to contain losses for cyber, including much stricter risk control requirements. For example, respondents noted that carriers would often not even provide quotes if the insureds did not have basic cybersecurity guardrails in place, such as multi-factor authentication. Respondents also mentioned reduced capacity and incorporation of sublimits for certain coverages, like ransomware or cyber extortion, even on accounts with clean loss histories.

Nevertheless, some brokers also mentioned that they were able to help their insureds temper rate increases for the line if they had properly implemented risk controls, and others noted a slight slowdown in cyber claims. It remains to be seen whether this stabilization will become more pronounced in 2023.

Despite the slowing of increases, respondents were clear that market conditions were still challenging in 2022, pointing to tight underwriting, increased scrutiny, and decreased carrier appetite.

Ninety-five (95%) of respondents reported that inflation had an impact on key market trends in the insurance industry—in particular when it came to the commercial property and commercial auto lines of business.

In terms of commercial property, respondents explained that  inflation was driving up construction costs, which in turn pushed up property valuations, and those higher property valuations caused underwriters to adjust premiums upward to absorb the increased costs.

Brokers also reported having to spend more time working with their clients to ensure the total insurable value of their properties reflected actual material costs after inflation.

Much like in the commercial property realm, inflation also contributed to increased repair and replacement costs for vehicles in 2022. This meant costlier claims, both due to increased loss costs and increased administrative costs, and that, combined with an increase in auto claims over 2022, likely was one of the main drivers of higher auto premiums, according to respondents.

Weather-related issues were so pronounced for commercial property in 2022 that in Q2, one respondent declared “Hurricane season had a far greater impact [than inflation],” before Hurricane Ian had even struck Florida.

Other natural catastrophes, such as the flooding in Kentucky and Tennessee and the wildfires in the Northwest (bad enough that Seattle had the worst air quality in the world in late October), also triggered sizable losses and increased claims, reflected in survey results. The percentage of respondents reporting increased claims for commercial property went from 27% in Q1 2022 to 56% in Q3 2022, while the percentage of respondents reporting increased flood claims went from just 2% in Q1 2022 to 30% in Q3 2022.

As a result, respondents reported more insurer wariness when it came to coastal property and property near wildfire-prone areas in 2022, marked by increased storm and wind/hail deductibles and significant rate increases and reductions in capacity. Respondents also noted lower limits, and some even said they had to build layered programs of property insurance coverages with multiple carriers in 2022, compared to being able to work with just one carrier in 2021.