Move quickly and adjust your approach based on how others react.
By Chris Hann Posted on October 27, 2017 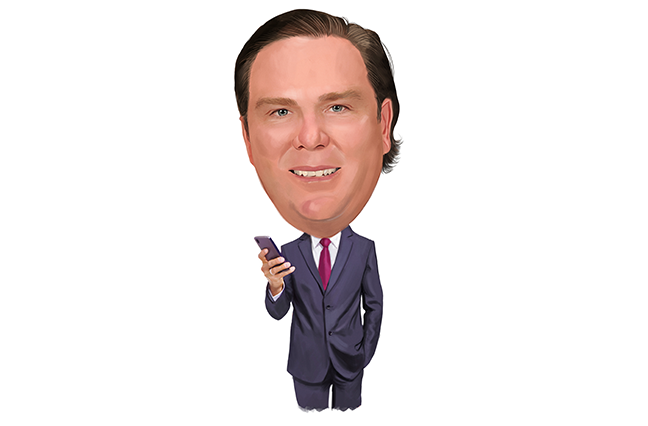 Q
Your office is in San Francisco. Do you live in the city?
A
I work out of San Francisco, but I actually live outside Salt Lake City. We also have a home in Houston.

How did your Houston home fare in Hurricane Harvey?
Thanks for asking. We had water come up to the top of the foundation, but it didn’t come into the house. We have lots of friends who weren’t so fortunate. Eighty-five percent of people in Harris County didn’t have any type of flood insurance.

Wow. And you’re probably looking at months of recovery.
It is going to take years to fully recover. The city of Houston has experienced three 100-year floods in the last 10 years.

What do you hear from your friends and neighbors?
Although it was catastrophic in nature, you saw the best of people in helping each other. So some good came out of the devastation.

Did you grow up in Houston?
Yes, Houston is my home. I went to school at Texas A&M. I had the fortune to coach baseball at Texas A&M.

While you were still a student?
I was a student coach, then a graduate assistant, then a full-time coach and recruiting coordinator out of school.

And you were a political science major. Did you ever want to go into politics?
I worked on two presidential campaigns. In 1988, I worked for the George H.W. Bush campaign. In 1990, when Bush was in office, I interned with the Treasury Department, in the Office of Legislative Affairs.

What’s your recollection of President Bush?
I think he’s one of the greatest citizens of the United States. He’s just a guy who, in my opinion, always had the country’s best interest at heart.

What have you learned from your experience in a campaign and in government that you have applied to your business career?
You move quickly, and you have to adjust your approach based on how others react. It’s a great life-learning experience regardless of which side of the aisle you sit on.

Were you always interested in politics?
I was. I was involved in student council and other leadership groups growing up. I had the honor of being president of my class at Kingwood High School.

Tell me about your volunteer work with disabled veterans.
I became involved with a project called Entrepreneurship for Veterans about 10 years ago. Every other summer, I go back to Texas A&M to speak with a group of disabled veterans who are starting their own businesses. It’s an intensive time where veterans interact with professors and business leaders. We are also involved with the National Ability Center. Both organizations perform a great role for our veterans.

What’s made you so passionate about the insurance industry?
Insurance for many of us is nothing more than a promise. It’s an awesome responsibility to help individuals and companies plan for events they hope will never happen and to be there to deliver, to help.

If you hadn’t gone into insurance, what would you have done?
I was either going to become a professional baseball scout or go into the insurance business.

What’s the most surprising thing about Salt Lake City?
It’s a unique place to live and work. Downtown is like most metropolitan cities, but you’re within 20 minutes of the very best hiking and world-class skiing around. I think the biggest thing that people would find surprising is that Salt Lake is quite diverse.

Have you had one mentor who’s been most influential in your career?
Mark Johnson, the longtime baseball coach at Texas A&M. He’s been a great mentor to me. He’s a legendary baseball coach—he’s in the College Baseball Hall of Fame and the Texas A&M Hall of Fame. You learn a lot from someone when you compete 60 to 70 times in a season. He’s still one of my closest friends, which is a bit odd given he’s my father’s age and he has kids my age.

What is something your co-workers would be surprised to learn about you?
Probably that I’ve been involved in politics. You don’t really advertise things when you know that 50% of the population doesn’t share your thoughts or beliefs. And they’d probably be surprised to know I still enjoy a Harley ride up and down the mountain.

If you could change one thing about the insurance industry, what would it be?
Perhaps being more innovative; we need to embrace change and technology to forge ahead.

What gives you your leader’s edge? I work with a lot of good people who work tirelessly to improve their clients’ situation, and that’s fun.

Favorite Movie: “Anything that has Chevy Chase in it.”

Last Book Read: House of Nails: A Memoir of Life on the Edge, by Lenny Dykstra