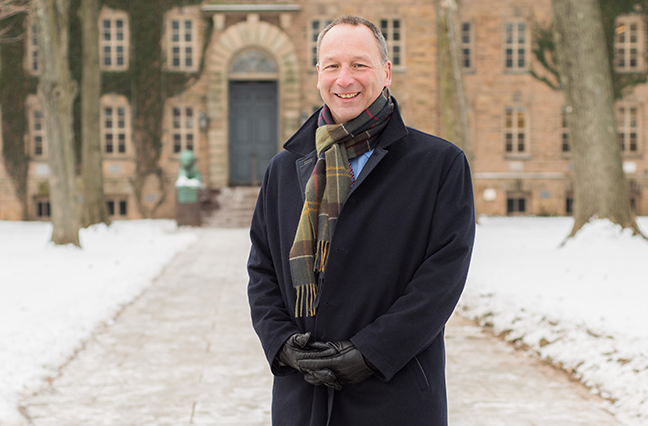 Anthony Kuczinski, President and CEO of Munich Re, shares more about the Garden state.

Restaurant scene >> Farm-to-table restaurants are a tasty trend, but we also have a lot of iconic eateries—PJ’s Pancake House for breakfast, Hoagie Haven for subs, Conte’s for pizza, and Thomas Sweet for ice cream—which were favorite stops for my family when the girls were growing up.

Favorite restaurant >> Witherspoon Grill.  It is considered a steakhouse, but Nassau Street Seafood & Produce Co. supplies it with incredibly fresh fish. It’s usually hopping with music inside, and has outdoor seating. It’s perfect for kicking back and people watching, but also a comfortable environment for business dinners or cocktails.

Stay >> Nassau Inn. Located on Palmer Square, the inn’s original building, built in 1756, hosted prominent figures of the time, including many founding fathers. It moved to its current location in the early 20th century and has since undergone renovations.

Cocktails >> I like to take clients to the Yankee Doodle Tap Room at the Nassau Inn. There’s a large mural by Norman Rockwell behind the bar, and the names of students and others associated with the university such as “Dr. Einstein” are carved into the old wooden tabletops.

Do >> Each spring the Communiversity ArtsFest features artists, crafters and nonprofits, with nonstop music playing on six stages. If you love art, visit the Princeton University Art Museum, whose collection ranges from Greek and Roman antiquities to modern and contemporary pieces, including works by Monet, de Kooning and Warhol.

Active >> Princeton is known for rowing—whether watching some of the best U.S. athletes compete or joining a crew team. Delaware and Raritan Canal State Park has miles of hiking and biking paths and canoes and kayaks available for rent. My favorite golf course is TPC Jasna Polana, the former estate of John Seward Johnson. Designed by Gary Player, the course is recognized among the top private golf courses in New Jersey.

Factoid >> Nobel Prize winner John Forbes Nash Jr., subject of the biography and film, A Beautiful Mind, served as senior research mathematician at Princeton University. Nash was once a special guest at a Munich Re client event at the Nassau Inn.