When I told Hillary Clinton she was my inspiration for doing the work I do…she said that’s what makes her continue her journey.
By Chris Hann Posted on July 18, 2017 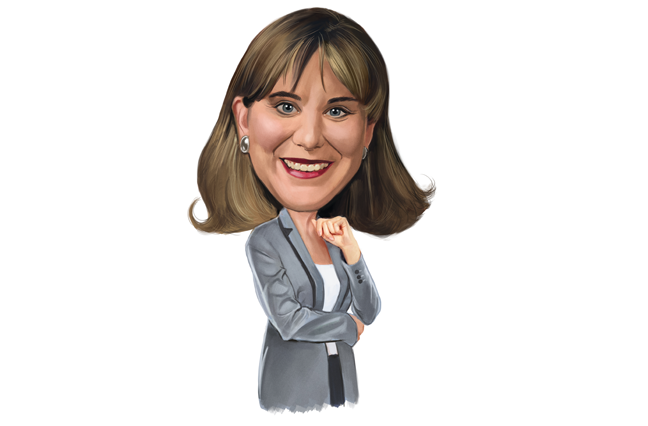 Q
Did you grow up in Philadelphia?
A
No, a little town in southwest Pennsylvania called Waynesburg, close to the West Virginia border. It’s a coal-mining area, a very small town. Everybody knew everybody. I grew up on a 119-acre farm, but that wasn’t my parents’ livelihood. My dad was an elementary school principal. My mom stayed at home when we were kids, then went back to work. She also worked in insurance. I have two siblings, and you had to get along because you didn’t have other playmates. Your closest neighbor was a few miles away. We only had two channels on TV, so we played outside a lot. We fished, we explored.

Who were your childhood heroes?
I’ve always been drawn to political leaders. In second grade I was obsessed with Abe Lincoln. Being a small, country-town lawyer and making it big, that was inspiring. Also, he used his influence to help those less fortunate. And that’s always a trait that my parents instilled in me. Even as a child, you were kind to everybody, you didn’t make fun of other people, didn’t bully them. I saw those traits in Abe Lincoln. He fought for an entire community.

Did your Abe Lincoln obsession have anything to do with your decision to go to law school?
My passion for going to law school was more from Hillary Clinton. By sixth or seventh grade, she was on my radar screen. I started researching children’s causes and her work with the Children’s Defense Fund. Her book, It Takes a Village, resonated with me.

Were you active in her campaign?
I’ve been a Hillary supporter since 2008. When I met her, I told her she was one of the reasons I volunteered at the Support Center for Child Advocates. It’s a nonprofit organization that provides legal services to children who are in the care and custody of the Department of Human Services.

Tell me about your work with the Support Center.
Someone calls the hotline and says, “I think the child is in danger.” Maybe I see bruises. Maybe the child has told me there’s been some abuse. If the agency determines it’s a credible threat, it files a petition with the court. The court assigns an attorney. I make sure at every court proceeding the child’s voice is heard, that the child is provided for. Most importantly that the child is safe. My main objective is to make sure all decisions made by the court are in the child’s best interest.

What’s your caseload like?
I always have an active case. The case I have now has two children. That was one of my conditions of employment at Conner Strong—that I be permitted to continue my pro bono work, because it is so important to me. Without hesitation, they let me continue.

Is there a case in particular that stands out?
Every case stands out for me. Those first few years of life are so precious. When you get a young child, getting them on track is so important. I’ve had some tough cases, with criminal components to it. My hurdle is not to get emotionally invested.

That must be hard.
That’s impossible for me. I just make sure the days I go to court end with a few glasses of wine.

Tell me about meeting Hillary.
I met her when she came to Philadelphia early on in the campaign. When I told her she was my inspiration for doing the work I do with the Support Center, she was very touched. She said that’s what makes her continue her journey.

What appeals to you about the insurance industry?
It’s the safety net in everybody’s life. It’s interesting; it’s complex and ever-changing. And it’s a great career for women.

I don’t hear that very often.
It is a male-dominated business. But luckily the men who dominate it no longer hold the door shut for women to walk through it. They are opening those doors.

If you could change one thing about the insurance industry, what would it be?
The lack of diversity at the top. That is something that is sorely missing.

What gives you your leader’s edge?
Empathy and insight. I’m able to work out a complex situation, empathize with everyone involved and come up with a strategy to resolve it.

Favorite Vacation Spot: My parents’ home.
(And I love Italy. I’m going back this year.)

Favorite Movie: An Affair to Remember

Favorite Leader: Eleanor Roosevelt (Always fighting to improve the lives of others. She was first lady—she couldn’t be president—but she took that role to a whole new level.)

Three Favorite Philly Restaurants:
Rangoon (A Burmese place in Chinatown. I love the women who own it.)
Gran Caffe L’Aquila (It reminds me of my family in Italy.)
Dizengoff (All they serve is hummus.)