With a new stadium, new ballpark and several major sporting events on tap, Atlanta is taking off.
By Carrie Williamson Posted on July 24, 2017 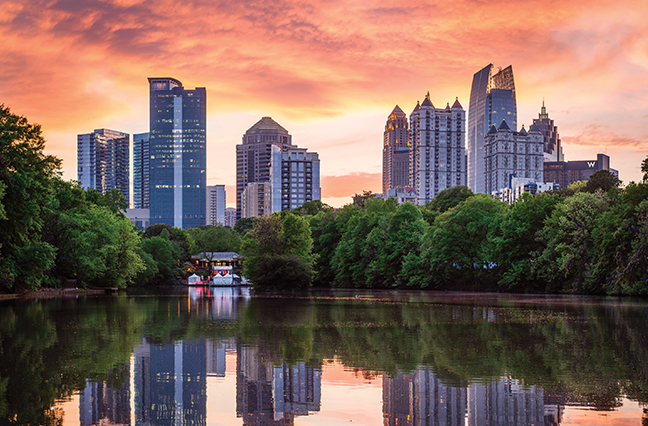 Forty-one feet high, weighing 73,000 pounds, with a wingspan of 68 feet, the stainless steel falcon, on display outside the new $1.5 billion Mercedes-Benz Stadium in Atlanta, is the largest freestanding bird sculpture in the world. Designed by Gábor Miklós Szőke, who studied at Savannah College of Art and Design, the sculpture is also a tangible symbol of the Atlanta Falcons, who will kick off their fall season in the new retractable-roof stadium. The raptor, clutching a football in its talons as it takes flight, could also be a metaphor for the city. Reflecting the Falcons’ “Rise up” slogan, Atlanta is soaring in a visionary new direction.

There is a roster of reasons you will want to check out the new stadium, even if you are not a Falcons fan. The city’s new Major League Soccer team, Atlanta United FC, will also play there. And it will be the site of three major upcoming sporting events: the College Football Playoff National Championship in 2018, Super Bowl LIII in 2019, and the 2020 NCAA men’s basketball Final Four.

In other splashy sporting event news, this season the Atlanta Braves began playing at their new ballpark, SunTrust Park, which is surrounded by The Battery Atlanta entertainment complex. Among the current eating and drinking establishments is The Terrapin Taproom, which features craft beers from the Athens, Georgia-based microbrewery and BBQ. Coming soon is C. Ellet’s, an American steakhouse/New Orleans mash-up by chef Linton Hopkins, who tied for the James Beard Best Chef: Southeast Award in 2012. For music, the Coca-Cola Roxy Theatre, a state-of-the-art resurrection of the legendary Buckhead club that closed in 2008, is showcasing acts like current heartthrob Harry Styles.

For a hands-on sporting experience, check out the Porsche Experience Center, where you can road-test one of 75 of the latest-model Porsche vehicles on the 1.6-mile track. The $100 million, 27.4-acre complex, which opened in 2015, offers the one-on-one supervision of a drive coach, such as professional racecar driver Shannon McIntosh. The six different track modules include the Handling Circuit, designed to mimic a winding country road, where you learn how to navigate curves and properly brake.

The city’s most visionary project might be the Atlanta BeltLine, a sustainable redevelopment of the old railroad corridors that once encircled the city. It will eventually connect 45 neighborhoods via a 22-mile loop of multiuse trails, but for now you can hike and bike along the Eastside Trail, which runs from Piedmont Park to Inman Park and the Old Fourth Ward and has public art and cafés where you can stop along the way. Take a breather at the Ponce City Market, just north of the North Avenue bridge in the old Sears, Roebuck & Co. building, where you can enjoy a glass of wine at City Winery, eat Southern seafood at W.H. Stiles Fish Camp, and shop at upscale boutiques like Q Clothier.