What if the Dems* Took it All in the Fall? 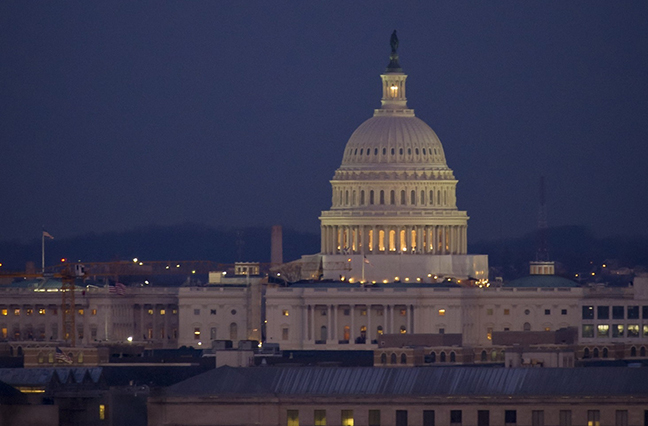 Joel Kopperud (It Could Happen!) vs Joel Wood (Please, No!)

But 2012 could again bring change to Washington, and if Democrats win control of both Congress and the White House (albeit highly unlikely), the impact on our industry would be significant. In fact, it would be reminiscent of the 111th Congress.

Consider this: The potential Democratic chairs of the committees of jurisdiction in the House would range from Rep. Maxine Waters, D-Calif., to Rep. Henry Waxman, D-Calif.

THE HOUSE
Democratic leadership of the House Financial Services Committee will change drastically, following the retirement of Rep. Barney Frank, D-Mass., which is a big loss to our industry. Frank is one of the most reasonable Democrats on the Financial Services Committee on our issues, and his engagement on commercial property-casualty matters resulted in passage of surplus lines reform and the creation of the Federal Insurance Office—initiatives we have worked very hard to advance.

His retirement this year will make Rep. Waters the senior Democrat on the committee (assuming a Democratic majority continues to use current seniority guidelines). Waters is reflexively pro-consumer on insurance matters, and we would be challenged to make consumer-friendly arguments to win her over. Moreover, we would rely heavily on moderate Democrats on the committee to influence their like-minded colleagues. We’ve got some good friends in that group.

House committees overseeing health insurance matters would have leadership that is equally as consumer-driven as Rep. Waters. Just remember the House-passed version of Obamacare and you get the picture. Assuming seniority rules continue, the Energy and Commerce Committee would place Henry Waxman in the chair, the Education and Workforce Committee would (in addition to changing its name to the Education and Labor Committee) be chaired again by Rep. George Miller, D-Calif., and the Ways and Means Committee would be chaired by Rep. Sandy Levin, D-Mich.

It’s fair to say that each of these chairmen would support Speaker Nancy Pelosi’s agenda, but they’d be more likely to amend Obamacare—something we’ve been practically begging our Republican friends to do since they took control of the House. Rep. Pete Stark, D-Calif., an avid supporter of a single-payer system, would chair the Health Subcommittee on the House Ways and Means Committee.

Rep. Frank Pallone, D-N.J., who would chair Energy and Commerce’s Health Subcommittee, and Rep. Rob Andrews, D-N.J., the potential chair of the Education and Workforce Health Subcommittee, would be more tempered. Both supported the passage of Obamacare but balked at party leadership and supported a compromised version that excluded a government option. Andrews is also a co-sponsor of our legislation to remove broker compensation from the MLR.

THE SENATE
As usual, Democratic senators would be more tempered in their consideration of our issues. Sen. Tim Johnson, D-S.D., has long been a close friend, and he’d retain chairmanship of the Senate Banking Committee.

Our good friends Sens. Jon Tester, D-Mont.; Mark Warner, D-Va.; Michael Bennet, D-Colo.; and Kay Hagan, D-N.C., would continue to be our leaders on property-casualty issues and keep a common-sense approach on matters like flood insurance reform and the creation of a national broker licensing regime.

Healthcare reform efforts would be led by Sen. Max Baucus, D-Mont., on the Senate Finance Committee and Sen. Tom Harkin, D-Iowa, on the Health, Education, Labor and Pensions Committee.

THE PRESIDENCY
If President Obama wins re-election, the issues we’ve been advocating for more than a year could actually become law, but they wouldn’t come without sacrifice. Our efforts to remove broker compensation from the MLR have broad support, but Republican priorities to completely dismantle Obamacare are sucking the wind from our sails, and our legislation hasn’t budged because of it. Democrats, on the other hand, would be inclined to “fix” and strengthen Obamacare, but there is a price tag attached to that.

With the support of a Democratic Congress, the Obama administration would likely implement Obamacare to the letter of the law and include a robust federal insurance exchange, premium rate review at Health and Human Services, and strong federal oversight of state exchanges that limit industry involvement and define a negligible broker compensation scheme. While these aren’t positive developments for our industry, the regulatory trajectory would bring some predictability to a benefits marketplace that is currently confused and reeling from skyrocketing costs.

Healthcare reform matters may look grim for our industry in a Democrat-controlled Washington, but the light on the property-casualty front is significantly brighter. These issues are historically non-partisan and tread on business-versus-business political warfare as opposed to the partisan ideology that drives healthcare reform. In this space, our members are market leaders and the biggest and most successful companies in the country. And when I translate that market force (and its unique set of issues) into the political sphere, I see congressional Democrats much more likely to carry our torch than their Republican counterparts.

Consider this: President Clinton revolutionized the Democratic Party in the 1990s. Clinton considered the federal government critical to achieving economic growth. He believed the federal government should be a tool that supports and stabilizes the private market. This philosophy helped us create a federal backstop for terrorism insurance that allowed economic growth in large cities across the country to resume following 9/11, and it supports a National Flood Insurance Program that enables economic development in flood-prone areas that might not otherwise be robust. The philosophy is also the backbone of conversations to create a federal insurance charter for commercial and international lines of insurance. It also helped build two, strong, business-friendly forces within the modern Democratic caucus—the New Democratic Coalition and the Blue Dog Coalition—that collectively boast 67 members. These members typically champion our position on property-casualty issues, and they’ll be essential to reauthorizing the Terrorism Risk Insurance Act in 2014.

REPUBLICAN CONTEMPT
To provide contrast, consider this: Republican members of Congress have for decades demonized the federal government’s interference with the private market. Consider how conservative Republicans opposed passage of a financial bailout that saved our national economy from a disaster that was predicted to be worse than the Great Depression (a scenario that resulted from weak federal oversight over companies more concerned with quarterly reports than long-term stability).

Republican anger over the bailout spawned the rise of the Tea Party’s influence over Republican leadership, and the official House Tea Party caucus now boasts 67 members. The latest attacks on the federal government from House Republicans resulted in government shutdowns and temporary expirations in the National Flood Insurance Program (some even voted to eliminate the flood insurance program in the name of deficit reduction).

Had Republicans controlled the 111th Congress, their contempt for any regulatory “burdens” that would include federal reporting requirements would have almost certainly denied the creation of the Federal Insurance Office.

That’s why these politics matter. Brokers who operate on national and international levels need pragmatic solutions that resolve conflicting state regulations, not strengthen them. The legislative result of a Democratic Congress is admittedly a mixed bag for our industry, but predictability and national and international regulatory harmony led by logic, rather than ideology, benefits the market.

The triumph of Democrats is not a good thing for the business of commercial insurance brokerage. I repeat: Democratic control of the House, Senate and White House is not good for us.

Let’s assume that the GOP nominee turns out to be as beneficial for his party as, say, Sen. Barry Goldwater proved to be for his back in 1964. Rep. Nancy Pelosi, D-Calif., would retake the speaker’s gavel. Sen. Harry Reid, D-Nev., would maintain his majority. And Barack Obama would return for a second term. It’s tough to argue that this is good for the insurance industry, especially when many Democratic leaders conveniently demonize us and periodically throw us under the bus.

There is one reason to forcefully oppose such a scenario: full implementation of Obamacare. This would set the country on an unsustainable path of subsidies that presage the demise of employer-provided group health insurance. What we got in the Patient Protection and Affordable Care Act was health insurance reform, not healthcare reform.

The creation and encouragement of exchanges for uninsured Americans, properly constructed, can be a very good thing, but without major changes, they’ll wind up being halfway houses on the road to single-payer healthcare.

I’m in my 20th year at The Council, and I’ve always said the best thing about the job is that we’ve been able to establish so many good relationships on both sides of the aisle. That certainly remains true today, particularly on so many property-casualty and regulatory issues that really don’t have a philosophical partisan tilt. But unfettered Democratic control of Congress and the administration produced for us the only massive entitlement reform ever passed on a purely partisan basis.

How, for example, could Congress pass comprehensive, massive national healthcare reform that does nothing to lower the cost of defensive medicine? The Patient Protection and Affordable Care Act, as well as the Dodd-Frank financial services reform act, have new legal rights-of-action tucked into every corner. This is a result of trial lawyers—the funding base of the Democratic Party—and labor unions having their way.

Let us also not forget that the bill that Harry Reid and the White House wrote in late 2009 would have created a federal regulatory authority to govern benefits brokerage compensation, notwithstanding all of the “state-friendly” verbalized intentions of the legislation. Thanks to a handful of thoughtful moderate Democrats, we were able to knock that provision out. But that’s what we would have gotten with no counterbalance in political control.

To be sure, I am a Republican, but not one without some concerns about some Republican ideas. Mitt Romney (full disclosure: I’m a contributor) said in the Florida primary that the problem with health insurance is that employers get tax breaks and those breaks should go instead to the consumer. Many aspects of consumer-driven healthcare are appealing, and surely individuals should be able to purchase health insurance on a tax-advantaged basis. But blowing up the foundations of employer-sponsored care (that’s 166 million Americans) would be catastrophic.

At the end of the day, I’m sure Republicans wouldn’t do violence to the employer-sponsored group health insurance marketplace. As well intentioned as most rank-and-file Democrats are in their support of the Affordable Care Act, and as grateful I am to the Democrats who helped us and continue to do so, the full implementation of the law is unsustainable to the federal budget and will drastically undermine the ability of our member firms’ clients to provide a healthcare safety net for their employees.

Sure, on flood insurance, on regulatory affairs, on property-casualty issues generally (notwithstanding a scary new Housing and Urban Development proposal that could regulate homeowners insurance as having a “disparate” discriminatory impact), we have good relationships on both sides of the aisle, and we’ll be able to navigate any Congress and any administration.

It’s a source of great disappointment that healthcare reform to date is such a bitterly partisan affair, and there’s plenty of blame to go around for that. But there can be no doubting that major changes in that law are absolutely necessary. Those changes can’t occur with the status quo or with Democratic control of Washington.