Insurance can cover an environmental loss, but it won’t cover it up.
By Cheryl Arvidson Posted on November 26, 2013 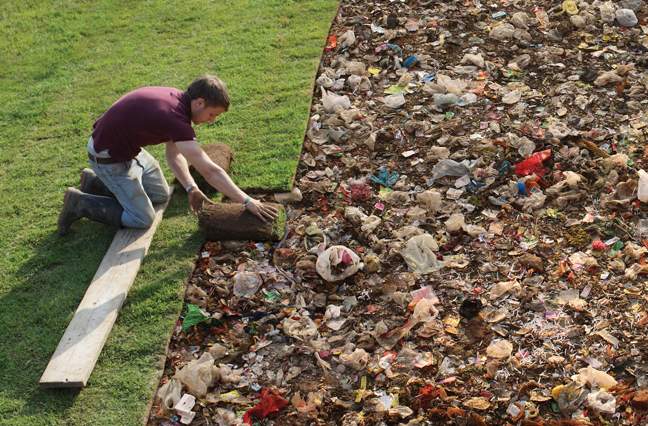 Much of what the future holds for the environmental coverage offered by XL Insurance’s North American property-casualty division is linked to the past.

Specifically, the concept, which gained acceptance in the mid-1970s, gave polluters cradle-to-grave responsibility for their waste disposal practices.

Hard as it is to imagine now, the idea of making polluters pay for their environmental damage, regardless of when it occurred or when it’s discovered, did not come into play until 1976, when Congress passed the Resources Conservation and Recovery Act (RCRA). That liability approach was expanded in 1980, when Congress enacted the Comprehensive Environmental Response, Compensation and Liability Act, commonly called Superfund, which allows the Environmental Protection Agency (EPA) to clean up abandoned hazardous waste sites and compel responsible parties to perform cleanups or reimburse the government for EPA-led cleanups.

“These were historic issues that people now realize have to be dealt with,” says Mary Ann Susavidge, chief underwriting officer for XL’s Environmental Unit. “Those things created the environmental insurance market.”

The RCRA and Superfund legislation, plus another law that addressed motor carrier auto pollution exposures (MCS-90), “created a liability that didn’t exist before,” Susavidge says. “With that liability, grew a new product, environmental insurance, because standard liability policies started to exclude pollution. Since that time, I would estimate that the market’s premium volume has grown probably 20% to 30% a year.”

“That would cover everything from agriculture to manufacturing to petrochemical facilities to landfills, wastewater treatment plants, mines, office buildings and schools,” Susavidge says. “Basically anything that has site-specific exposure and ownership.”

The second piece of the market that has evolved over the years is contractors liability coverage. This means project owners require contractors to obtain insurance to cover the cost of cleaning up waste materials they either create or make worse on the job site.

“It can be general contractors or plumbers or electricians, whoever,” Susavidge says. “All have the potential to bring contaminants to the job site that exacerbate a condition at the site or create one as a result of their work. In both cases, you can have contractual requirements in leases and lending documents that require such coverage, and it also can be part of good risk-management practices.”

As the nation begins to emerge from the economic downturn, one of the biggest areas of growth for environmental coverage is occurring in what is known as the brownfields sector—blighted properties that will need some sort of remediation to be developed.

“There are a lot of blighted properties in the country,” Susavidge says. “EPA estimates that there are 450,000 abandoned or polluted sites that could be brought back on line to be productive and useful contributors to the economy. To do that, the buyer, lender or builder may buy environmental insurance.”

EPA estimates that there are 450,000 abandoned or polluted sites that could be brought back on line to be productive and useful contributors to the economy.”

Although purchasing environmental insurance is not a requirement for the developer, Susavidge says it can be a way to make the deal work because the property value may be considerably less than the cost of remediating it. Until remediated, the value is limited.

“People are hesitant to invest the time or money to do that unless the outcome will generate income,” she says. “Insurance is a way to build the bridge between a property that is upside down in value and one that can be turned around to have value in the future.”

“Unlike other coverage, this is not on standard forms,” Susavidge says. “Each carrier puts together their proprietary product, which is heavily manuscripted based on the particular exposures. The coverages are highly engineered based on the potential exposures at a particular site. We underwrite by looking at all the documents available, evaluating the exposure and the potential for unknown and known conditions.”

Buyers and developers take on the project knowing there will be an expense, and the issue is whether they can balance the cost of cleanup against the end benefit of development.

“Environmental insurance facilitates that, and also, if you find something you don’t expect to find, it doesn’t bankrupt you or shortcut development,” Susavidge says. “We’ve been writing coverage for brownfield properties for the last 20-plus years, but there has been a resurgence since the economic downtown in the 2008-2009 time frame. In the last year and a half or so, we’ve seen this market be rejuvenated as the economy continues to improve and lenders are more willing to support these projects.”

The green movement and sustainability culture also have had an impact on environmental insurance.

“The key to environmental insurance is education,” Susavidge says. “People need to understand its availability, what it does, and what it can foster. As communities look to become more sustainable and are using green practices, it is driving a different mentality around risk management. We now see people purchasing environmental insurance because it is a good practice.”

That insurance, Susavidge says, essentially provides catastrophic coverage to protect against a problem that could arise.

“Something unforeseen could have significant financial impact if you are not prepared for it,” she says. “It is a means of managing a catastrophic situation.”

Michele Sansone also worries about a potential catastrophe. In her case, it’s a terrorist attack targeting a major commercial center or large public event, and Sansone, a property underwriter for XL, is concerned about whether or not Congress will once again extend a federal terrorism reinsurance program. When reinsurers, who bore the bulk of the insured financial losses of 9/11, left the market, insurers in many states stopped covering terrorism.

Congress then stepped in and in 2002 passed the Terrorism Risk Insurance Act, which created a federal government reinsurance backstop for terrorism coverage. The program was extended in 2007 for seven more years with several major changes, including eliminating the requirement that an act of terrorism had to be executed by individuals acting on behalf of any foreign person or foreign interest. The extension also revised the deductibles and overall coverage limits.
The federal backstop is set to expire at the end of 2014, and it is unclear whether it will be extended again, made permanent or dropped altogether.

“Our biggest unknown right now is how the government is going to proceed and how we will proceed if it stays the same or if it goes away entirely or changes,” Sansone says.

The federal backstop legislation requires all carriers to offer terrorism coverage. “Most of our large Fortune 500 companies want to buy terrorism coverage,” Sansone says. But XL and most other carriers have a sunset clause in their commercial property policies that allows them to stop offering coverage if Congress does not renew the backstop.

“Terrorism coverage is a product we want to be able to offer, but we also want the benefit of a federal backstop,” Sansone says.

“Terrorism coverage is a product we want to be able to offer, but we also want the benefit of a federal backstop.”

XL also is concerned about a repeat of the major losses sustained by commercial customers during Superstorm Sandy in October 2012. Since that time, XL underwriters have been working closely with engineering experts to better understand and calculate risks based on an area’s elevation and potential exposure to floods.

In general, XL is not offering commercial customers as much flood insurance as it was prior to Superstorm Sandy, and it’s charging higher premiums for flood coverage for heavily exposed structures.

In the future, XL also plans to offer a new property policy for its major commercial clients that place all their insurance coverage with XL as opposed to using multiple carriers with layered policies. The “Platinum Policy,” which will be offered beginning in early 2014, can provide up to $1 billion in coverage.

“We wanted to come up with something we thought was more creative and more market friendly,” Sansone says. “This is a simpler form to understand, and it has a few more bells and whistles with it.”