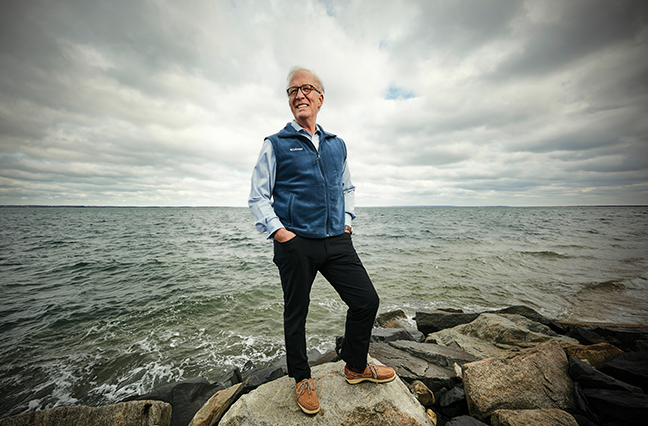 Rick Jensen is chairman of the World Federation of Insurance Intermediaries. Leader’s Edge founding editor Rick Pullen talked with him recently about issues facing brokers in the United States and on the world stage.—Editor

Tell us about yourself.

I had been teaching French and planning to be a professor, and I entered a program that was kind of experimental at the time to rehabilitate humanists and turn them into functioning business people. I interviewed with various firms in the business world of which I knew nothing and wound up going to Johnson and Higgins. Basically, they seemed like very good people. I had no idea what insurance brokers did.

I did lots of things at J&H over the years and eventually moved in 1992 to France. Having taught French at one time and being pretty good at it, it paid off. I wound up in Paris for four years with J&H. When I came back, I became international practice leader. We were acquired by Marsh. I went to HRH, which was bought by Willis.
So how did that bring me to WFII? I talked with people at The Council somewhere around 2002 and became one of their representatives at WFII.

How did you become chairman?

I’ve been around a long time, so sooner or later they were going to get to me. The chairmanship rotates among five regions of the WFII. It was our turn.

Where is WFII on opening new markets and the effects of Brexit?

Expanding into new markets is always very much on the agenda, specifically liberalization, so brokers can freely operate once they get licensed.

Brexit may be an issue because freedom of services where brokers could easily move around the European Union is potentially going to be much more challenging. The large brokers are already situated in and out of the new EU. But it’ll be interesting for other brokers. And we have many small broker members who are represented by the WFII. So Brexit’s an issue.

What about trade issues with the Trump administration?

The answer is potentially yes. There’s been a lot of discussion about border adjustment taxes, taxes on reinsurance and potential retaliatory trade barriers. We’re throwing up as many barriers as other countries are, but we could be facing some headwinds.

In the overall trade picture, insurance intermediation is collateral damage. But that doesn’t discount the importance of the insurance and broking function to make markets and provide crucial services to the global economy.

WFII seems like the only organization that can deal on a global basis with opening new markets. True?

We’re the only organization that lobbies on an international level for opening new markets. Plenty of private companies do too. We are all pressing for further liberalization in India, which is not a new market but which is certainly one that has been evolving. But WFII is not going to change it on its own.

There are countries that tend to be more challenging than others. I think we’re an influencer and an enabler and not unimportant, even if we’re not terribly well known.

What do you face when you want to expand into a market?

Then there are the unofficial things. What kind of informal hurdles are there? How fast do the authorities move? What are you allowed and not allowed to do?

We want a level playing field so intermediaries already in country don’t have any advantage over the next broker entering.

There are countries where our members are very welcome. Some countries love to have new brokers. Many in Africa are more than happy to have more brokers.

Is that always a problem entering a new market? Are regulators always looking out for the locals?

Historically, yes. It’s been a problem. I won’t say it’s a problem everywhere, and it’s less of one today. There are countries where our members are very welcome. Some countries love to have new brokers. Many in Africa are more than happy to have more brokers.

But, remember, the regulator’s job is often a mix of things. It protects consumers. It is insuring the health of the insurance industry in a given country. So inevitably you could run into some challenges. There are examples in the past where markets have been a little protectionist—either for brokers or insurers—in continents such as South America and Asia.

What do you see as some of the new emerging markets or potential growth markets in the next decade?

Certainly India, which has liberalized a lot of components of its market such as rates, policies and allowing in more insurers. The same for brokers. Originally, there were no brokers. Then a broker could establish itself. Then foreign brokers were allowed with a 26% ownership investment and 74% local partner. Now that’s changed to 49% foreign ownership. The 51% can still be a challenge. But India is focused on a long-existing and thriving insurance market.

It’s obviously a big country, and everyone wants to be there. But you could be present there in a bigger way no matter what size you are now—whether you have two people or 2,000—if all of the hurdles are removed. We need to remember it’s a process. At various times the winds blow a little more nationalist and a little bit more liberal.

Everyone talks about the continent of Africa, which is 54 countries. So it’s a matter of picking and choosing. Brokers have—the larger ones—advanced and retreated. They’ve bought into more businesses and then sold off some.

The Middle East is another focus. Saudi Arabia. UAE. Qatar is now problematic, given the political tensions in the area. That’s another area where there’s a lot of local control and the local regulations have been tightened on insurers and brokers in recent years. Saudi and the UAE, being the biggest economic engines there, are an area of focus. Those are definitely on the radar.

Then there’s always Asia, where things can always improve—and they have a lot. And, remember, China and Korea have been steadily liberalizing over the past couple of decades.

What is WFII’s biggest future challenge?

The second is the level playing field, particularly with respect to new kinds of entrants. Think about insurtech in its broadest sense. Let’s say we have a firm that brings insurtech solutions to the intermediary space.

Let’s make sure that firm plays by the same rules as do the established brokers or agents in that space.

The last one that is an ongoing concern is regulatory concern about life insurance. Regulators should not mix up a property/casualty and a life insurance with no investment component. That’s been the subject of discussion here in the U.S. and around the world.

Where there is an investment component, there’s the potential for greater risk to the consumer. So there is sometimes a commingling by regulators where they feel everybody should be regulated exactly the same.

We’re very, very concerned about FATCA. Does that apply to property/casualty or not? It shouldn’t. It’s a different kettle of fish.

Where do you think brokers will be disintermediated in the future?

It’s always a subject of discussion. The members of WFII who are closer to the personal lines and small commercial spaces have a greater concern than others. There has been an expansion of the direct market and online insurers in developed countries, which has been a trend for some years. It’s definitely in personal lines and in some low-end commercial.

Certainly in the lower end of the market I could see technology continuing to enable that. I don’t know how much disintermediation there is going to be as you move up market. If we looked out decades, I’d say we’ll probably have robo brokers 30 years from now. But who can accurately predict anything 30 years from now?

There may be some interesting experiments that really do pay off and change the nature of the market in terms of capital. Capital’s got to play by the same rules too. There ought to be a level playing field for capital, just as there is for conduct and intermediation and licensing and the rest. So I could see that perhaps changing some components of the market.

But I don’t see any reduction in intermediation in the near future as you move higher in the market. I see a whole lot more professionalization. Everybody knows professionalism, advice, service are really important.

They’re more important, in many cases, than the transaction and the delivery of the product.

Where does Blockchain stand with WFII?

It’s definitely on the agenda. It has been a subject of discussion. AIG made some noise about the first multinational contract, and there have been marine contracts done with blockchain. My own specialty has been multinational programs. And I can see a real benefit for them.

It’s definitely better than a bunch of marked-up pieces of paper or marked-up binders or cover notes. Revisions will be memorialized too. And everyone will be able to see it. Right now it’s kind of an expensive proposition. We’re still working on it. So even though it’s supposed to be frictionless, there’s still a lot of grinding of the wheels at this stage.

How long do you think it will take to implement into daily use?

I wouldn’t be surprised in five years if we didn’t see a notable increase. It would start among large companies.

Blockchain is good for complicated contracts. So there’s a lot of work that’s being done. One of the big things about multinational programs is doing it right, on time and with contract certainty. With an efficient, well understood blockchain convention and mechanism, we can do this.

Jensen is a managing director in Global Services and Solutions at Willis Towers Watson.