For 15 years, Rick Pullen did things differently than everyone else, changing the game for a trade rag.
By Sandy Laycox Posted on November 30, 2018 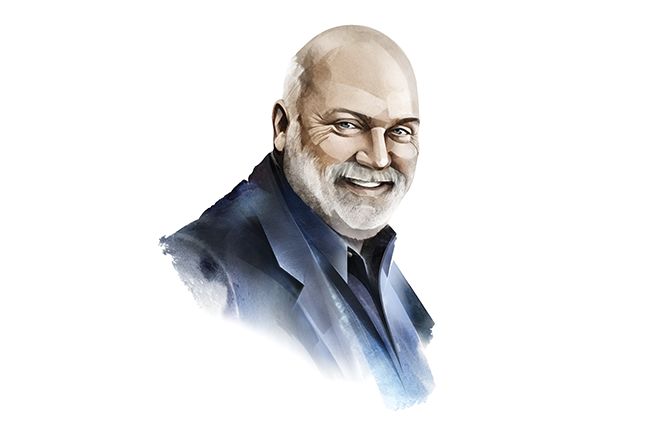 Leader’s Edge editor in chief Sandy Laycox sat down with founding editor and game changer Rick Pullen for a conversation on his legacy and future. Rick will be leaving Leader’s Edge at the end of 2018. —Editor

You’re retiring after 15 years of running Leader’s Edge. What was your vision when you and Ken Crerar first created the magazine, and do you think that you’ve achieved it?

I’ll answer the second question, first. Yes, I think we have. Ken used to send me notes when I was editor in chief of IA magazine, Independent Agent. And he liked what I did there, so he hired me to create a whole new magazine for The Council.

We had a lot of discussions and found right away there was no publication in this niche. I mean, it seemed kind of silly. There were probably 20 insurance business magazines at the time, and not a single one targeted commercial insurance brokers.

So we sat down and started talking about what we could do and do differently. Because with 20 or so magazines out there, we had to be different or we’d never get noticed. And that was a big concern of ours: how do you step into a field that’s already loaded with publications?

So we created Leader’s Edge to be really smart, visually pleasing, and totally about our members. It wasn’t about The Council.

We didn’t want to bore our readers, which a lot of the established publications did. So we decided to try something daring. I give Ken a lot of credit for doing this because we ran into a few obstacles along the way, but he stuck with it.

Leader’s Edge is visually different from everything else, and content too. But the first thing you do is you see it. What gives you your inspiration for the design and the way it looks?

I like it to look more like a consumer magazine. We have really long art meetings, as you know, to try to come up with cool ideas to visualize a story. Ask yourself this question: how in the world do you visualize insurance? I mean really, the whole idea is crazy. And yet, for 15 years, we’ve managed to do some really interesting things to achieve that. It’s not easy. We have stories that are very, very difficult to visualize. And so you use a lot of imagination. You find some really good designers, and you just put your heads together and throw stuff around, throw it up against the wall, and you see what sticks.

You are being honored as a game changer this year. Can you talk about what that means and also how you see Leader’s Edge in that role, as well?

Well, it’s a real honor. There’s no doubt about that. I think I’m a game changer because Leader’s Edge is a game changer. It really is just a lot different from all the other publications. One of the nicest compliments we had as a publication was when our competitors started to copy us. And several have over the years. So, yeah, it’s a very nice honor. But Leader’s Edge is really the game changer in the industry. It’s a first. The industry never had anything like it before.

Alright, now some fun questions. What was your favorite piece over the years? Favorite article?

Oh, that’s difficult. Early on, we did some investigative stuff, which is fun, about some of the regulators. Actually, the recent Q&A we just did with Vernā Myers I thought was fascinating.

There’s a story behind the covers. It’s indicative of the evolution of Leader’s Edge. We did a story about insuring body parts. It covered hand models, surgeons, actors and all types of people who insure different body parts because they rely on them in their profession. It was a fun story. So our creative director at the time, Ted Lopez, came up with this art, which was a pair of women’s legs in fishnet stockings, upside down, covering the table of contents.

We were very much a visual magazine, but we were still a little bit conservative back then. And when Ken saw that, he said, “That’s the cover.” And that sort of opened up, “OK, we can do a lot more with the magazine, as far as covers go.” So then we did. We started really pushing the edge on covers. Sometimes, too far, and they didn’t get published.

But one of my favorites was actually before the “legs” cover. The story was about benefits for aging baby boomers and the headline read “Aging of Aquarius.” We had a bunch of elderly people on the cover, and they were all women. My boss at the time, Barbara Haugen, said you can’t put just a bunch of hippie women on the cover. It was sexist. But we loved the art. So Ted put a beard on one of the women, so it looked like we had three women and a man on the cover. And you couldn’t tell he was a she. And they were all dressed in tie-dye and head bands. It was a classic.

There have been so many good covers. Another one of my favorites was about drones. We used a takeoff on a movie poster of Alfred Hitchcock’s The Birds, and in place of birds on the cover, our creative director Brad Latham put hundreds of tiny drones. I really love that cover.

We didn’t want to bore our readers, which a lot of the established publications did. So we decided to try something daring. I give Ken a lot of credit for doing this because we ran into a few obstacles along the way, but he stuck with it.

Is there any specific issue that has been your favorite to cover?

I guess it would be regulation. Our industry has a history of coping with a lot of shady regulators. I’d love to do more on that. It’s just so hard to dig into it and find it, but it’s out there. And that probably comes from my background of being an investigative reporter. I love the challenge.

What has been your biggest regret over the 15 years?

I always wanted to do a big takeout on the NAIC andjust really dig into what’s behind the NAIC, but that would take about a year’s worth of work.

Biggest lesson learned? And this will be helpful for me.

Biggest lesson learned. Oh, jeez. Well, I guess it’s this. No matter how hard you try, it’s never going to be perfect. And so work to make every issue a little bit better than the last one. You can’t do it all at one time.

I think that’s great, and I was going to ask you: what would be some advice for me? And I’ll take that.

Yeah, I think I just gave it to you.

So tell us what you’ll be up to come January.

Well, I write novels. I love to write thrillers. I’ve written three so far, that have been published. The first one, Naked Ambition, became a bestseller, which was nice—and shocking. The sequel, Naked Truth, was just published in September. I’m working on my fourth thriller, now. It’s a stand-alone. The working title is Borderline. It’s for my agent who has been bugging me for a long time to do a stand-alone. That’s due next summer, so I’ll be busy this winter.

I want to write a lot of books. Probably not all novels. Because writing novels means you sit alone for hours and write. I’d like to write some non-fiction books where I have to actually go out and play reporter again.

Well, we’ll look forward to what’s to come and maybe even a little more writing for you at Leader’s Edge?