Not ones to settle into their rocking chairs, these executives prove the right age is now.
By Chris Hann Posted on March 8, 2013 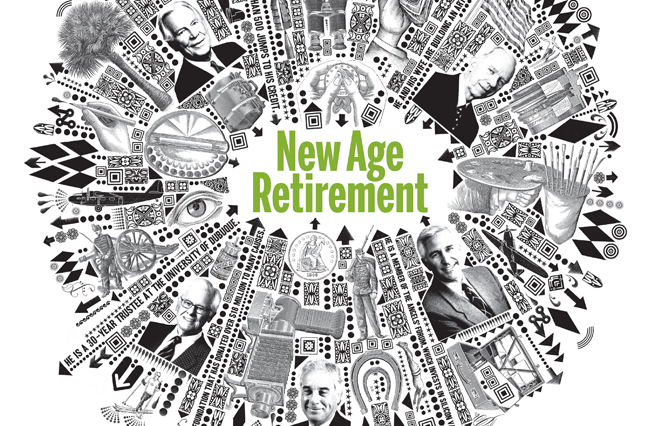 Ernest Hemingway called retirement “the ugliest word in the language,” and it’s a good bet there are at least five executives who would agree.

The very concept of retirement has evolved dramatically in recent years. A 2012 Gallup study found that the average working American expects to retire at the age of 67, up from age 60 in a 1996 survey. That’s an 11.6% jump in the expected retirement age in just 16 years. No doubt some delayed retirements can be traced to an unsteady economy. But the movement toward a longer working life was evident even before the financial collapse of 2008. Americans seem to be working longer and retiring later at least in part because they want to.

The five insurance brokerage executives we talked to embody this trend. Together they’ve compiled nearly 200 years worth of experience in the insurance industry. And even as they might be scaling back their work hours, they’ve not let that accumulated wisdom go untapped, serving as advisors, trustees and mentors. J. Hyatt Brown is building an art museum. Bruce Basso is leading a national charity. Fred de Grosz is financing entrepreneurial dreams. John Butler and Tom Williams still serve as chairmen.

“I didn’t have a plan,” Basso says of his decision to retire from Wells Fargo Insurance Services in April 2009, two months after de Grosz left. “But I had enough confidence that I knew I could find something to keep me busy. You need something to keep you mentally stimulated. I didn’t want to go back to working as hard as I worked since I was 15 years old. But I did want to be involved in the industry and have a chance to use all the knowledge I had accumulated during 40 years of growth.”

Basso’s confidence was well placed. Today he keeps busy as CEO of the Worldwide Broker Network and national board chairman of the Insurance Industry Charitable Foundation. “These are two very stimulating projects,” he says. “It gets me out in the industry and allows me to use my contacts I had previously.”

Basso has long had an interest in international business, so the Worldwide Broker Network, the world’s largest collective of property and casualty and employee benefits firms, seemed a good fit. He recently traveled to London, Brussels and Frankfurt, where he helped a member firm prepare a presentation for a multinational account.

“Listening to conversations and the way presentations are done—market by market, culture by culture—it’s very interesting,” Basso says. “I have the ability to mentor and help brokers grow their business and can give them an insight into areas of conflict, internally and externally, before they occur.”

Basso is especially proud of his work with the Insurance Industry Charitable Foundation, the industry’s largest philanthropic organization in the United States. Founded by Basso and a handful of other insurance executives in San Francisco in 1994, the foundation now has offices in Chicago, New York, Dallas and Walnut Creek, Calif. The group has contributed more than $18 million and its members have logged more than 155,000 volunteer hours for programs benefitting education, children, health, disaster preparedness and the environment.

“I decided if we’re going to do this thing, we’re going to do it big,” Basso says. “It’s been a quest we have been on to bring the industry together in such a way that it builds credibility and gives a sense of pride to an industry that has long deserved that.”

That idea has defined Brown’s semi-retirement from Brown & Brown. Since stepping down as CEO in 2009, after a half-century in the insurance industry, Brown, now 75 and still chairman, has worked to give back to the cultural and economic life of Volusia County.

Last year, Brown and his wife, Cici, donated $13 million toward the construction of a 27,000-square-foot art museum, which will house their collection of 2,600 Florida paintings—considered the largest such collection in the world. The Cici and Hyatt Brown Museum of Art in Daytona Beach is scheduled to open in 2014. “We want it to be representative of what we call ‘old Florida,’” Brown says.

While the museum takes shape, Brown is staying active in local business affairs. He and four colleagues founded the CEO Business Alliance, each committing $100,000 a year for three years to help attract businesses to Volusia County.

Did Brown have a plan for retirement?

Brown has also indulged his passions for travel and the Civil War. Last year he and Cici flew to Croatia and Montenegro and, with their son, Kellim, spent two weeks in China exploring the country’s rapidly expanding economy.

As chairman of the board, Brown still spends half his time tending to company-related matters. “I do basically what Powell asks me to do,” he says, referring to his son, J. Powell, his successor as CEO. “The nice thing is I’m not under stress right now. And it’s fun.”

“The nice thing is I’m not under stress right now. And it’s fun.”

When the subject of retirement is raised, Butler cites a recent Wall Street Journal story about Maurice R. “Hank” Greenberg, published on the occasion of his 86th birthday. When asked if he had ever considered retirement, Greenberg, the former chairman and CEO of American International Group who now leads C. V. Starr & Co., said: “I’m good at what I do, and I enjoy doing it. Why would I quit?”

Although Butler stepped down last year as CEO of the Dubuque, Iowa-based brokerage Cottingham & Butler, he is quick to remind you that, as executive chairman, he remains a full-time employee. He claims he works 24/7 but has a lot of fun along the way.

“We have an excellent CEO [David Becker] and other great managers, which greatly facilitates my happiness,” Butler says. “I spend my time trying to be a good coach, a strategist and a networker for our company.”

Now 82, Butler says he really started to transfer his CEO duties to Becker six years before formally relinquishing the title. “I was still very much enjoying what I was doing,” he says. “I have excellent health and energy, but it seemed prudent for the company to have some younger people playing really significant roles.”

Which is not to say that Butler retreated to the sidelines. He’s a 30-year trustee at the University of Dubuque and president of the Grand Opera House Foundation, having helped oversee (and finance) an ambitious restoration of the 1890 building.

He has also done some traveling. With his wife, Alice, he spends parts of each year at their home in Telluride, Colo.—skiing in winter, hiking and biking in summer. In January, they spent two and a half weeks in New Zealand. “We started at the north end of the north island and ended up at the south end of the south island,” Butler says. “I like the culture, I like the people, and the scenery is fantastic.”

His secret to a good non-retirement?

“I don’t want to make anyone feel bad,” he says, “but it does help if you have someone in your life who you love and who loves you.”

The Butlers certainly have that. Last Dec. 27, John and Alice celebrated their 60th wedding anniversary.

These days, de Grosz serves on two boards of directors, advises his son and daughter on their own business ventures and participates in a Silicon Valley investment group called The Angel’s Forum. “Between all those things and trying to get to our home in Carmel,” says de Grosz, a former chairman of The Council, “I find I don’t have time for golf.”

De Grosz began his insurance career in 1971 as a co-founder, with Doug Alburger, of ADI. In 1990, the company merged with Mario Basso Agency to form ABD—the firms had a combined $8 million in annual revenue—for which de Grosz served as president and CEO. He stayed on after Greater Bay Bancorp purchased ABD in 2002 and after Wells Fargo purchased Greater Bay five years later. ABD grew to $170 million in revenue when it was acquired by Wells Fargo. In 2009, de Grosz retired as vice chairman of Wells Fargo Insurance Services. “Bruce and I had such a fabulous run, there were not many things for us to conquer, so the timing was right,” de Grosz says.

As a member of The Angels Forum, de Grosz is one of two dozen investors who consider proposals by entrepreneurs working in a variety of fields. A handful of Forum members will screen proposals, then each week all 24 members convene to hear the entrepreneurs make their pitch. De Grosz likens it to television’s “Shark Tank.”

“It’s fascinating,” he says. “There’s no question it’s an intriguing, exciting, fun thing to be a part of. If we sense a significant desire to invest, we form an LLC, and we invest as one group. There’s such an immense aggregation of guys with good ideas. A lot of that is probably a function of living in the most exciting community probably in the world in terms of angel investors.”

De Grosz also delights in the opportunity to help his son, Kurt, and daughter, Kerri Stenson, in their entrepreneurial pursuits. Last year Kurt, along with business partner Brian Hetherington, began a new insurance venture under the ABD banner. Earlier this year, Kerri, a lawyer, began a new career as publisher of Edible Silicon Valley, a quarterly magazine dedicated to the local food movement.

You wouldn’t expect a guy who’s been a psychological warfare officer in the Army’s Special Forces, who’s an experienced pilot and underwater diver, and who has more than 500 skydiving jumps to his credit—you wouldn’t expect that guy to go silently into his retirement. And Tom Williams has not disappointed.

Having started his first insurance agency back in 1970, and having served as president, CEO and chairman of InterWest Insurance Services since its founding in 1992, Williams retired as CEO in 2008. “But I told my board the chairman job was a good job,” Williams says. “I kept that one.”

Today he maintains homes in Sacramento, where InterWest is based, and in San Francisco. But Williams, who turns 79 this month, spends more time at his ranch of “several thousand” acres in the foothills of the Trinity Alps in northern California. Williams, who was raised in the Kentucky hills, calls it Solitaire Ranch.

“I’ve always enjoyed the solitude of the mountains,” he says. “I thought about a lot of names, and Solitaire just kind of fit for me.”

As someone who says he chokes on the word “retirement,” Williams still devotes half of his time to his duties as chairman of InterWest and a trustee for several other businesses. He also helps advise his four entrepreneurial-minded children. “They’ve been at it long enough to know the old man knows a few things, too,” Williams says. “I’m just enjoying the fruits of having done these things for a long time.”

Back at the ranch, Williams does the things he’s always enjoyed doing but didn’t always have time for—like fly fishing and kayaking and riding his horses. He keeps four of them, down from 15, although several herds of wild horses roam his property. “There’s enough land there where I can spend a day and never see the same place twice,” he says. “I was riding horses by the time I was 3 years old in the Appalachian Mountains. All the things I enjoyed doing growing up, I enjoy doing now.”