Lifestyle Famous Who Claim Us the Jan/Feb 2019 issue

Receiving from the Bench
By Louise Lague Posted on January 22, 2019 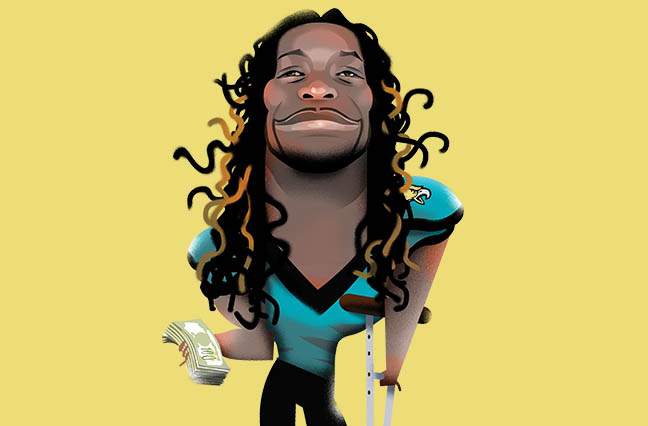 Having a back fracture and one bum knee is no fun, but when Philadelphia Eagles running back Jay Ajayi tore an ACL in the other knee in October, he was out for the season.

Fortunately, there’s a little painkiller to help: he stands to claim up to $5 million after taxes because of a loss-of-value policy he wisely bought before the season.

Ajay, 25, who helped the Eagles win their first Super Bowl in 2017, was only five weeks and three touchdowns into the new season when he stumbled during pass protection during the second half of the Eagles loss to the Minnesota Vikings. With a torn ACL in his right knee, he played through the injury for the rest of the game. He had surgery several days later, but the typical recovery time from ACL surgery is nine to 12 months, which means he won’t take the field again until training camp in 2019.

The well-dreadlocked London-born running back has been injury prone since his days at Boise State and was wise enough to know how to handle further hurt. Ajayi’s business manager, Josh Sanchez, told NFL reporter Ian Rapoport that Ajayi was “valued as a significant free agent” and decided “to protect him against exactly what ended up happening.”

Warmack signed a one-year, $1.5 million deal with the Eagles in 2017 and thus bought insurance that would pay out if his second NFL contract paid less than $20 million. Lloyd’s of London announced it would give him $3 million. Unlike pour Ajayi, only his pride was hurt.