Lifestyle Fast Tracks the May 2018 issue

Chilling by the Chicago River

The newly finished Chicago Riverwalk is part of a 15-year project that has turned an open sewer into a unique urban asset.
By Carrie Williamson Posted on May 1, 2018 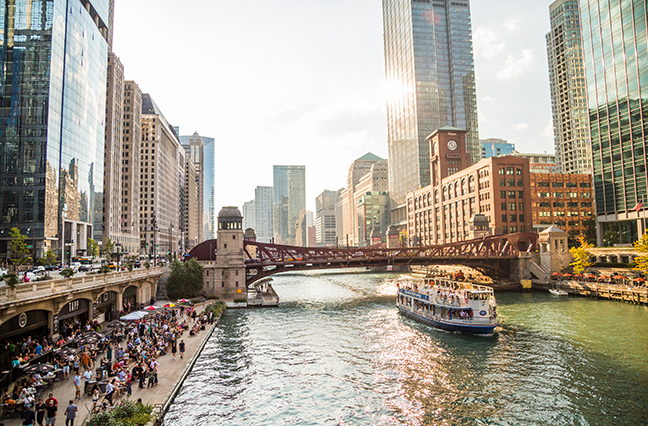 The Broker Smackdown Midwest 2018 will be held in Chicago from July 10 to July 12, the perfect time to explore the city’s newest attraction, the Chicago Riverwalk.

Stretching 1.25 miles from Lake Street to Lake Michigan along the south side of the Chicago River, the third and final phase of construction on this riverfront park was wrapped up at the end of 2016. Among the many honors it has received are two from the American Institute of Architects (AIA), one for Architecture and the other for Regional & Urban Design. AIA was effusive in its praise: “This is an exemplary urban intervention; the design and execution are perfect. The impact on the community is transformative.”

This is no small feat. The river used to be an open sewer. In 2002, the city started working to clean it up, and in 2015, it opened a new water treatment plant, improving the quality of the water significantly. It is now extremely popular with a variety of birds and locals. One of those locals, Carol Ross Barney, is the architect behind the 15-year waterfront project. As she said in an interview in the “2017 Chicagoans of the Year” issue of Chicago magazine, “The big success of the Riverwalk is it has repurposed this really important urban asset and basically returned it to the people.”

You can stroll unimpeded for the six blocks of coves, or “rooms” as they are called, which are found in between the bridges that cross the river. Under the bridges, curved panels of polished steel buffer the street noise and reflect the water. Each of the rooms has a distinctive design and purpose. The Marina connects the Vietnam Veterans Memorial to the new portion of the Riverwalk. You can dock a boat here and enjoy the view from the upper dining terrace and built-in bar. At The Cove, you can stop for a snack or rent a kayak. Concerts are held at The River Theater, where a slope of trees, steps and seating leads down to the river. The Water Plaza is a sunny cove where children can play in the fountain. The Jetty has floating wetlands gardens and seven piers where people can fish, bird watch and learn about the river’s ecology and canals. Finally, at The Riverbank, floating gardens meet the confluence of the three branches of the Chicago River.

There are many places to eat and drink along the Riverwalk. You can grab a hot dog from Lillie’s Park Grill to enjoy while sitting on a bench by the water or sit on the patio at City Winery for a glass of wine and some charcuterie. Keep in mind that all the chefs nominated in the Great Lakes region for the 2018 James Beard Awards for best chef are from Chicago. Their restaurants include Boka, Elske, Fat Rice, Parachute and Roister (the first three are included below). That’s five good reasons to venture further afield.