Q&A with Rob Guigley, VP of Sales and Health Plans, Omada Health
By Tammy Worth Posted on March 28, 2018 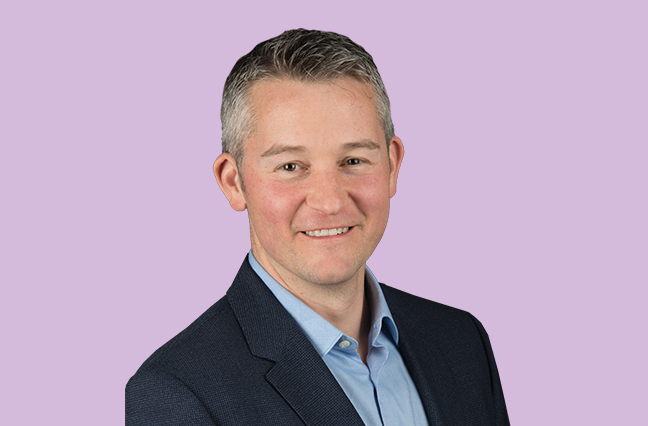 Q
What is the target of Omada’s program?
A
Digital therapeutics are aimed at combatting obesity-related chronic diseases like hypertension and high blood fats. When you combine cardiovascular disease with those, you have the number-one health challenge in the world. There are a lot of other diseases we are trying to get our hands around, but obesity-related ones are clearly an issue: there is a 2030 projected spend of over $1.2 trillion annually on them. That makes it worth focusing a lot of attention here.
Q
What is the difference between digital therapeutics and digital health?
A
The term digital therapeutics is used to differentiate this subcategory of digital health, which treats diseases by modifying patient behavior through digital programs and then tracks it via remote monitoring. The difference is that it’s evidence based. It’s not just a digital product that augments a medical product.

There are a lot of digital health products not based in science or proven to have the outcomes they claim. What an employer wants to pay for is something they know is going to have a good outcome. In medicine, it would be unacceptable not to have proven data.

Q
How was Omada’s program built?
A
Our founders were relooking at this space and saw bodies of literature out there, some of which were being acted on on a small scale but which had a lot of opportunity for being grown and developed further. One of those was the Diabetes Prevention Program, whose results were published in The New England Journal of Medicine in 2002. People were being enrolled in the DPP but not at scale. So we asked how we could take this proven method and apply it in a scalable fashion, make it personalized and help affect that cost curve overall. Omada was built out of that.
Q
How did Omada take the DPP work and create a digital program?
A
The initial body of work looked at a subset of people who were prediabetic and, if left untreated, 5% to 10% of that group would likely become diabetic each year. This is a large public health challenge with about 84 million people in this prediabetic category.

The CDC published this work that compared three groups of people with prediabetes. The first received intensive behavioral counseling, the second group received metformin [used to treat high blood sugar in people with Type 2 diabetes], and the third got a placebo along with basic advice and information from a physician. People who received behavioral counseling had a 58% decreased progression rate to diabetes. That was a significant improvement over the groups that took the placebo and metformin.

A lot of the work in the DPP was in-person settings with a health coach and lessons, and that model was very effective. However, when you are talking about working with 86 million people, you can’t scale that to meet that challenge. A digital format allows you to reach a larger number of people and collect data points to customize and personalize the experience for every individual in the program. Everyone going through has a slightly different experience based upon their inputs and how they interact with their health coach.

Q
What does the Omada program look like?
A
Omada follows a CDC-approved curriculum. We use a virtual health coach and a cohort of like individuals to go through the program together. Tools people use will vary. Each person gets a cellular connected scale, which is an important element because self-reported weights aren’t very reliable. And from a behavioral perspective, there is value to having it auto-transmit into an account so they can see weight loss.

The elements of the program include weekly lessons for one year around changing food habits, increasing activity levels, preparing for challenges and reinforcing healthy choices. Participants are expected to weigh in daily. Most people stay in for up to two years. More than 140,000 people have been enrolled in the program since its inception.

Q
What does the program cost?
A
We work with either self-insured employers or insurance companies as a covered preventive benefit for clinically eligible individuals. Because we operate as a benefit like this, we are able to charge organizational customers (employers or insurance companies) on an outcomes-based pricing structure. We do charge the employer/insurer when an individual enrolls; this mainly covers our marketing costs, as well as the cost of the welcome kit for the participant. From there, we charge the employer or insurer only if the participant achieves the desired health outcome (weight loss). We would invoice the employer/insurer monthly, based on how much weight the participant has lost and maintained—so not only is our business structure incentivized to create initial weight loss; we’re also incentivized to maintain that healthy outcome for as long as possible, because the better the outcome, the better the revenue. As long as our contract with a participant’s employer or insurer is ongoing, the participant will never pay any out-of-pocket cost for Omada.
Q
What about ROI?
A
Of course, morbidity and mortality and prevention of disease are the most important elements, but cost savings is also something we are trying to achieve and is really important too. The program has been proven multiple different times to have meaningful cost savings as early as eight months in.

We did a claims analysis on a large cohort in one payer program started in 2014, and as compared to a propensity matched cohort, there was a $1,338 cost differential among people who went through the program in one year. This didn’t include the cost of program, but it is still in the positive if included.

When it was broken down, inpatient and ER visits were decreased. Only pharmaceutical spend increased slightly, but that’s because people were more compliant with their care, which we want to see. But even that was more than offset by other spend. Generally, within one year, Omada participants lower their risk of Type 2 diabetes by 30%, stroke by 16% and heart disease by 13%. After 16 weeks, individuals, on average, lower their body weight by about 4%.

Q
What does demand look like from insurers and employers for wellness programs?
A
It’s really strong. People are realizing this is the number-one health challenge, and anyone who has risk for a population is interested in stemming these costs. It’s difficult to find an employer who doesn’t think this is a challenge. From a payer’s perspective, once they prove the cost savings, they want to make it broadly available.
Q
Not all wellness programs are effective. Why are some unable to effect change among participants?
A
A lot of companies are quitting wellness programs because they have tried them and consistently haven’t gotten good outcomes. You have to have clinical evidence and studies that show the effectiveness of the products.

Compare it to something like chemicals pharmaceutical companies study and how few of those make it to market. If they put every chemical that came out on the market, there would be lots of failures. In the digital health space, anyone that has something that seems like a good idea and can get money can bring it to the market. There are going to be a huge number of failures there, too.

When analyzing wellness programs, brokers need to look at whether they are based in science, if pricing is based on outcomes, if there is published, peer-reviewed evidence that shows that that specific company’s program works, and if they are personalizing the experience. If a benefits buyer is evaluating potential partners with that level of rigor, it can sort this out. We just haven’t always applied those standards to wellness programs.

Q
What do you know about long-term results of the program?
A
We have studied it for up to three years and shown durable, long-lasting outcomes both from a weight-loss perspective and reduction in HbA1c (blood glucose concentration over two to three months). We will continue to study it as people are in the program longer. The cost savings would be expected to extend for a longer duration, because we know people are maintaining metrics that yield outcomes. But to my knowledge, no one has studied total cost of care claims beyond one year. The Diabetes Prevention Program in general has benefits of up to 10 years. As that is around longer, we will continue to study that. Right now, outcomes look fantastic from a durability standpoint.
Q
Have you looked at the impact on conditions other than diabetes?
A
We have studied other conditions. They include elements like hypertension, high blood fats and broader obesity in general. We have seen significant reduction in hypertension and triglycerides.

Even though prediabetes is the heart of what we are working on, we don’t just deal with that. We enroll people who are overweight or obese with one or more other risk factors like hypertension or high cholesterol. We can use a questionnaire with a risk-based screener to see who is eligible, or employers’ biometric data can be used to prequalify people for the program.

Q
How can organizations like yours help employers encourage people to take part in digital wellness programs?
A
At Omada, we have a large engagement team. We work with an employer’s or health plan’s marketing team as a partner and learn what they have done in the past to engage people. But since we have done this well over 150 times, we bring out all of the elements that work best for an optimal campaign to get the most individuals in the program up front.

We optimize and co-brand with the purchaser, and we also have it announced by a leader in the organization. We don’t talk a lot about weight loss but, rather, about a new benefit that will help them improve their lives. We couple our knowledge with the best practices within the organization to get good results.

Q
With such a focus on engagement, what kind of uptake do you get?
A
Within the known risk population, we can expect to get 20% enrolled. For anyone who has done this before—engaging in programs where you are asking people to enroll or participate—this number is world-class.
Q
That seems like a small number of people actually taking part. What is “normal” for these kinds of programs?
A
From the outside, you can look at it like, if 20% enroll, it means that 80% didn’t come into it. And yes, there is still a long way to go. Part of the reason people don’t enroll is it’s just not the right time for people. In fact, according to a 2016 U.S. Chamber of Commerce report, more than 80% of people are just not ready to take action and make lifestyle changes at any given time. So, we continue to run refresh campaigns to connect with those people at a later time. There’s a lot of different reasons why it isn’t appropriate or people don’t feel like they have the time, so we try to get around those elements to let them know this is something different.

A lot of these folks have fought with this and been in weight loss programs in the past. So we make sure to tailor content so they realize it is something that will have an impact and we let them know they probably will have different outcomes this time.